Market Down Again, No Surprises from BTC and ETH, Hard Times for LTC and XRP

Dmitry Cake
Bears didn’t take long to recover. The market is red again with Bitcoin struggling close to support line, while Litecoin and Ripple are in trouble. 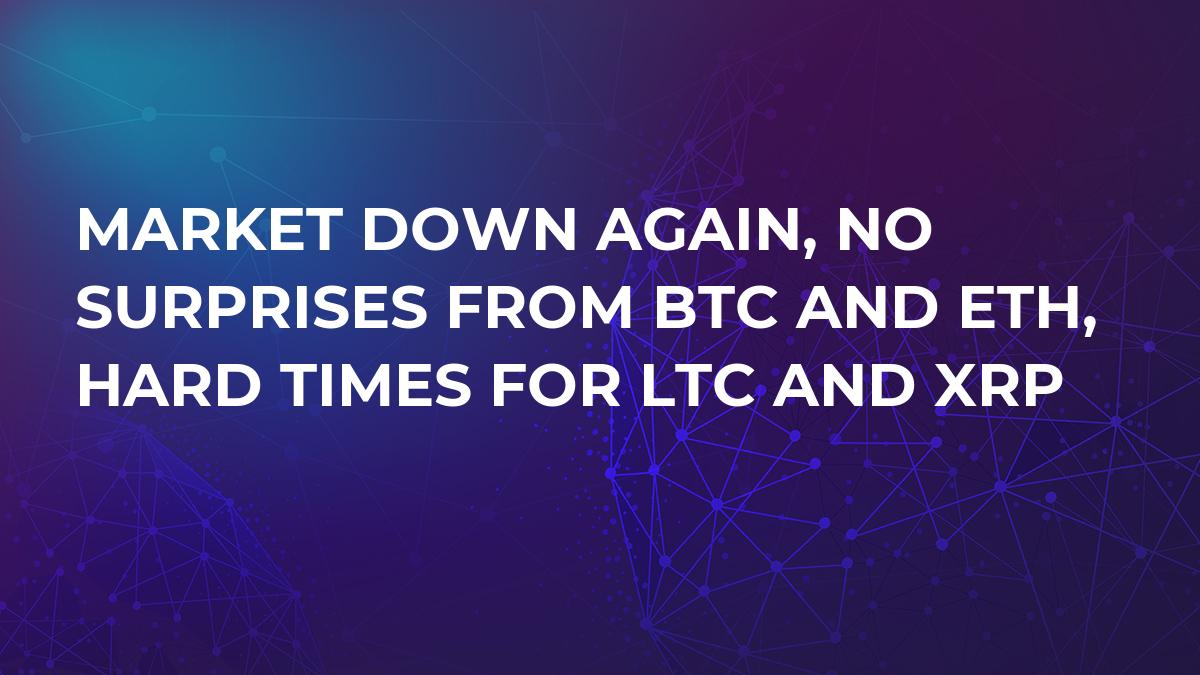 Having let the young bulls feed on the cryptocurrency pastures for the weekend, on Monday the bears came out of their dens and showed the market who is (still) the boss. Two days of upward movement were corrected literally within two hours, and investors were left with deceived hopes, again. We have repeatedly warned our readers about remaining cautious - in the context of a global downtrend, any local successes may turn out to be a trap.

As a result, the market lost about $10 bln, and the total capitalization by the beginning of Tuesday is $260 bln. Bitcoin dominance is declining for the second day - this time, to 44.3 percent.

Despite the fact that the most assets are in the red, some projects continue to push against the trend. Primarily, these are our old acquaintances Verge (with an increase of 18 percent) and Ontology (plus 14 percent).

They were joined by Golem, growing by 12 percent, Mixin, with an impressive increase of 45 percent (which looks more like a pump) and Polymath with 25 percent of growth. Coins from the top 10 are moving in harmony today: the decrease was 3 - 6 percent for all assets.

Yesterday, the bulls failed to achieve the goals that were assigned to them through technical analysis, and as a result Bitcoin could not hold on to the hard-won levels. A 10-day maximum sale volume forced the price down to $6,620, once again testing the strength of the ascending channels. One of them (formed in the middle of July 207) was easily broken, the second (from March 2017) is holding for now - and Bitcoin ended up in a trap.

If buyers are able to escape this trap within a few hours, then today we can expect lateral trading from current values ​​to the levels of $7000 - $7100. The price is inside the parallel descending channel again, the boundary of which creates an additional obstacle. At the same time, the chart is showing a fully formed bearish flag, the activation of which will point toward $6000, if the sellers lower the price below the yellow support line. The situation remains uncertain.

Another Bitcoin drop prevented Ethereum buyers from fully activating the saucer figure. The price reached $430, which is $10 less than the goal from yesterday's review, and began the correction. The good news is that the depth of the drop was only $30, which inspires some optimism given the weakness displayed by ETH investors earlier.

The crossing ​​of the 0.236 values of two Fibonacci grids clearly indicates the key level for Ethereum, from which the most significant movements will occur - this level is $415. Transition to confident growth is possible only after the price gains a confident foothold above that. In the negative scenario, $360 is still a serious support - investors will certainly do their best to protect it.

From the point of view of both technical and fundamental analysis, Litecoin looks entirely unattractive for investment at the moment. It’s enough to look at the chart to see this.

LTC is inside a long-term descending channel and there is no hint of impending change. Not only is the price dangerously close to the critical level of support, the trading volumes fail to confirm any interest from buyers.

In addition to all the troubles, the chart shows a forming figure that distantly resembles “head and shoulders,” the activation of which takes the price to $90. We don’t expect such a dramatic development, but neither can we rule it out. At a more conservative estimate, the target for bears is the range of  $100- $105. Our recommendation to refrain from trading Litecoin is still in force.

The current situation with Ripple is so similar to Litecoin that the same conclusions can be applied to both. The price of XRP is also clinging to the critical support, the chart also shows the formation of something similar to "head and shoulders," trading volumes are more than modest.

There are no hints of growth, while the targets of a possible further decline are very clear: if $0.45 does not hold, the bears will aim for the range of $0.42 - $0.4. It’s unadvisable to even think about entering long positions, until there are at least some positive signs - about which we will happily inform our readers, of course.