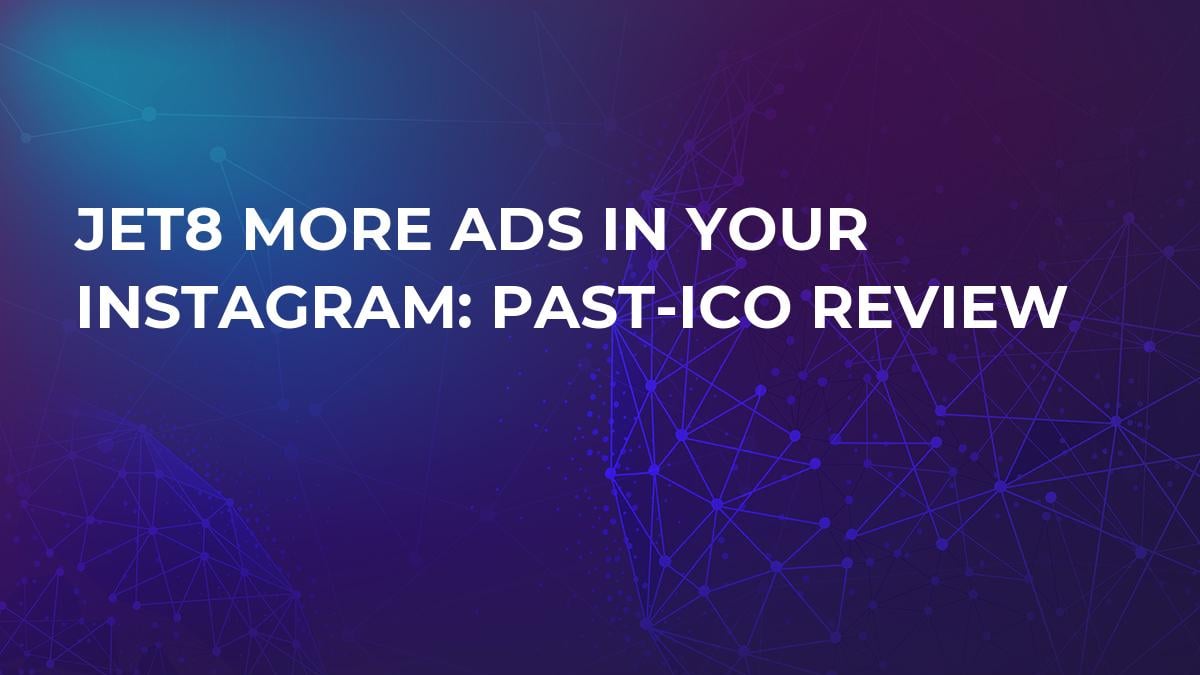 The marketer’s dream: get your target audience to participate in marketing and push products through social media with stickers that users can put on their Instagram accounts or special frames from their pictures with product branding.

That is the premise behind JET8, a Singapore-based marketer that is rewarding users with tokens for promoting brands. The tokens can be redeemed for purchases in stores such as 7-11, Alfamart and Circle K around Asia. The SEC and the IRS in the US are going to have a field day with the token.

While the company was founded back in 2014, the token was not launched until March 8, 2018, two days after the ICO ended.

The company has had close to four years to build its own brand and identity before launching the ICO and while it had a good ICO, the JET8 token has not seen much action.

It entered the market at $0.0347 and over the course of a month fell to $0.01, losing two-thirds of its value before being lifted up to $0.022 for a short period and again falling, then surging back up in May and now sliding down to $0.0136 down about 86 percent from its all-time high, which was its debut.

Tokens that that have downward trends after their initial release tend not to fare well over time. There is a reason that investors are selling them off.

Let’s look into what it could be.

The good and the bad, the marketer will sell you them both

While the design is novel and in an era of the gig economy, many people will think, “why not become a gig advertiser and get paid for it?”

Leave the Uber car at home and start taking selfies and adding badges and frames to push products and get rewarded for it. While you are at it, get your Uber car wrapped in an advert and take pictures of it and add your own badge for extra rewards!

Before I continue, I am not endorsing this kind of action, nor promoting shameless advertising tactics. However, it is this very action that will start to ruin it for everyone.

Rampant adverts will desensitize the masses

Herein lies the problem. Advertisers will reap rewards at first as users push ads to get rewarded. Then, the magic fades and people will start to get sick of their friends’ endorsements, the practice will become despised and hated and it will die off as quickly as it appeared.

Furthermore, if such a system came to the US, you better believe that Uncle Sam is going to get his cut. The redeemable tokens are going to be seen as cash by the IRS and they are going to want to tax it as income, and later introduce a sales tax to tax anyone who uses it to pay for goods or services.

As you may already know, governments are slow to react, and JET8 advertising will already be in its waning twilight when the government implements its tax on the crypto. That tax will be the final nail in the casket, as people are already moving away from the app and now the government wants to jump in and take a cut. The remaining users are going to drop that like a hot potato.

While it has a lot of cool marketing angles, JET8 does not leave much for people to have in the long-term future because sending pictures to each other is one thing, but sending pictures every day or every few hours with an advert is another issue that no one wants to be spammed. With the longevity and sustainability of this project diminishes. JET8 is not going survive the fall.