Greed is Haram: How Islamic ICOs Can Conquer the World 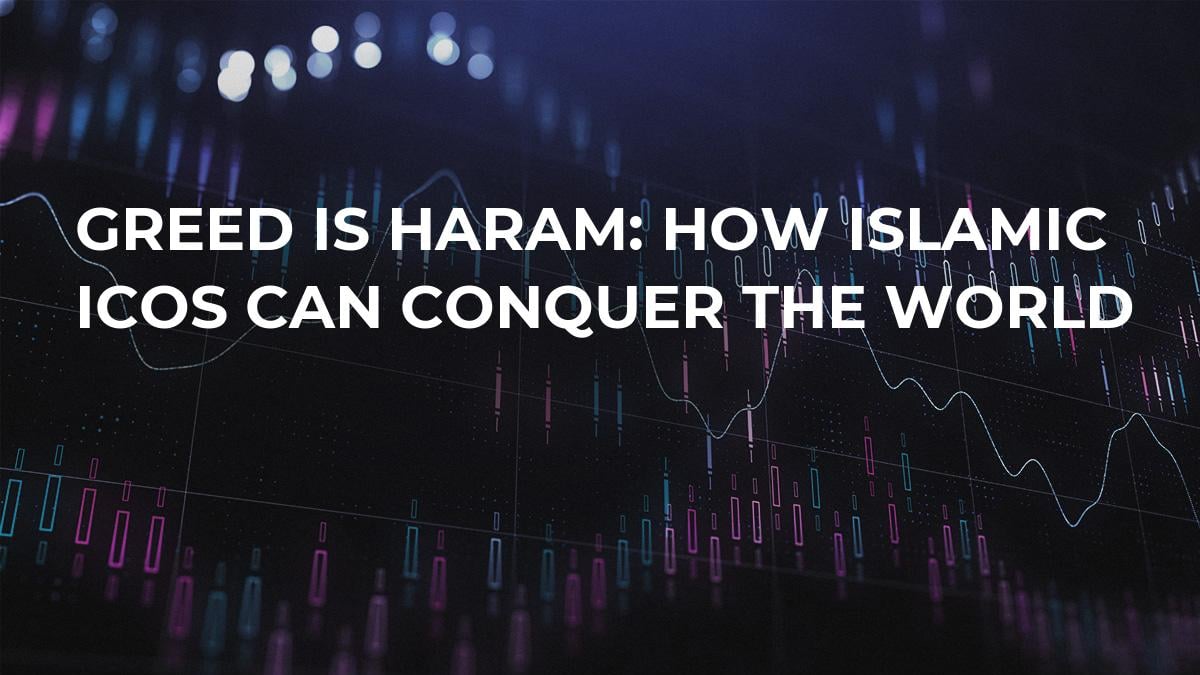 Abrahamic religions have always had a problem with money lending. Judaism expressly prohibits to levy interest on loans granted to a fellow Jew, and some Judaic scholars even extended this norm to non-Jews who show consideration for Jews. Nevertheless, the actual stance of Jewish theologists allows charging interest on loans provided to non-Israelite. Christianity shuns lending with interest, too, so, for example,  Roman Catholic church has never officially permitted charging interests - it just stopped enforcing this ban with the rise of capitalism. Islam, the youngest of Abrahamic religions, is the most strict on interest-bearing money lending. Riba (interest) is strictly prohibited in Islam, as well as money trading.

From the other hand, Dr. Aznan Hasan, of International Islamic University of Malaysia, states that “Private Equity and Venture capital are a “natural fit” for Islamic Finance,” because Islamic finance “praises the employment of financing in real economic activities” [as opposed to money trading, and creation of money from money].

The number of Islamic banking institutions is growing. They offer Sharia-compliant loans, mortgages, and other financial instruments.

Islamic financing may give an opportunity worthy of consideration for bonafide Blockchain projects that aim to raise funds from wealthy Islamic nations.

The only major consideration is that  businesses seeking financing must be Sharia-compliant: it must not be involved in haram (prohibited) activities, such as alcohol or other intoxicants, money trading,  lending with interest, gambling, lotteries and others.  A competent Islamic institution can accredit Sharia compliance. Also, projects should not imply an excessive risk, to be considered a Sharia-compliant. Companies that go for Islamic financing should have a Sharia-compliance advisor or Sharia board.

Sharia-compliant financing operations are often structured in such a way that the lender and creditor become partners in a joint enterprise and jointly participate in its profits and losses. The interest isn’t fixed, but rather pegged to projects’ future profits.

Islamic instruments are still considered securities under US Securities Act, so they cannot be offered to any ‘US Person’ except for a limited private offerings, or other exempt cases, unless registered with the SEC.

One mode is called “mudharabah,’ and is very similar to venture financing. Under terms of ‘mudharabah’ or profit sharing contract, the creditor (‘abb-ul-mal,’ or silent partner), provides 100 percent of the capital to ‘mudarib’ (entrepreneur). An entrepreneur invests his knowledge and skills to promote a project for a certain time.  Abb-ul-mal is usually an Islamic bank or Sharia-compliant investment fund that accumulates monies from the depositors and passes earnings and losses to them. An angel investor can also act as one.

Mudharabah financing can then be split between many investors in the form of Mudharabah certificates. These certificates are considered securities, so they may require filings, similar to SEC, under Islamic financial market regulations of the country where issued. However, a smart contract token that recreates a mudharabah certificate is technically feasible.

Abb-ul-mal, the sleeping partner, has no rights to interfere in day-to-day management of the enterprise (yet it has the right to oversee their operations). A mudharabah contract can be terminated by the parties anytime, unless ‘mudarib’ (the entrepreneur) have already commenced to carry out the work or parties have agreed not to terminate the agreement before a certain date.

In case if the financed project carries a loss, ‘abb-ul-mal’ loses the capital, and ‘mudarib’ loses the time and effort invested (unless there’s mismanagement, entrepreneur is not responsible for losses). If there’s a profit at the end of the project, it is split between the two in the pre-agreed proportion.

A variation of joint venture scheme in Islamic world is called Musharakah or profit and loss-sharing arrangement. In that mode, multiple partners offer financing for a project, yet also have a right to work for the enterprise, and have a say in how its managed. This is not obligatory though, and financing partners can remain sleeping if musharakah agreement stipulates this. They receive a share of profits, in accordance with their agreement, not exceeding their share in the capital. Partners who also work for the enterprise may be entitled to a higher portion.

Musharakah is an unlimited partnership (meaning that, all partners, both sleeping and active, share both profits and losses). However, a musharakah agreement may stipulate that the active partner must not incur debts during the course of business, and if he does, it will be his responsibility. The same applies to fines or consequences of mismanagement. So, when carefully structured, musharakah can become a limited partnership.

All in all, Musharakah is essentially a centuries-old Islamic version of crowdfunding. It is not a common form of financing nowadays though, due to the complexity of managing it when many partners are involved.

But Blockchain is a perfect tool to resolve this problem and bring Musharakah back to life. A smart contract token following Musharakah principle is easy to implement and may present a valid legal alternative to structure an ICO of a Sharia-compatible project, especially for the projects from Islamic countries or targeted to serve users from Islamic countries. Given the legal possibility of “having a say” in management of the enterprise, Distributed Autonomous Organizations can be built on the base of Musharakah principle.

So, Sharia-compliant ICO should probably be based on Musharakah: smart contract-based tokens may represent a mean to distribute agreed shares of profits between partners, granting a possibility to vote on crucial issues.

Islam has a centuries-long tradition of charity and giving to the community. Projects that are not aimed at enriching their owners, but offer them reasonable compensation for their efforts to further the well-being of Muslim community (especially, its poor and underprivileged members) can look for interest-free loans (Qard al-hasan) from Islamic benefactors. The receiver of the loan must return the loan, and it is optional to add something to the body of loan as a token of gratitude.

Islamic models of finance limit the possibility of speculative trading, because of its similarity to gambling. It is prohibited, for example, to sell a debt with discount or premium, only at face value. So, chances are high that it won’t be allowed to transfer a token that is used to manage musharakah partnership, with a mark-up. On the other hand, the musharakah model offers better security of the investment: it can be arranged that any partner’s share can be purchased back by any of the partners.

But, after all, it is exactly the speculative trading the very thing that sometimes plagues productive enterprises of the West. Islamic finance favors more meaningful investment model that is based on actual performance of companies.