Future of Crypto is Selective Transparency: Rob Viglione of ZenCash on Privacy Protocols

Katya Michaels
As concern about government grows, privacy coins are attracting more attention. But are they a promising investment or a haven for criminals? 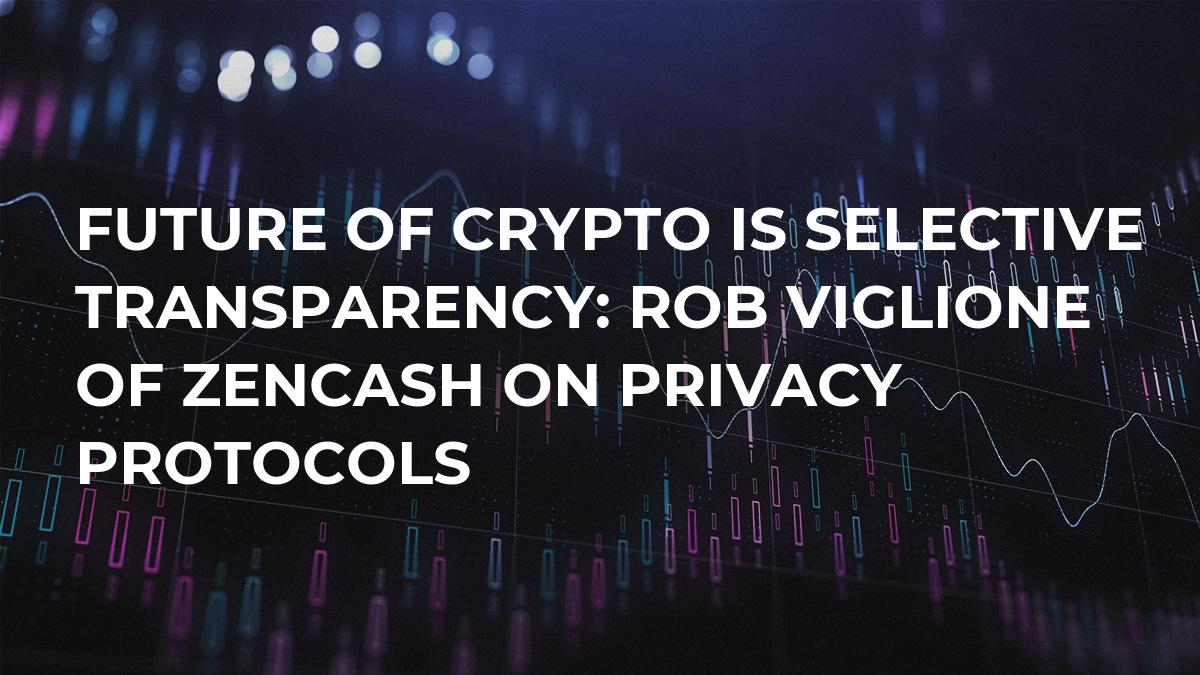 In the past few months, the news on cryptocurrency regulation has brought uncertainty and skepticism to the cryptocurrency market. The reality of impending regulation runs contradictory to the principles of decentralized cryptocurrencies, putting privacy focused coins in the spotlight.

However, privacy coins, even more so than Bitcoin itself, are perceived by many regulators and consumers as vehicles for facilitation of criminal activities. CryptoComes spoke to Rob Viglione, co-founder of ZenCash, for a more nuanced look at what privacy coins are today and what they could become in the future.

Katya Michaels: What makes a privacy focused coin different from “regular coins”? Are transactions handled in a different way?

Rob Viglione: One issue with Bitcoin that we started realizing early on was that it’s really not that private. All of the transactions are linked, which is the whole point of the Blockchain, and everything is public in the ledger where anyone can look at it.

As soon as you link one transaction to an identity, you can backtrack the entire chain to figure out every single transaction. This is a big deal because there are a lot of people who just don't want what they're doing to be publicly broadcast to the world.

Initially, transactions were mixed to obfuscate who is doing what. Then, there was the realization that individual transactions could be adapted for mixing, and also that mixing could be done at the protocol level. We could mix every transaction that ever, ever happened with other transactions.

Then, this other class of cryptography evolved, called zero-knowledge cryptography. This transformed the entire aspect of the transaction, so you can't even see who is sending money, to whom or for what amount.

What we are doing at ZenCash now is not just currency transactions, but an encrypted chat protocol where you can’t see any aspect of the communication. That’s a bit of the evolution of where we've come as an industry and where we are right now.

KM: There are other coins, ZCash specifically, that use the zk-SNARKS protocol. But you feel there is a way to build on and improve that technology for increased privacy and safety?

RV: I think that what ZCash did with zero-knowledge cryptography and zk-SNARKs is groundbreaking, so that technology itself is probably sufficient for most privacy use cases. What we are doing is building not just a cryptocurrency, but an entire platform based on zk-SNARKs technology.

So, basically, if you go to “https” on the web, you are creating a secure communication tunnel. We've done the same thing on our protocols with secure nodes - you can have a secure tunnel between the client and the node, or node to node, creating a secure encrypted network over which zk-SNARKs transactions occur. Our goal is a privacy oriented ecosystem, and this is just the infrastructure that runs the ecosystem.

Race for the TCP/IP of crypto

KM: On that subject, what do you think are the major components of crypto infrastructure that are defining the industry now and for the next few years?

RV: What might be different today versus the 1990s when TCP/IP started proliferating, is that we are actually starting to build standards that can make interoperability a reality. For instance, our R&D partner IOHK is actually building out an interoperability standard that cryptocurrencies like ourselves could adopt and use to speak to other protocols.

Right now it's a race to see who is going to be the TCP/IP of the cryptocurrency and Blockchain world, who is going to have this standard on top of which others are going to build a whole bunch of useful services.

Now, you don't have to have one protocol to rule them all, like The Lord of the Rings. What we should be doing is building out the infrastructure which could be interoperable with protocols that have different functions and niches.

Ultimately, what we want to do is to build some sort of mesh net or network of interconnected of services that do different things, but in aggregate can do a lot more together.

KM: Would you say that these kind of projects that are building the infrastructure to support Blockchains in the future are the best options for investment because they will have more longevity?

RV: There are two ways to look at it - either you are buying into an infrastructure play or you are investing into some company building some specific product. I personally gravitate toward the infrastructure plays because the ecosystem itself is much more valuable than any particular project. Of course, you can always find an amazing project that you can invest in directly. But there are more idiosyncratic factors when you do something like that.

KM: Interestingly, both the transparency of the public ledger and the privacy of use have been praised as qualities of cryptocurrency that will revolutionize the financial industry. But those two qualities seem contradictory - or can they be reconciled?

RV: That's a really good question. The way that we look at it, we give the user the option. We have a system where an individual has a choice whether to make the transaction either transparent or private.

There is a whole class of privacy coins that are based on using ring signatures, like Monero, that force every single transaction to be private. When you do that, you're doing a great job of security and privacy, but you bump up against use cases in the real world where a lot of businesses are accountable to shareholders or to the government for taxes and a lot of things that we do on a day to day basis actually have to be transparent.

That’s why I think that when we talk about this technology going mainstream, we have to have the option to be selectively transparent.

KM: It seems that the trajectory of the U.S. government on regulations and tax regimes is encouraging investors and consumers to turn their attention to privacy focused coins. Do you think that’s a justified reaction?

RV: If you're looking at this from the perspective of a trader, I think you're absolutely right - in the near term there will probably be a shift in the market towards privacy coins.

From a technology perspective, in the long run probably all coins will be privacy coins. Even Ethereum is looking to integrate zk-SNARKs into their protocol. There is a huge need for privacy, a huge set of economic and social justifications for why individuals should have some data that is just private, period.

Sure, there will probably be some projects that don't offer you privacy because they're catering specifically to a government or a bank, but overall I think the option of privacy will be ubiquitous across the industry. That’s the real sweet spot - when you have a technology that gives you the option of selective transparency and control over your own data.

KM: In other news, the Coincheck exchange stopped support for Monero, Dash and ZCash. Do you think this is a reasonable decision? In general, what do you think about privacy coins being associated with illegal activities?

RV: Technology will always be available for criminals - I mean, cell phone technology has done wonders for crime. But there is also a massive socio-economic impact that comes with it.

I think the same thing is true of privacy coins. The initial backlash is a little bit overdone, and I don't think ZCash can be put in the same category as Monero. It doesn’t make sense for exchanges to ban zero knowledge cryptography coins like ours, because only transparent transactions are listed on the exchange. In that context we are no different than Bitcoin.

KM: Perhaps few people take the time or have the background to distinguish between different privacy coins. In general, the industry is always evolving, and technical aspects may not be fully examined before making regulatory decisions. Could that be part of the problem?

RV: Yes, I think it’s the lack of education. My background is in science, and I think a lot of the time people do a good job on the engineering side, but there is a huge gap in the industry in terms of stepping back and bringing actual scientists into the market to think about the deeper problems.

It’s one of the jobs that I see ahead for myself - to educate the general population. We are not drug dealers, we are not criminals, we just think that technology has a lot more potential for social good than for bad applications by bad people.

Instead of pursuing technologists that want to build something that could bring social benefit, law enforcement should focus on the criminals who might take advantage of those innovations.

Bringing back the cypherpunks spirit

KM: You mentioned in some of your talks that you want to carry forward the spirit of the original cypherpunks. How do you define that spirit for yourself and how do you think the crypto industry is departing from those principles?

RV: In the spirit of full transparency, I'm not old enough to be an original cypherpunk. I was a late generation cypherpunk. Really, it’s just that cryptocurrency came about when people realized we could use technology for social good, to empower the individual, saying individuals have a right to privacy. That's the core of what we do.

What I like to say is we are standing on the shoulders of giants. The biggest giant was Satoshi, who gave us an amazing technology for free. I think now we have an obligation to give back socially to the community and the ecosystem.

But we want to preserve the fundamental attributes where we're first and foremost a values based, community driven project.  Doing social good is probably the most important thing, and if we can create some economic value in the process, that's awesome.