Valeria Blokhina
Take a closer look at the world of crypto with U.Today’s daily news digest! 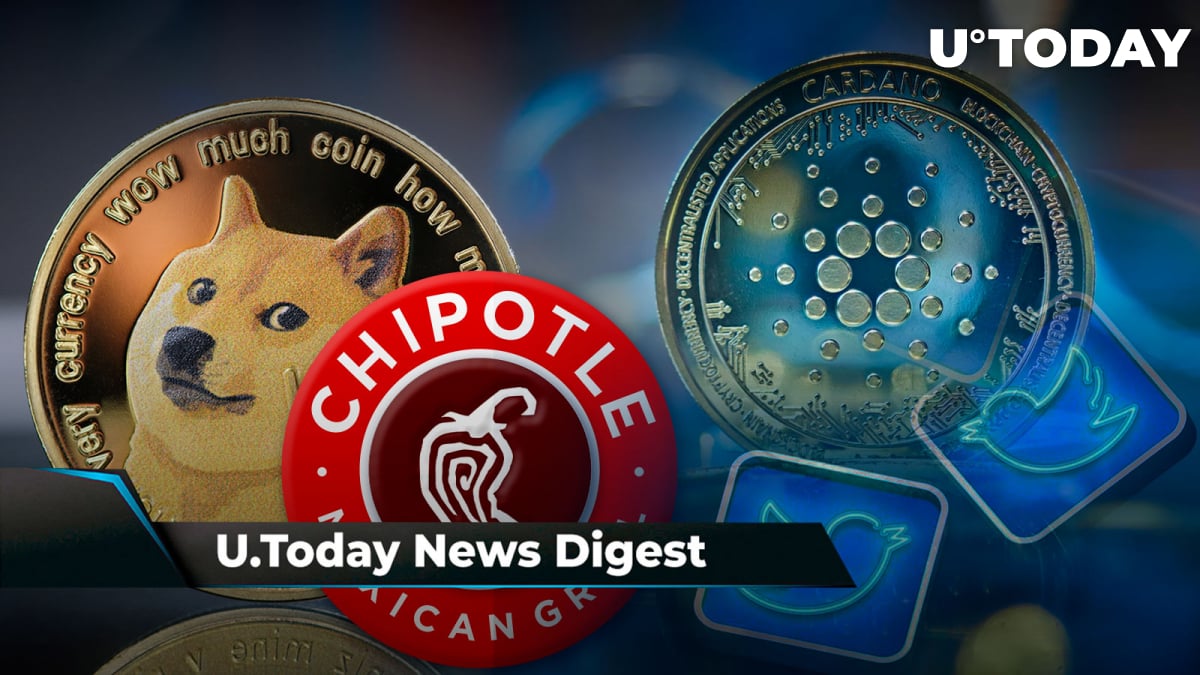 Chipotle, American chain of fast-casual restaurants, found itself in the spotlight after posting a picture with a giant dog of the Shiba Inu breed on top of one of its restaurants. The picture appeared to be to the liking of the Dogecoin community, with plenty of DOGE supporters leaving comments under the picture and even calling the restaurant chain “Dogepotle.” The post may be attributed to a recent giveaway announcement made by the company; as reported by U.Today, fans of the meme coin can win up to $3,000 in their favorite cryptocurrencies until Saturday. On Sunday, the size of the prize will be significantly increased, with $11,250 worth of DOGE up for grabs.

Data provided by The TIE, a leading provider of informational services, shows that despite the upcoming Vasil hard fork, Cardano has seen a major drop in social media activity. Specifically, its popularity on Twitter has recently reached a six-month low, which has also coincided with a sharp decline in trading volumes. However, the ADA price managed to benefit from the long-awaited upgrade, rising roughly 10% on the news over the past week alone. Despite losing its luster on social media, Cardano continues to see strong developer activity. As reported by U.Today, there are now more than 1,000 actively developed projects on the network.

According to a Twitter post by James K. Filan, Judge Torres has denied the SEC’s motion to revoke the amici status of XRP holders. It is worth noting that, according to the ruling, the court will not benefit from movants’ assistance in evaluating the qualifications of experts picked by the regulatory agency. Back in October, John E. Deaton and other movants were allowed to act as friends of the court, but their attempt to insert themselves into the case as third-party defendants was rejected. As reported by U.Today, the SEC asked the court to revoke XRP holders’ amici status last week after Deaton took aim at Patrick B. Doody, the SEC’s expert whose report detailed what information the XRP holders relied on before buying the token.

XRP network just had largest amount of unique addresses interacting on it in 2.5 years

The XRP network has added yet another anomaly to its list. Per Santiment’s on-chain analytics, on July 26, it witnessed an outstanding number of unique addresses interacting on the network. With 243,000 addresses, the XRP network broke the 2.5-year record set back in February 2020. Santiment also noted that the spike in activity occurred within a short period of four hours. This increase in activity, however, does not correlate with the price of XRP but rather occurred against a background of falling prices in recent days. Last Friday, the market also saw an enormous surge in XRP trading volumes. In the last hours of the day, the figure reached 18.6 million XRP, which is about 1,200% more than the standard figure.