George Shnurenko
Bears have full control over the reviewed cryptocurrencies as Bitcoin, Litecoin, Monero and Neo continue to fall 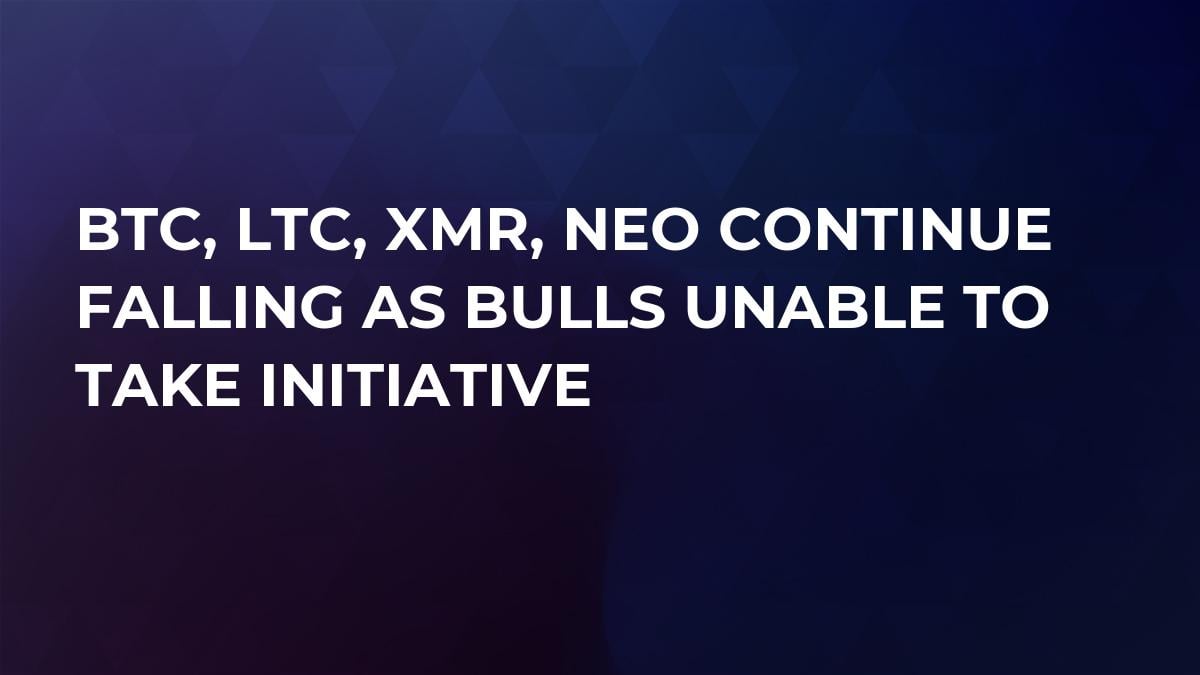 Pessimistic moods still prevail despite the positive start of the week for Bitcoin, Litecoin and NEO. BTC/USD, LTC/USD, XMR/USD and NEO/USD have a high correlation with each other and traders can use it today when placing orders.

Bears have full control over the reviewed cryptocurrencies as Bitcoin, Litecoin, Monero and NEO continue to fall, breaking through new levels. All coins follow their downside scenarios as they are still under their downside trend lines. However, there are first signs of corrections, that may happen in the nearest future.

The currency pair continues to go downwards as the bulls were unable to take initiative in their hands. Bitcoin price tested the resistance line (9,200 area) during the American session and jumped off as we have a strong candlestick Shooting Star fakey signal (the tail of the Shooting Star was above the resistance line for a while, but then the price moved below this level).

The next support line lies within the 9,000 area. BTC price has already reached it and tries to break it through aiming at the next support area (8,900 level). This 9,000 area support holds the price and we think it will be able to provoke a correction at least. However, if bulls are unable to stop BTC/USD here, the currency pair will likely to fall further, until the 8,900 area support line.

Taking a look at the picture generally, we can state that the downside trend line is still in place and the downtrend develops as bulls still have not enough power and volumes to change the situation.

The currency pair develops its downtrend and LTC price unable to reach the downside trend line. We have noticed yesterday that LTC/USD fluctuated close to the 160.00 area, but during the Asian session, the situation has changed a lot as bears regain momentum and drive the currency pair lower.

If we look at the chart thoroughly, we can see two Shooting Star candlesticks close to the 160.00 area, which were signals for bears to resume the downtrend. Litecoin price is far below the Ichimoku cloud. The next local support lies close to the 147.00 area. We think that LTC/USD is likely to reach this level in a couple of hours.

There are two scenarios then. LTC/USD is either able to reverse there and to start a correction at least or to break out this line and to resume its downside tendency. We recommend looking for candlestick signals close to the 147.00 area.

The upside midterm trend line on the daily chart was unable to prevent bears from driving LTC/USD downwards. LTC price continues to fluctuate within the Ichimoku cloud and is able to reach the lower border of the formation within a couple of days. If it happens, LTC/USD is likely to either develop its downside tendency until the next support line, which lies within the 120.00 area or to reverse form the lower border of the Ichimoku cloud aiming at its upper side.

The currency pair still goes downwards and has crossed another support line within the 219 area aiming at the next support, which lies close to the 214 area. Bulls are still unable to take the initiative in their hands as Monero price is far below the downside trend line, which started its formation in the first days of May 2018.

XMR/USD is also below the Ichimoku cloud. XMR price tested it yesterday but failed even to go inside the formation as it jumped off. We think that the next battle between bulls and bears will take place close to the 214 area. We recommend looking for candlestick signals there as XMR price is likely either to reject the support line or to break through it.

Monero still follows the downtrend on the Daily chart as the price is below the downside trend line. It was rejected in the end of April and is still in place. XMR/USD fluctuates within the Ichimoku Cloud aiming at its lower border. If bears continue to press the currency pair, Monero will be able to reach the lower side of the Ichimoku cloud within several days. There Monero price will be able either to reverse upwards and to aim at the downside trend line or to resume its downtrend until the 172 area.

In general, we still have bears scenario as the Monero price is below the midterm downside trend line aiming at local lows.

The currency pair follows the others cryptocurrencies and develops its downside tendency. NEO price almost reached the 72 support line area. NEO/USD rejected the downside trend line during the Asian session confirming the power of bears and that they are still in control of the situation.

NEO price is far below the Ichimoku cloud and this is another sign of bulls’ weakness. There are two scenarios as usual– NEO/USD is likely to reject this 72 area and to reverse upwards. Another way for the currency pair is to develop its downside tendency until the next support line. We recommend looking for candlestick patterns as they may give alerts about a correction at least.

If we take a look at the daily chart, we can see that NEO has recently had broken through the downside trend line but almost returned to it yesterday to test. In case of bears successfully break it out, midterm downtrend will come into force again. NEO price will able to reach the lower side of the Ichimoku cloud and to test it.

However, there is another scenario where this downside trend line holds the test and NEO price reverses upwards. Bulls have a chance to change the situation in this case and NEO/USD will aim at the upper border of the Ichimoku cloud.