Vaido Veek
Bitcoin is above the current level of major resistances, Dash shows bullish signs, Ripple is a massive gainer 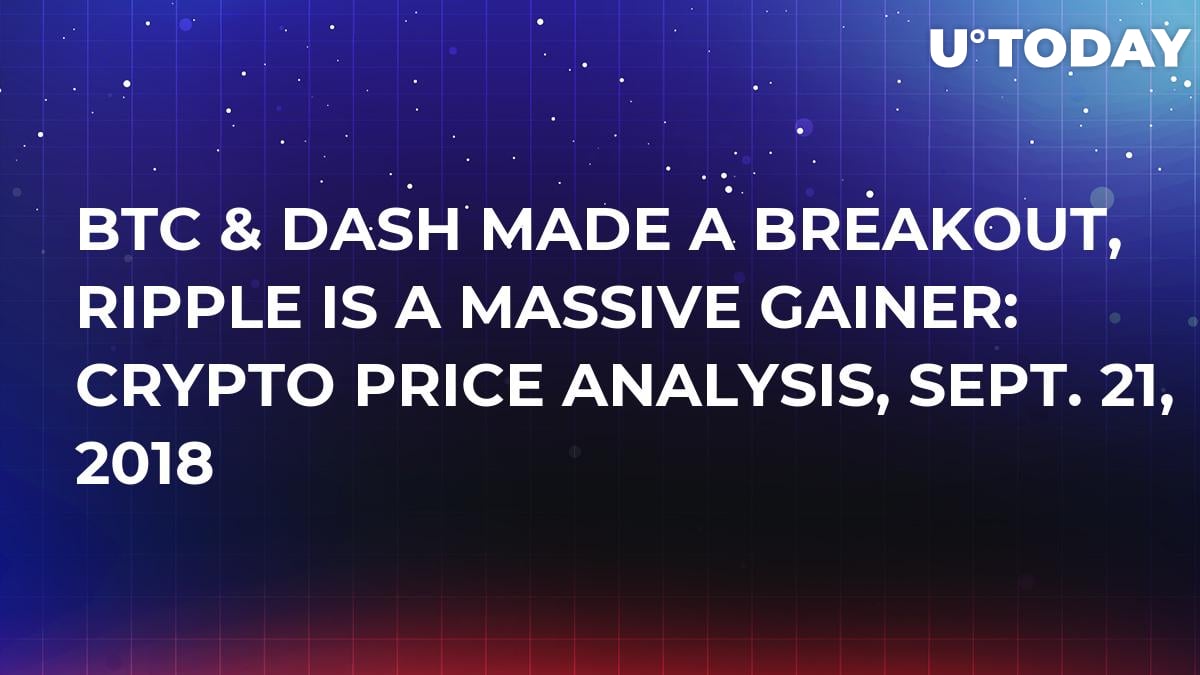 Bitcoin is above the current level major resistances

Yesterday, we mentioned exactly a bullish confirmation area which was above the triangle upper trendline and above 100 EMA. The four-hour candle closed pretty precisely above those and as we mentioned, this shake off that happened the day before yesterday would give us a better accuracy on the confirmation areas from the technical perspective. 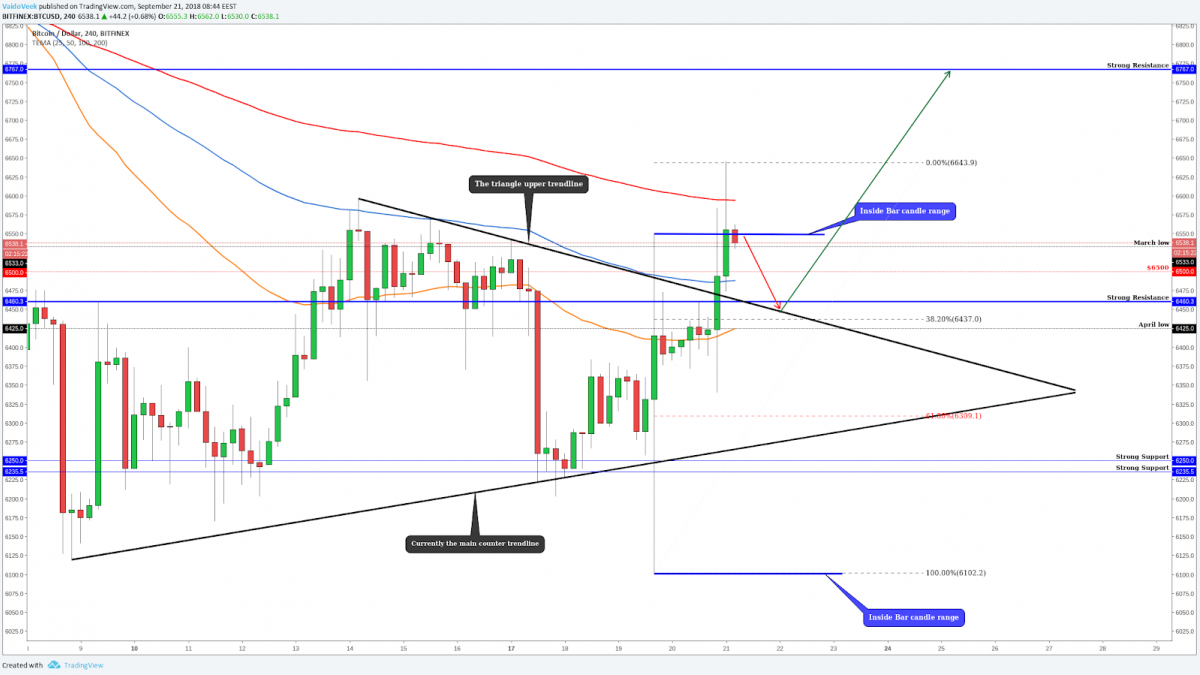 After the close, we got another bullish four-hour candle which closed above all our named resistances. Now, those resistances become the support levels, starting from the March low until the April low.

Currently, after the pump upwards, Bitcoin finds a resistance from 200 EMA but we have a good sign from the candlestick pattern called "Inside bar,” it means that if we break above or below from the main candle range it will show us current momentum. So, this massive candle and those candles afterwards created us "Inside bar(s)" and we did a breakout upwards (you can see the blue lines mark those places on the chart) which will indicate that the momentum could be upwards.

Now, when we have a little throwback from 200 EMA we could retest the lower levels. All throwbacks are healthy if we manage to stay above the triangle upper trendline which now also  becomes a support level. The lowest point where we want to see another movement upwards is around $6,460. The bounce criteria from retest area:

1. There is the strong support level (blue line)

All those criteria make a crossing area and start to work as strong support levels.

Obviously, there is room to reach higher levels. We want to name the first area where the price could stay in consolidation mode or could make a little throwback, it is around $6,766. There is another strong resistance level, the bigger Fibonacci 50 percent retracement zone and a trendline projection.

Dash made a bullish breakout 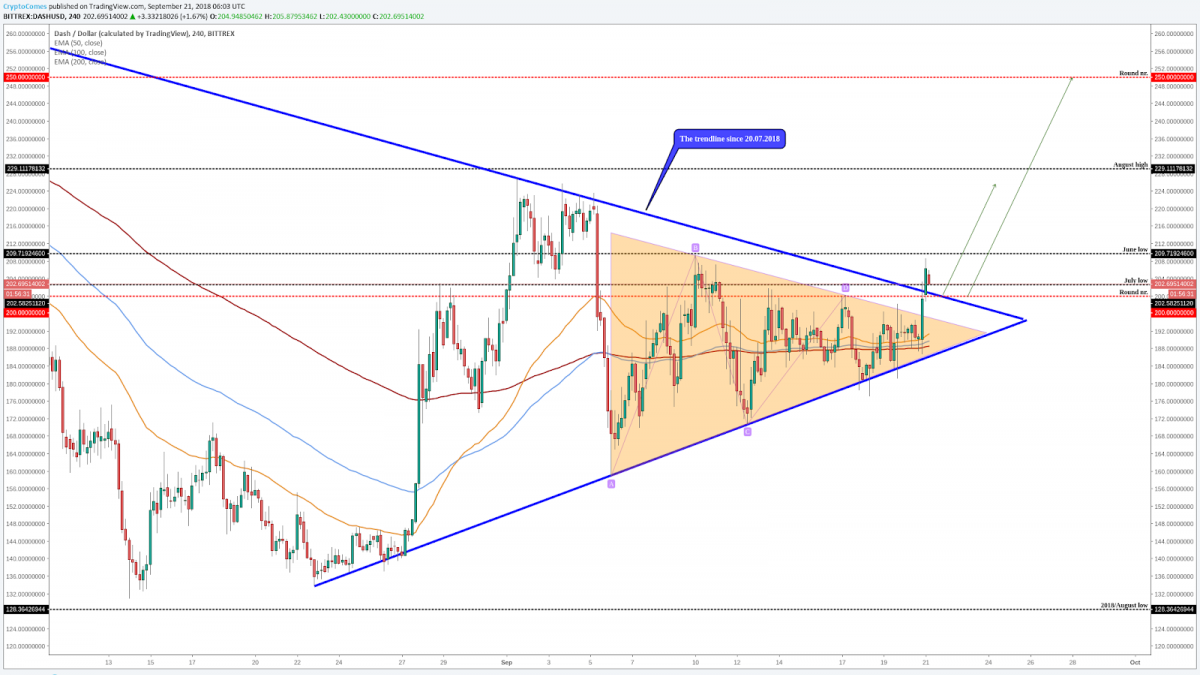 We have mentioned before how strong it looks and etc. Currently, as we said, it has two bullish signs but let's count all the bullish signs together, we have:

1. Upwards breakouts from the triangles

3. Currently, we are sitting on the July low level which starts to work as a support because we broke above that level too

So, those criteria will guide us to higher levels and the target areas could be around:

* Currently, the main target would be around $250- semi-round number, the triangle pattern possible target, Fibonacci extensions.

Technically, Dash is very bullish, multiple bullish price action criteria matching each other means it is ready to climb into the main target area.

After we mentioned our Ripple (XRP/USD) trading idea on our TradingView account (https://www.tradingview.com/u/CryptoComes/- also hit the follow button to get our ideas instantly), it has peaked just a little bit over the 70 percent. It is just unbelievable how fast Ripple gained its value! 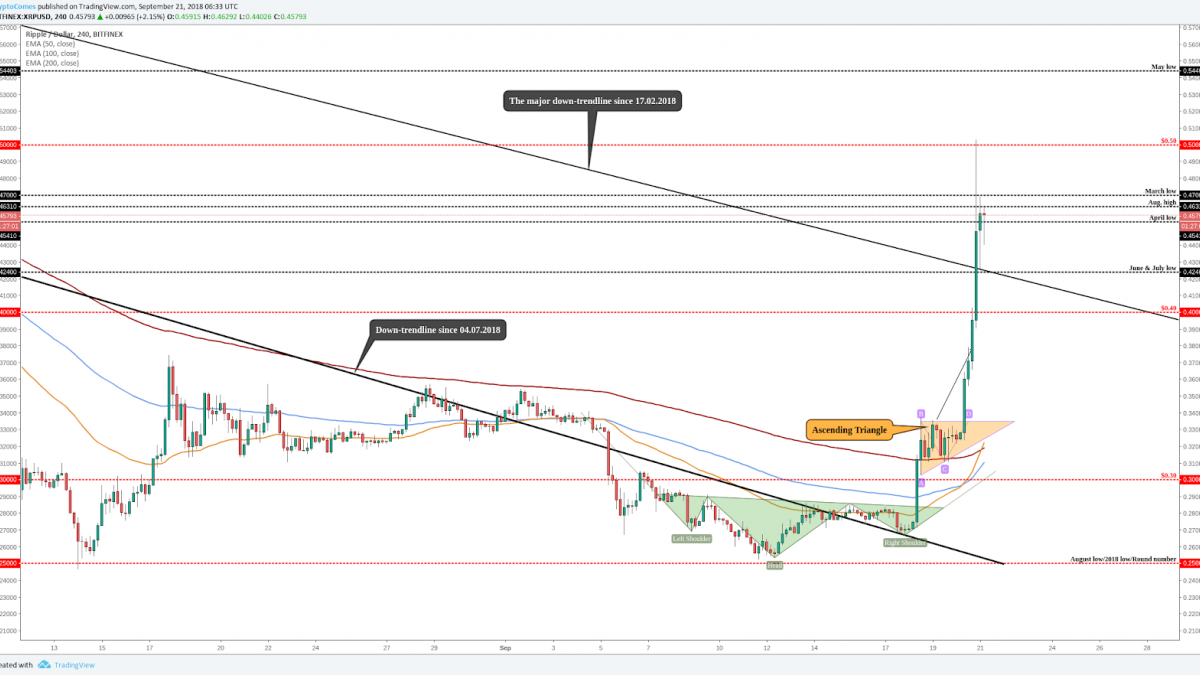 Firstly, our main target was around $0.4 but the price made just a little stop there and skyrocketed to the higher prices and it reached even $0.5.

The road started from the "Inverted Head & Shoulders" pattern, a little stop around $0.32 and we had a breakout from the bullish pattern called the "Ascending Triangle.” Currently, we trade above the major down-trendline which is pulled from Feb. 17, 2018. Just two days ago it seemed like a dream to reach there because the gap between the major trendline and the current price was almost at a record low versus other altcoins (some alts trade above the major down-trendline and some trade close to it).

Currently, we have reached into the very strong area which has been a historical support level as well as a resistance level. Let's say, the area between the $0.45-$0.47 is a strong resistance level.

Definitely, whoever sees this wants to jump into the wave but please don't do this false move, please do not FOMO (fear of missing out). Yes, maybe it could go higher but make sure to find some technically good places where you can buy into the coins. NEVER buy in, especially, when the coin had a 70 percent gain. You have to search for technically good spots where you can jump into the wave, some breakout from the bullish pattern (like you see on from the picture, Ascending Triangle after the first leg upwards), and possible retest area (currently, the good retest area would be around $0.4 or around the major down-trendline retest area). If you buy it right now you may be stuck with XRP and be a “bag-holder” but at the same time, you will see how technically good setups make hard profits.