Yuri Molchan
One of the world’s biggest crypto exchanges announces the opening of a Weibo account, thus making its way to the Chinese crypto community 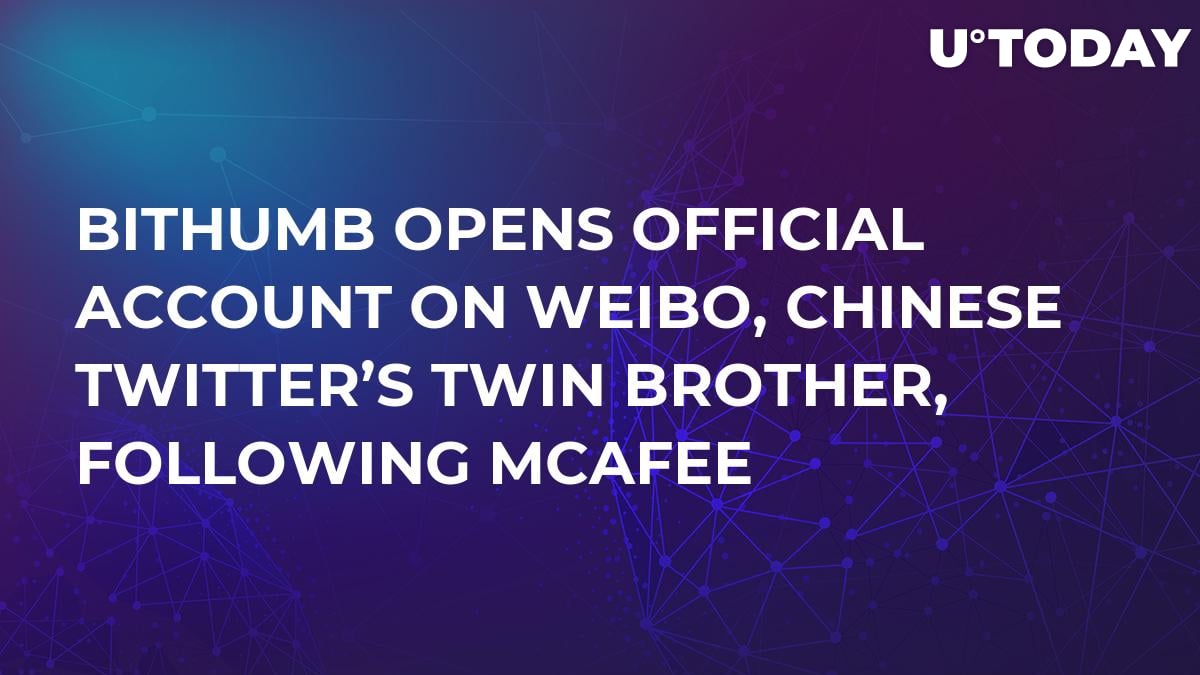 On Friday, December 14, through its official Twitter account, the Bithumb trading platform announced that it has set up an account on the Chinese analogue of Twitter – Weibo, one of China’s largest and most popular social media platforms.

We are happy to announce that our official #weibo account is opened!
Now you can check our new promotion, notice and special information about cryptocurrency and block chain at weibo too! ??

With this move, the Korean exchange is trying to expand its Chinese audience, despite the ban that has been imposed by the Chinese government onto local crypto exchanges, ICO makers and crypto mining, making many industry representatives go elsewhere in search of a peaceful place to work.

Since the majority of the crypto community is now located on Twitter and Telegram, presence on these two social media platforms is very important. This was realized by John McAfee, when earlier this year U.Today reported that the notorious ‘crypto baron’ and former anti-virus creator also opened an account on Weibo in order to have access to the Chinese crypto community.

Was there a Chinese ban at all?

Everyone in the global crypto community has been speaking of the authoritarian Chinese government since September 2017, when it laid a prohibition on ICO makers. Later, it forbade crypto exchanges and even began suppressing miners. Recently, Chinese authorities started shutting down illegal mining farms as well.

What is more, this autumn Chinese government began to prohibit public events that promoted ICOs and began to shut down all major accounts on WeChat, a popular Chinese messenger run by the Tencent giant.

However, recent research conducted by AuroraChain claims that despite the struggle that the government of the Celestial Empire put up against the decentralized crypto industry, it has had a much weaker effect on the local community than was expected.

The research shows that the amount of users of crypto wallets and dApps has been gradually increasing.

In addition, earlier this fall, U.Today reported that Tron was teaming up with the Chinese Alibaba online retailer to help the latter, reportedly, create a crypto exchange, despite the overall Chinese crypto ban. Apparently, such a behemoth would not even think of undertaking this without definite knowledge that this would be allowed one way or another.