Bitcoin Price Prediction [Updated]: Bill Gates and Joe Davis Say It’ll Be $0. How Is That Possible?

Vera Yurina
Not all IT experts share an optimistic view of Bitcoin’s future. Read about BTC price predictions from Bill Gates and Joe Davis 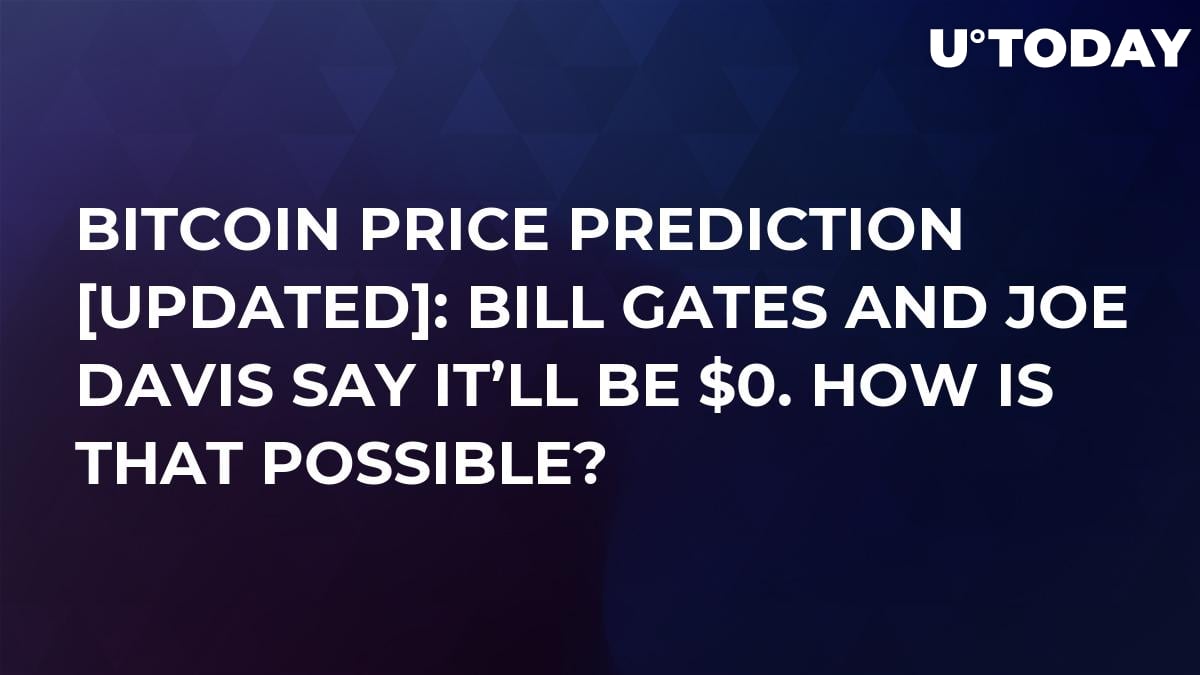 Despite the bearish market and constant price fluctuations, Bitcoin continues solidifying its status as the world’s leading cryptocurrency, so investors continue flowing in. Want to join their rows? Don’t hurry: you should monitor BTC price predictions first – some tech giants are quite pessimistic about Bitcoin’s future.

What might contribute to Bitcoin’s failure and make the bubble explode?

Microsoft founder Bill Gates has never been fond of neither Bitcoin nor cryptocurrency in general. Here’s what he says:

“As an asset class, you’re not producing anything and so you shouldn’t expect it to go up. It’s kind of a pure ‘greater fool theory’ type of investment… I agree I would short it if there was an easy way to do it.”

The crypto community still remembers his sneering at having received some Bitcoins as a birthday present. Why is he so skeptical about the cryptocurrency? Gates explained that the main reason for his negative forecast is that he doesn’t see digital tokens as having any intrinsic value.

Gates declined to specify any certain timelines to his prediction, but he stays reassured that the Bitcoin market is to explode sooner or later. Despite that, the Bitcoin paper market is steadily evolving, so it will probably take years for BTC to crash.

The leading economist from Vanguard’s investment strategy group reckons that Bitcoin’s price performs the function of speculation only. He says Bitcoin is a poor store of value – it’s too volatile. He recommends people investing in something more tried-and-tested. His conservatism in the investment sphere can be understood. Yet, some other institutions, such as Goldman Sachs, encourage investors to explore Bitcoin’s potential.

Kenneth Rogoff: Bitcoin to shrink to $100

Another pessimistic prediction was given by Harvard Prof & ex IMF chief Kenneth Rogoff. He is widely known for hatred towards Bitcoin, and this time, he acted in the same manner:

What is his forecast based on? He is sure that governments will rise against cryptocurrencies like Bitcoin. According to Rogoff, laws and regulations will trigger the explosion of the Bitcoin bubble. Besides, crypto enthusiasts and Wall Street experts have very different mind frames.

Why else can Bitcoin fail?

Apparently, bitcoin is not ripe enough, respectable enough, or regulated enough to be worthy of our markets. I dissent: https://t.co/gH5zXaKtmj

Only time will show whether pessimistic assumptions will materialize, but it doesn’t seem that Bitcoin is going to leave the scene in 2019. The show must go on!