David Dinkins
Bitcoin’s latest price increases have been enormous, but they may not be enough to reverse its downtrend. 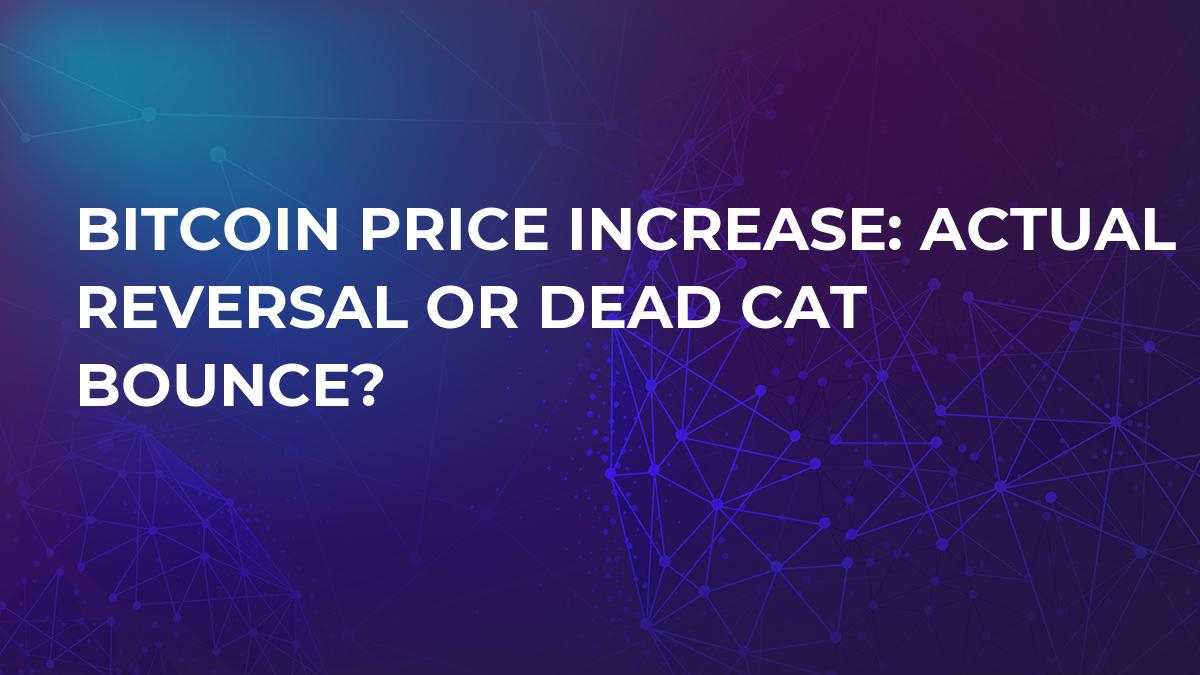 While Bitcoin price has come roaring back since hitting a low of $5,800 late Monday night, it’s still way down from December’s high of $20,000. Bitcoin bulls are hoping that the jump from recent lows to today’s high of $8,600 is indicative of a true reversal, but bears aren’t so sure. Bitcoin’s stunning 48 percent jump may not be enough to end the downtrend.

During a falling market, there are two types of bounces. What the bulls hope for, of course, is a reversal of the trend. On the other hand, bears point out that during a prolonged downturn, it’s natural for the price to sometimes move up before continuing down. Such a movement is called a “dead cat bounce” (DCB).

The markets tend to refuse to move in a straight line for very long periods of time. A prolonged downtrend will almost certainly result in a few days of bullish price activity. The term “dead cat bounce” gets its name from the saying that even a dead cat, if dropped from high enough, will bounce when it hits the ground. Inevitably, at some point, those who have shorted an asset will close their shorts and lock in a profit. In order to do that, they must buy some of the asset that they shorted.

Someone who shorted Bitcoin at $10,000, seeing a drop to $6,000, might say “that’s enough” and decide to realize his profits. He does that by buying at $6,000 the same amount of Bitcoin he sold at $10,000. If several people do this at the same time, others may take notice of the uptick in price and start closing their shorts as well, before the price rises too high and eats up their profit. Hopeful bulls, seeing the price move upwards again, may begin to pile on, buying more Bitcoin for fear of missing out. The combination of shorts closing and bulls buying is enough to move the price up, sometimes quite significantly.

Unfortunately, when shorters are done covering and buyers run out of steam, the market drops once again. The downtrend continues, with the next drop being even deeper.

A reversal is a powerful series of moves that actually erases the previous trend and establishes a new one. In a downtrend, reversals usually show up on the chart as either a double bottom or an inverse head and shoulders.

With a double bottom, you see the price hit a low, rise pretty high, fall again and touch the same low, then go back up. For example, Bitcoin dropped to $5,800 on Monday. If it were to go up to $12,000 over the coming days or weeks, then drop back to $5,800, and then go up past $12,000, you’d have a double bottom. A critical support level, in this case $5,800, will have been tested twice and confirmed to have held. Double bottoms look like a capital letter “W.”

An inverse head and shoulders is similar, in which the price hits a low, goes back up, drops even further to establish a new low, rises again, then drops. However, the last drop is not as far as the second one, which implies that the bottom has been hit and that sellers have run out of steam.

Whether Bitcoin is doing a dead cat bounce or in the early stages of a reversal is anybody’s guess. However, there’s one good piece of advice that will serve you well when contemplating on the right time to sell. Whenever the price has dropped by double-digit percentages and you’re terrified, it’s usually a good idea to wait. Odds are, even if the price drops further, a future dead cat bounce will enable you to sell at a higher price than you were contemplating.

When Bitcoin was at $6,500 Monday night, you might have been pretty nervous and thought about selling. If you had waited a bit, sure enough, you’d have watched the price tumble to $5,800 and would have grown even more fearful. But if you held on a while longer, you would have gotten a chance to sell in the $8,000s.