Bitcoin Price Drops to $7,240 as Bears Triumph; High Time for Buyers to Step In

Dmitry Cake
Bitcoin price drops to $7,240 as bears achieve their goal over the weekend. Can we please see a reversal now? 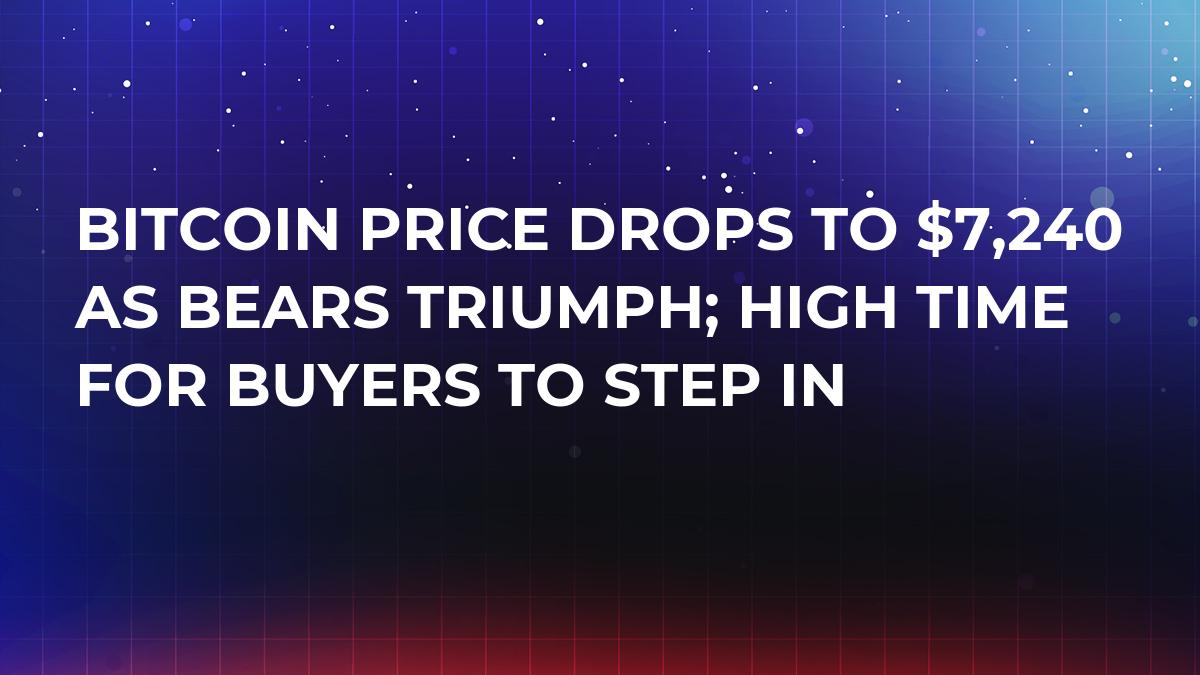 For any analyst, there is great interest in monitoring the impact of asset prices on the mood of investors (notably, in this causal direction, rather than vice versa). This past weekend, the market demonstrated how easily participants submit to panic and infect each other with negative emotions. Let's see if a positive outlook is just as easy to spread?

Since our last review, many events took place on the market, although a brief glance at the main indicators today and at the beginning of Friday may suggest that hardly anything has changed.

We wrote quite a bit about the bears’ goal, in great detail, all of last week. As we can see, it was fulfilled with a minimum error of $40. At the time of writing, Bitcoin is trading at the $8,200 mark, while the maximum was at $8480 — therefore, in just 6 hours the buyers gained back $1200 of the decline.

On Friday, we surmised that the fate of the cryptocurrency market will be decided at the G20 summit, where market regulation was one of the topics on the agenda. Again, we weren’t mistaken — the reason for such aggressive bull behavior was the statement by the head of the Financial Stability Board, indicating that cryptocurrencies are not considered to be a threat to the global financial system.

The altcoins reacted to the restoration of Bitcoin price quite predictably. During the weekend, the price of some assets in the top 10 fell not only farther than Bitcoin (which is normal), but farther than expected. Therefore, after the first signs that the prolonged depression is nearing its end, we see significant growth for coins that lost the most value, and moderate growth for those that kept afloat.

It seems that at the $7,240 mark we saw the culmination of sales and the local minimum of the underlying asset’s price. The decline was stopped by the intersection of the 0.786 Fibonacci retracement and the boundary of the descending channel. The shape of the hourly candle with a long lower shadow also confirms that the target was reached and indicates where buyers entered the game.

Further, they had to break the descending trend from March 16, indicated on the chart with in orange, after which event the market received the signal about the reversal of the trend.

Despite the extreme exhaustion of the bulls, who spent all last week resisting attacks on the price of the main asset, the four hour chart shows a long green candle with short shadows — a sure sign of changing mood in the market. Purchase volumes are also worthy of attention — we haven’t seen such values since February 6. After reaching the mirror level $8,480, the price corrected to the 0.618 value of the Fibonacci grid, where we will continue to see the confrontation between bulls and bears.

Though this may sound dramatic, the outcome of the battle will determine the further fate of the market. Buyers have to find a reliable foothold above the $8,200 level, in order to storm the upper boundary of the global descending channel. If successful, the next growth target is the $8,750-$8,900 zone.

It’s dangerous to stay at the 0.618 Fibonacci value for too long — the market still has a lot of doubt and uncertainty. If the bulls don’t have enough strength to continue growth, investors will start booking even small profits (though for the majority, just a reduction in losses), which could lead to another drop to the level of $7,800-$8,000. To readers who haven’t made purchases near the decline targets that we indicated, we recommend waiting for the final confirmation of the trend change.

While the behavior of Bitcoin price was predictable enough, Ethereum gave us an unpleasant surprise — the minimum value was $450, which corresponds to the level at the end of November. What is permissible for altcoins outside of the top 10, is not permissible for an asset which is in second positions in terms of capitalization. Due to this fact, we must allow that the investment potential of Ethereum is somewhat reduced for the short term.

At the moment, the price is $530 and trying to return to the borders of the previous descending channel. If the reversal of the market trend is confirmed, this is sure to happen, and the next growth target will be the $625 level. The next target after that, according to the Fibonacci expansion, is $730, but before that the bulls will have to storm the upper boundary of the descending channel, which can be a challenge. So, in this situation, we are expecting a local maximum at the $700 level. For holders of long positions we recommend to partially close them as they reach the breakeven point (depending on the price at purchase).