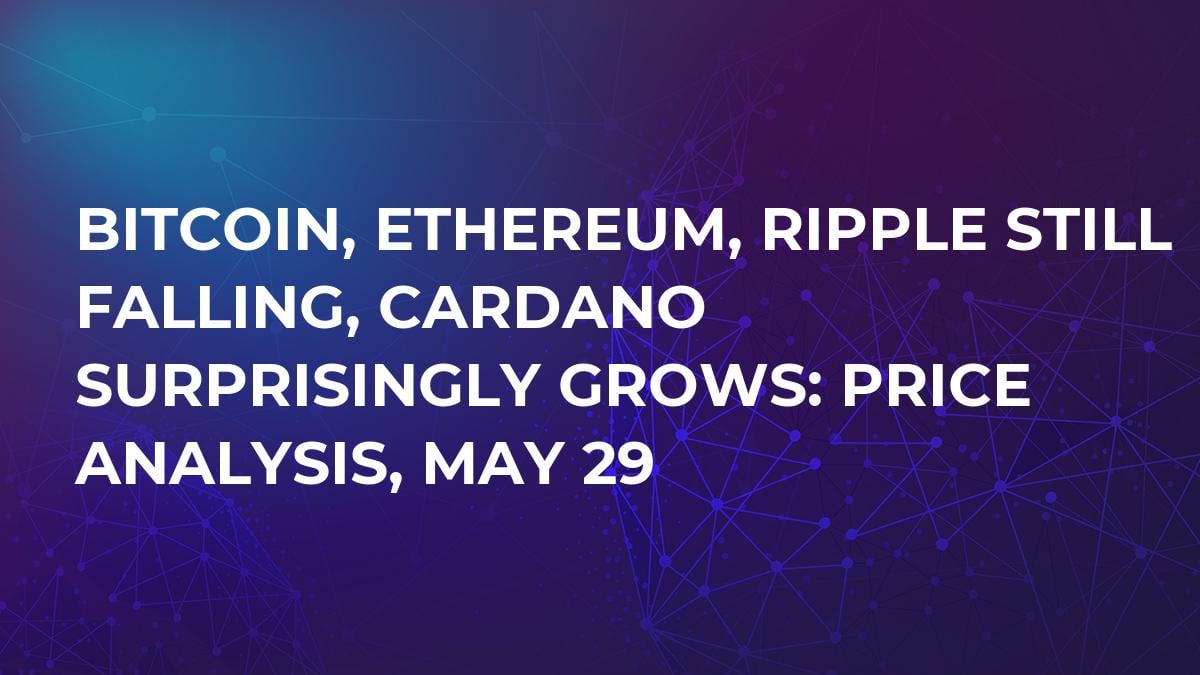 There is two news today– both bad and good. The bad one is that Bitcoin, Ethereum, Ripple are still going down without any sign of a reversal. The good one is that they have slowed down their downside tendencies. However, no one can say for how long.

Psychologically, the crypto industry is still bearish. There is no a single event to help bulls to break this negative tendency. Bears continue to dig themselves deeper into the ground, establishing new lows almost every day.

As for crypto news, there are some interesting events to mention. The South Korean Bithumb exchange has banned traders from 11 Non-Cooperative Countries and Territories including Iraq, Iran, Bosnia and Herzegovina, Tunisia, Trinidad and Tobago, Vanuatu, Yemen and others. The other interesting event for the cryptocurrency community is that six companies in Japan have opened crypto exchanges on the Tokyo Stock Exchange.

The fundamental outlook, however, is still negative. Hodlers and buyers are still waiting for some good news to come.

Bitcoin is still going along the red midterm descending trend line and shows no sign of recovery. The currency pair established new lows on Monday meaning sellers still have control over the market. BTC/USD seem to aim at $6,510 in midterm.

Let’s have a closer look at what is going on the hourly chart. BTC price has jumped below the $7,199 support area and is trading there currently. Bitcoin has chosen the red scenario (bearish) on Monday. BTC/USD slides down along the red midterm descending trend line.

Possible paths for Bitcoin are the following:

Ethereum has lost nearly two percent in the past 24 hours, meaning the currency pair slows down its downside tendency. There is a possibility of a bullish correction. However, ETH price still stays below the descending trend line and we have a general downside tendency. Midterm outlooks still negative. The price is able to reach $453.24 support area at least.

Let’s have a closer look at ETH/USD’s hourly chart situation. The currency pair has reached the support area at 3.618 retracement level and has fallen back from there. It seems that Ethereum goes towards the closest resistance area at $566.90, which coincides with 2.618 retracement level.
The possible scenarios for ETH/USD are the following:

Ripple has left the midterm descending trend line, but we have drawn another short-term one as the currency pair still follows a downside tendency. XRP/USD has lost over two percent in the past 24 hours. Ripple’s downtrend slows down, but it is still in place meaning bears control the market. Midterm outlook still negative. The currency pair is able to reach $0.5000.

Let’s have a closer look at the hourly chart situation. XRP/USD has reached new lows on Monday and touched $0.5444 support area. The currency pair jumps off this level later and crossed 2.618 retracement level as a part of the bullish correction. The possible scenarios for XRP/USD are the following:

The currency pair still follows the downtrend as it is close to descending trend line. EOS has lost over than two percent in the past 24 hours. This downside tendency seems to slow down but sellers are still in controlling the market. The next midterm target for the sellers lies at $10.00 area.

Let’s have a closer look at what is going on the Hourly chart in the short term. EOS price is between 0.382 and 0.5 retracement levels. EOS/USD has almost reached one retracement level on Monday, but jumped off it, starting an upside correction. The possible scenarios for EOS are the following:

The currency pair added more than eight percent in the past 24 hours, which is surprising as the other coins declined mostly. However, ADA/USD is still unable to make a complete reverse. This upside rush is nothing more than a bullish correction, which seems to come to an end in the nearest future. Midterm targets for bears lie at $0.1544.

Cardano has reached $0.1719 support area before starting a luminous bullish correction to $0.2002 resistance area. ADA/USD is currently close to this resistance. This correction is sharp, but we still think that bears will take control in the midterm. The possible scenarios for ADA/USD are the following: