What Does It Mean When Bad News of Hack Has No Effect on BTC Price?

Darryn Pollock
There was a time when any crypto exchange hack would see an instant drop in BTC price, but after the one in Canada, it has not even flinched 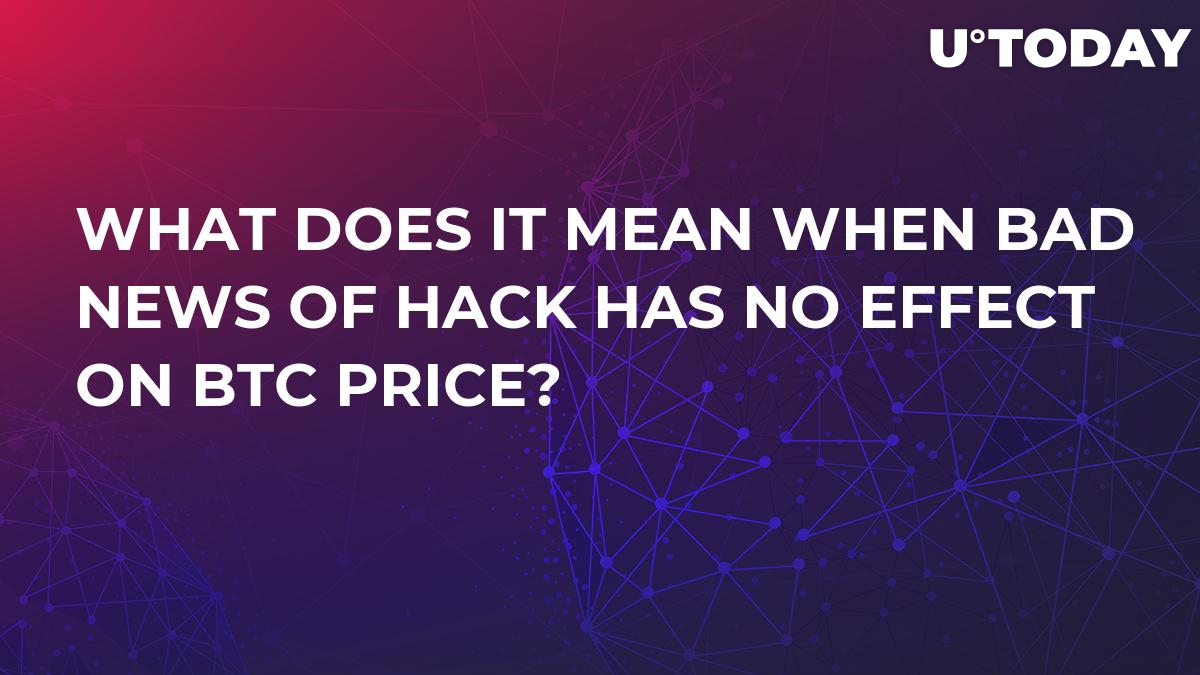 One of the biggest ever bear runs and a massive price dip in Bitcoin came after the infamous Mt. Gox hack in 2014. And ever since then, news of hacks and other exchange misgivings have often led to some sort of price dip, regardless of the size or scope of the infraction.

The Bitcoin price has now remained steady for over a week hovering between $6,400 and $6,500, and even despite more worries that the MapleChange hack was actually a devious exit-scam, the bad news is not having its usual effect.

So, while regulators and governments are trying to clean up the cryptocurrency ecosystem that was such a speculative market in the past, the news of hacks and scams not shaking it brings up interesting questions.

Recently, good news has not had enough power to get Bitcoin off its apparent floor, but now, even bad news is not strong enough to shake the stable price; what can this actually mean for Bitcoin?

A hack up North

The MapleChange hack has come with some confusion and speculation that it may well be a scam in order for those in charge to escape with the money they have acquired. So, while it is a smaller exchange and thus its effect from this loss of funds is minimal, it is more the ramifications of another hack that should be playing a role.

MapleChange said in a tweet that all funds had gone missing and thus they would not be paying back any of the stolen coins. This contrasts with a much bigger hack, the one of Coincheck, but they at least paid the money back.

The market dropped significantly after the Coincheck hack, and even with the promise of repaying the stolen funds, it struggled to make it up again. But in the case of MapleChange, the damage to the cryptocurrency spaces reputation is far worse despite the fact the loss of funds is smaller.

No movement, no care?

That is why it is so strange that the price of Bitcoin and the overall market has not moved even slightly at the news of this hack. Usually, investor confidence would take a knock and there would be a sell-off resulting in a slump in the price.

However, it could be that the speculators have all but entirely left the market and that these kinds of hacks have no damaging influence on the investors who remain. It would mean that the money remaining in crypto is probably here to stay regardless of what happens.

This could also be indicative of a true bottom. While Bitcoin has struggled to break out of a resistance of $6,800, it has also not fallen below $6,200 for a long time — or for a very long time. This bottom could also be playing a role in not forcing the price down after this bad news.

The face of Bitcoin investing has surely changed. The usual expectations are no longer there to be counted on, and the next move from the cryptocurrency is yet to be seen. It has always been hard to predict the way in which Bitcoin will move, but that is even truer today as it sits barely moving at all.