Darryn Pollock
There are big claims about Bitcoin being more stable than NASDAQ, DOW and S&P 500, but its Google searches are also way down — are they linked? 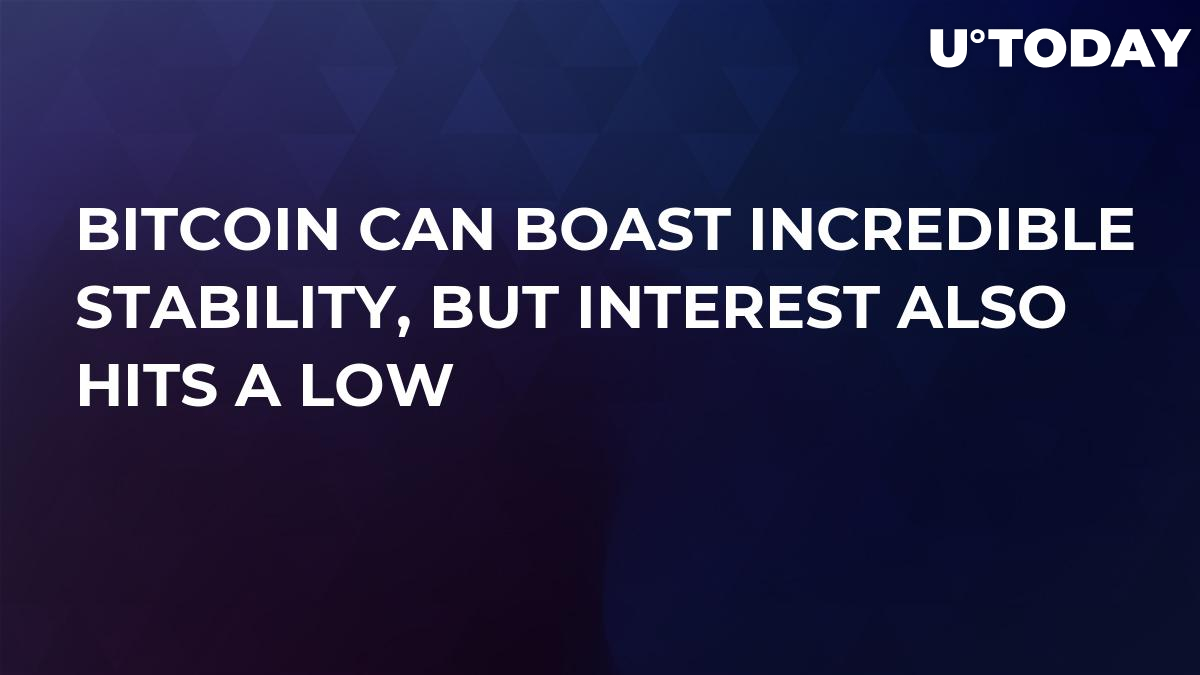 Those who have been in the cryptocurrency space for some time now would not flinch if the price of Bitcoin dropped by 40 percent — or even rose by that — in a day since they are accustomed to its wild volatility. However, that volatility has almost totally abated with the price of the major cryptocurrency barley shifting more than a $100.

Some are seeing this as a cause to celebrate since it shows that the once criticized asset on volatility has actually been more stable than NASDAQ, DOW and S&P 500 in the last month. However, a drop in interest has also come with this low volatility.

Google searches for Bitcoin have hit a low last seen in May 2017 which could be a cause for concern as it potentially points to a loss of interest in the cryptocurrency. There has also been evidence — in what has been labeled Satoshi Cycle — that as interest grows, so does the price of cryptocurrencies.

Is there a change that the two are actually related? The low Google searches indicating low interest can also be interpreted as a low desire to trade and have an active and energetic market.

Looking around at the usual steady and secure stock market, there has been some volatile movements which next to Bitcoin even look wild. The Dow plunged into negative territory for 2018 following Wednesday’s 600-point drop, and the Nasdaq Composite Index posted a 4.4 percent slide, the largest single-day loss since August 2011. Meanwhile, Bitcoin has posted a $40-spread within the past 24 hours.

Bitcoin has been less volatile than NASDAQ, DOW and S&P 500 over the past month. (H/t @taiberg)

A lot of this concern of the traditional markets has to do with fears over an impending financial crisis, which is a good news for Bitcoin in any respect and even more so in the light of seeing it so steady and trusting currently.

However, at the same time, the general interest in Bitcoin via its Google searches is at a massive low that stretched back to May 2017. So, while there is a worry about traditional stocks, there is no real correlation to investors looking towards now steady Bitcoin as an alternative.

Moreover, the loss of interest would also suggest that there is no real price rise on the horizon as almost every price spike has been accompanied by a spike in Google searches.

Google searches for "Bitcoin" lowest since May 2017 - down 93% since Dec ATH. pic.twitter.com/6wUqp2VHrm

Is there a link?

Low volatility, while mostly being seen as a positive, may not be that good if it is linked to a loss of interest from traders and investors who are needed to keep the market thriving. At first, it was the high volatility swings that added to the interest in the market and saw a rush of money into cryptocurrency.

However, if the next wave of adoption won’t be like the first one, then perhaps this is one way for institutionalized investors to see the cryptocurrency as an alternative should a financial crisis come. And, if that is the case, then the link between the two could well play in the cryptocurrencies greater favor.