Bitcoin Price Predictions: Who to Trust — Science or Experts

Darryn Pollock
Price prediction and market movement have become a staple of the cryptocurrency space, but how accurate is the science, and the experts? 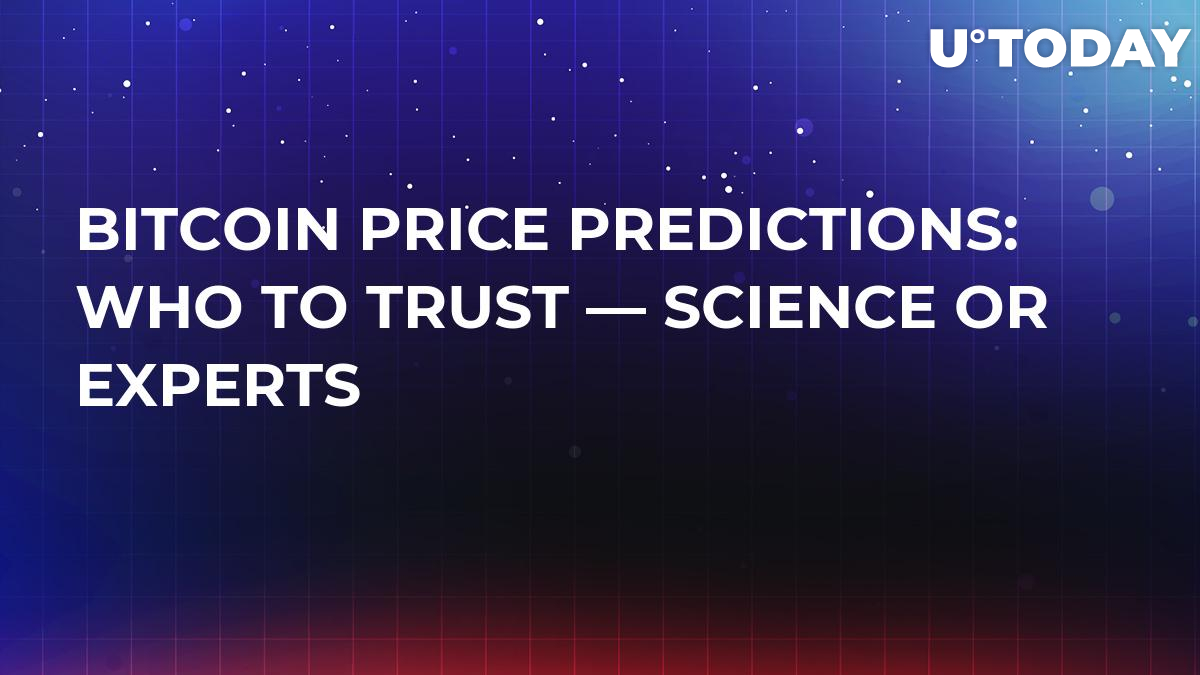 Anyone involved in the cryptocurrency space will say that they wish they could predict where the volatile asset will be in a week, a month, a year, or even five years. Predicting the movement of cryptocurrencies has become a big talking point as their movements are often prone to big news, as well as adoption and maturity.

This has led to many experts in the field trying to navigate the nascent ecosystem, using graphs, historic happenings, potential news events, and regulatory changes to predict where the price of Bitcoin will be at a certain time.

But, other than pure guesswork, there is even now emerging scientific efforts to try and predict the price of cryptocurrencies. These scientific trends often incorporate different datasets, such as social media interest, and other correlations.

But if there any point in even trying to see the future of the Bitcoin price? Should science be trusted, or even more so, should the experts be given the time to even state their thoughts?

There has been a long-standing tradition of those who have entrenched themselves in the cryptocurrency space to give their predictions and thoughts as to where the price of Bitcoin and others will go over time.

Some of these experts have used their previous knowledge of the stock markets, such as Ronnie Moas, while others based it purely on their long-standing involvement with the ecosystem, such as Tom Lee.

These experts often aim to give predictions for the price at the end of quarters or cycles, but they are mostly protected in their prediction as there is little to lose. If a prediction is woefully wrong. The expert can simply blame external factors, of which there are many.

However, one expert who has put a lot on the line is maverick John McAfee who says Bitcoin will reach $1 mln or else he will eat his own genitals. Still, these predictions are mostly guesswork based on current or previous trends, which in cryptocurrency can change very quickly.

There is also now a notion that the price prediction can be done a little more scientifically, rather than the guesswork of some individuals.

“Many previous academic studies had shown that online indicators, including social media activity, do exhibit relationships with cryptocurrency prices. However, these occasionally differed on their findings, depending usually on the particular data period analyzed. We noticed an interesting study using a technique called wavelet coherence which demonstrated well that certain relationships (roughly, correlations) aren’t always uniform over time — they are, in fact, changing,” Phillips said.

“We set out to revisit the use of wavelet coherence and extend that study. We wanted to validate that relationships were still present and temporally dependent, i.e. coming and going over time, when looking at a larger dataset (multiple cryptocurrencies, indicators, and a larger time period). Also, we wanted to check that relationships involving the new indicators were leading, as opposed to having changes in social media lag the price.”

Essentially, the scientific study is much more data-dense and looks at factors that run deeper than current and past trends. The study looked at things like online indicators in the form of Google and Reddit trends, as well as news events.

“The main finding was that medium-term relationships (8 to 32 days) strengthen between the online indicators considered (Google trends, Reddit data, etc.) and cryptocurrency prices during bubble-like financial regimes. As well as explaining why relationships have been observed at certain past times, this observation also suggests these online indicators could potentially be used in a predictive model for bubbles, which are of obvious interest to those looking to understand and track their changes,” Phillips added.

Is this the answer?

So while expert predictions are interesting to look into and see why people believe certain things will happen, they are no more accurate than a lucky guess. Predictors can revel in a correct guess, but deflect off an incorrect one.

In the more scientific look at price prediction, there is a lot more work and evidence being poured into it. So, like any sort of study, while it may not be reaping rewards just yet, there has to be a belief that with enough data, trends and repetitions will become more apparent.

Still, it is a dangerous game staking anything on the prediction of the market, it has been attempted with almost every market in the world, and it has never become absolutely accurate.