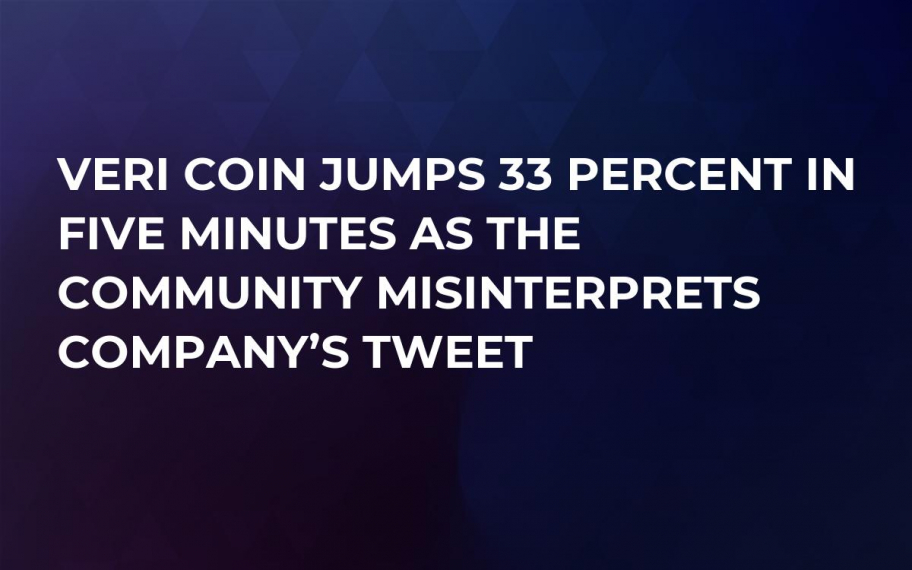 While Bitcoin and other three top cryptocurrencies fall due to the news of the ‘cyber intrusion’ at the small Korean Coinrail exchange, it is not all that bad in the market if you take a look downwards at some small-cap cryptos.

According to Coinmarketcap.com, there are four altcoins that went up whereas the aforementioned ‘big coins’ sank a little.

The Veritaseum, an ERC20 coin that comes 80 on the top-100 cryptos’ list, first went up seven percent over the past 24 hours and then soared 33 percent and reached $104.82 just within five minutes when the company tweeted yesterday that the platform’s broker/dealer license had been accepted by US regulators.

Veritaseum's application for a broker/dealer license has been accepted by US regulators. We look forward to moving forward to what we hope is the ultimate approval of our request to become a full fledged broker/dealer of securitized digital assets & digital securities in the US

The happy community seemed to confuse ‘accepted’ and ‘approved.’ This sounds like the best explanation of the coin’s fast rise.

Later on, Reginald (Reggie) Middleton, Veritaseum’s de facto executive officer, posted another message to make sure there are no misunderstandings. He did assure the followers, though, that the acceptance is the first step that may lead to the positive and long-expected result.

To eliminate misunderstanding, having an accepted is not the same as having that application approved, but we are working very hard to obtain approval. Veritaseum envisions a much more egalitarian, less risky, more transparent financial world using blockchain/network economics

Soon after the second tweet emerged, investors responded and VERI dropped by whole 22 percent to the level of around $79 per coin. This time it took the market around 20 minutes to digest the news.

The other three tokens that have demonstrated positive dynamics are Emercoin (9.71 percent rise), Theta (4.89 percent up) and Bibox token (BIX) (1,67 percent growth).

No single trend can be seen in the rise of these coins and VERI. They just seem to have responded to some local news in their communities.

Still, it is good to see some coins entering the green area among the overall bearish market.