The Power of One: Do Whales Have the Power to Rock Bitcoin’s Boat?

Darryn Pollock
Cryptocurrency market may be growing, but it is still small enough that individual players can make a big splash in the way the price moves 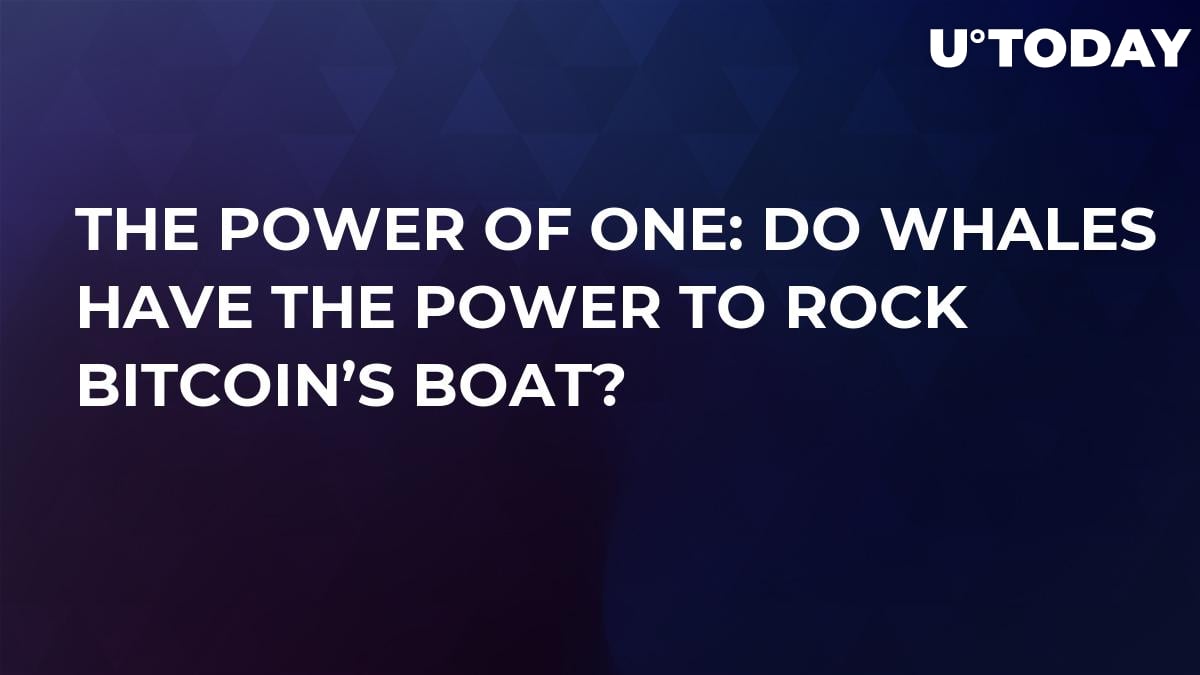 In most major markets today, the price fluctuation has a lot to do with news or group sentiment, it is not very often that an individual can affect the price of gold, for example. However, the cryptocurrency market, while being worth billions, still is prone to the odd splash from a big whale.

Whales are big money players within a market, and because of Bitcoin’s humble beginnings, where they were worth a few cents at a stage not too long ago, there are a lot of people out there who have quite a big haul from holding onto their coins.

But then, there are also people who have made their fortunes in Bitcoin that have enough to rock the boat, such as those tied to the infamous Silk Road, as well as people involved in Mt.Gox and its subsequent hack.

So, with Bitcoin suddenly plunging in price a week ago, with no real catalyst being offered, was it one individual flexing their weighty wallet? And if so, what are the dangers of having individuals with so much power in what is supposedly a decentralized system?

The sudden drop that saw the cryptocurrency market plunge a few billion in terms of market capitalization in the last few weeks has been questioned relentlessly with a catalyst yet to be found. Goldman Sachs was lined up as a reason for the sudden fall, yet they denied it when they decided to delay their trading desk.

This made the speculators start revving up a few conspiracy theories, and those on Reddit delved deep into the working of the transparent Bitcoin address system.

50 transactions involving a total of 50 500 Bitcoin originating from one whale’s wallet were moved between Aug. 23 and 30. Based on Aug. 22nd’s closing price, they would be worth about $320 mln.

Some speculated that the money being moved was from a wallet tied to Mt. Gox, especially ahead of claims being allowed to open against the former exchange for corporations to recoup their money. There was also the belief that the move could have been from the Tokyo Whale, Nobuaki Kobayashi, the lawyer for the Mt. Gox trust, who has in the past made big money moves.

Even Silk Road and Ross Ulbricht, who went by the alias “ Dread Pirate Roberts, was hauled up in debate while he sits behind bars. Much of Robert’s funds were seized, but because of the anonymous nature of cryptocurrency, it is impossible to tell if he is totally devoid of all his Bitcoin fortune.

The power of one

The potential that one individual, moving a lot of money, that is not that hard to have come by in certain circumstances, affecting the market as it did is quite disconcerting. Bitcoin’s decentralized nature is supposed to be offering power back to the people and allowing a democratic system of finance.

However, in terms of its market, and as a commodity, there is already a lot of evidence that it is not as decentralized as many would like to believe. Banks and financial institutions have a lot of say in how the market moves with their own speculation of joining in or slating publically the cryptocurrency market.

If it is also true that individuals have as much sway as they do to manipulate the market, and bend it for their own personal gains, then it proves that the cryptocurrency market is still very small, and it has a long way to go before it can be considered truly matured.

But it is nothing new, there was, in 2017, an instance where an individual labeled Spoofy, was credited with affecting the market. It came down that this trader, or small group of traders, was purposely manipulating the market with a big bank balance.

Not only about manipulation

However, in the case of the latest conspiracy theories about the 50,500 Bitcoins that were moved, they might also have nothing to do with the cryptocurrency market crashing, even if it was a Mt.Gox move or something to do with Silk Road.

This is actually really interesting because of the Reddit detective work that’s been happening and just people making these assumptions that this whale is cashing out,” said Kim Grauer, senior economist at Chainalysis. “It leads to conspiracy theories that someone’s trying to sabotage Bitcoin- just from someone doing an administrative move of their funds for security purposes, or we don’t even know why they have done it.”