Darryn Pollock
Cryptocurrency market has continued to plunge after a sudden and sharp fall took Bitcoin below $7,000 yesterday 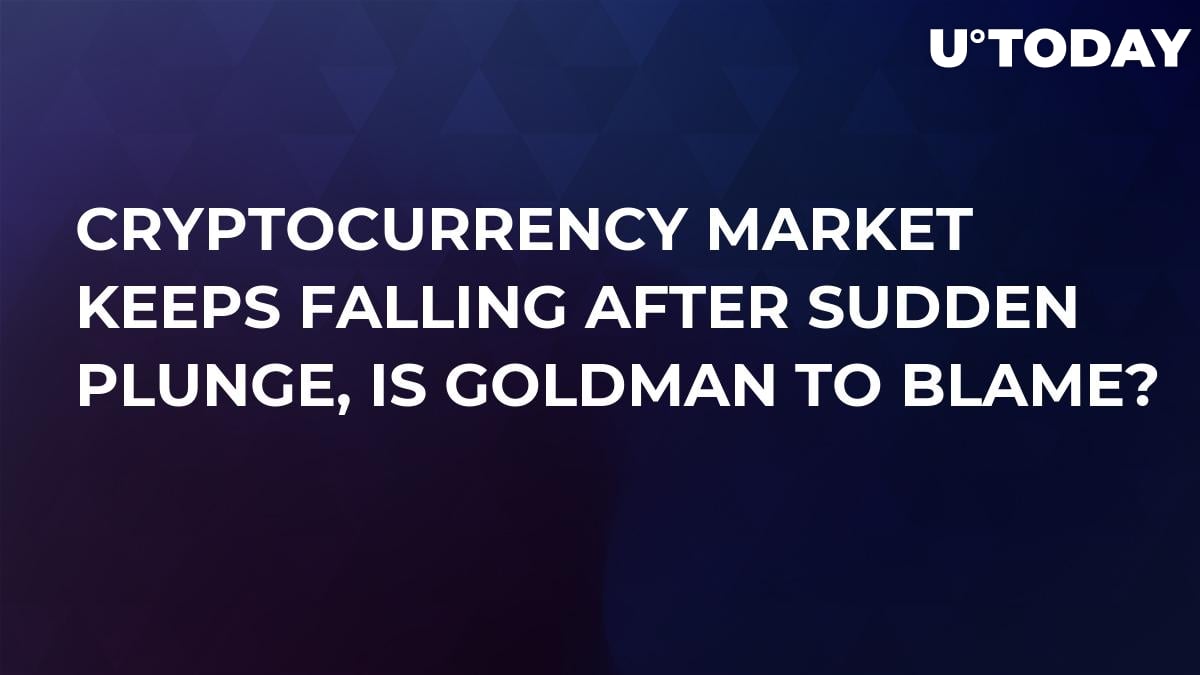 Seemingly out of the blue the cryptocurrency market took a sharp fall yesterday as Bitcoin price fell below $7,000 after making steady gains, and reaching a new one-month high. The entire market essentially followed the fall which struggled to be tied to any catalyst.

However, less than 24 hours later and the markets have plunged even further with every coin in the top 100 showing losses over 24 hours. Bitcoin is down 12 percent to $6,400 while the likes of Ethereum and Bitcoin Cash have fallen 20 percent.

As market analysts look for a reason for the fall, many are pointing towards a decision by Goldman Sachs to backtrack on plans to open a cryptocurrency trading desk.

Down in the dumps

The initial fall yesterday took the market by surprise as some coins, including Bitcoin, lost four to five percent in less than an hour. It was market-wide as most coins followed the fall. However, the bleed has continued, and that can be down to panic selling, as well as perhaps something in the news about Goldman Sachs.

Bitcoin’s price hit a low of $6,279 in this latest fall but has pulled back up to $6,444. But other coins have faired a lot worse. Pundi X has lost the most in this less-than-24-hour drop, shedding nearly 30 percent of its value. Then there is Bitcoin Diamond, which, like Bitcoin Dark, experienced massive gains, but is now dealing with a correction and poor market sentiment

As is often the case in mainstream media, a lot of the blame for this fall in the market is being put down to a decision by major Wall Street player Goldman Sachs to backpedal on its decision to launch a trading desk for cryptocurrencies.

They have sited legal uncertainty as the primary reason for this decision, which casts a bigger net of uncertainty over the cryptocurrency market. In recent times, the effect of regulation has been clear and obvious. Decisions of ETFs, for example, have also played their part in keeping the market down as regulators continue mulling the merits.

Naeem Aslam, Chief Market Analyst at ThinkMarkets, believes that the decision from Goldman is not such a big factor as to cause this collapse, he believes that the institutionalized entities testing the cryptocurrency waters only play a small part in any market.

“So the question is if Goldman Sachs stops exploring the option of crypto desk, can this entire thing collapse?” Aslam mused. “Well, let's think slightly outside the box and move away from Goldman Sachs effect to answer these questions. The reality is Bitcoin futures are already trading on major exchanges. But, the volume has been thin from day one, I am not saying it hasn’t improved, it certainly has. But if you compare the volume with other majors commodities, it is only then you can see the difference. But then again, Bitcoin is fairly a new thing so it will take time before it gets there. Hence, for me, it is more important to keep an eye on this part of the equation. “

“Investors should keep one thing in mind, these banks have only one common goal- to make money for their clients. So the investment banks may actually play an old trick in the book, by first creating a panic in the market, this would trigger a major sell-off. A perfect scenario to buy something when blood is on the street. And then as the market becomes a little stable, we get news that Goldman Sachs is back in business. Who you think would have benefited?”