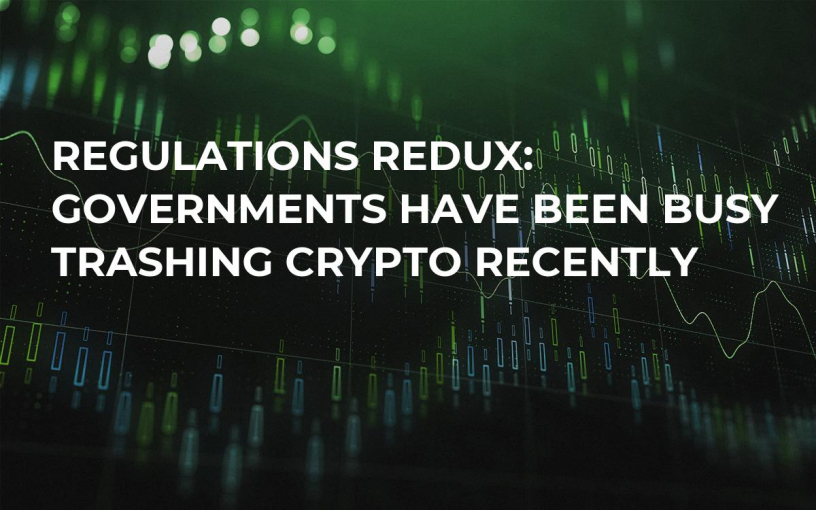 Regulating Bitcoin and other digital currencies is the talk of governments worldwide right now. In just the last week, central bankers, regulators and national governments have all called for increased regulation of the space. Some jurisdictions have even been implementing such regulations. Let’s take a look at what’s happened in the last week.

Thailand’s central bank has banned the country’s banks from dealing with digital currency. They are not allowed to invest in cryptocurrencies, trade in them, create digital currency exchanges or advise customers about them. The central bank has reiterated that Bitcoin and other cryptocurrencies are not legal tender and warned about the potential for such currencies to be used for money laundering and other illegal purposes.

The IMF isn’t a big fan of crypto either. Managing Director Christina Lagarde told CNN Money that regulation is “inevitable” and the governments of the world need to work together to ensure Bitcoin and other digital currencies can’t be used to launder money or finance terrorism. The IMF carries a great deal of sway in international finance, so Lagarde’s views will be given heavy consideration by regulators.

Europe’s “three ESAs” or European Supervisory Authorities have also warned on Bitcoin and other digital currencies. The ESAs warn that cryptocurrency is not suitable for investment purposes due to its volatility and unregulated nature. They also warn of misleading information, illiquidity, scams and other factors that they believe should discourage consumers from investing in virtual currencies.

Abu Dhabi is planning to create a “regulatory framework” for cryptocurrencies which will be “robust” and “risk-appropriate.” The country will use these regulations to “supervise” digital currency exchanges. Last fall, Abu Dhabi classified digital currencies as commodities and began working on regulations for ICOs.

Meanwhile, Gibraltar intends to become the first nation to fully regulate initial coin offerings or ICOs. Different jurisdictions have wildly different rules concerning such offerings, which often lie in a gray area in the law. Sian Jones, an advisor working with the tiny nation on its regulations, said:

“One of the key aspects of the token regulations is that we will be introducing the concept of regulating authorized sponsors who will be responsible for assuring compliance with disclosure and financial crime rules.”

At least one of Iceland’s lawmakers is unhappy with the amount of electricity Bitcoin miners are using, and he wants to implement a special tax on cryptocurrency mining. Iceland has become a popular location for digital currency miners because the country has access to cheap and abundant geothermal power. The cold climate also lowers cooling costs considerably, making mining doubly profitable.

“We are spending tens or maybe hundreds of megawatts on producing something that has no tangible existence and no real use for humans outside the realm of financial speculation. That can't be good."

One old quotation comes to mind when seeing all the fear, uncertainty and doubt being cast upon cryptocurrency by those in power:

Before 2017, digital currency was largely ignored, and if it was briefly mentioned in mainstream media, it was mocked. With the stunning rise of cryptocurrency price and adoption over the last year, Bitcoin and altcoins can no longer be ignored. Now bankers and governments are have moved on and are somewhere between the “laughing” and “fighting” stage. Finance experts laugh at Bitcoin as lacking intrinsic value and being too volatile, while governments trot out the twin fears of money laundering and terrorist financing to justify regulatory action.

If we are already through the ignoring phase and have progressed to laughing and fighting, it can’t be too much longer until we win.

World's Biggest Banks Caught in Major Scandal. What Does It Mean for Bitcoin?
Latest Cryptocurrency News
4 days ago