Dmitry Cake
Mayday, Mayday! The market spirals down as Bitcoin nosedives to $9,000. 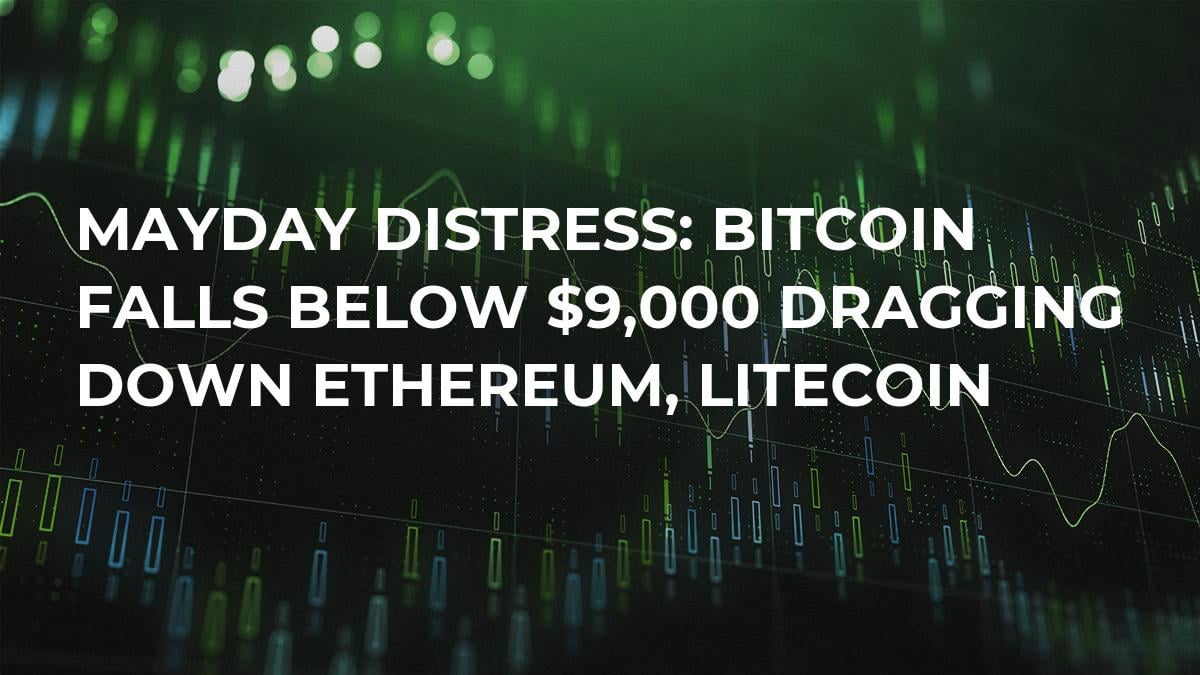 The last month of spring begins, and today we would like to look back on how expectations have been changing in the market since the beginning of the year. At first, investors assumed that given the intense media attention to cryptocurrencies, the correction would be brief and the new growth spurt will follow in February. This did not happen.

Then, realizing that the decline is getting drawn out, many prepared themselves for Bitcoin’s fall to $4,500. And again, the players were deceived in their expectations. Finally, after the trend reversal was confirmed, buyers bet on Bitcoin as the guiding star that would lead the entire market to a brighter future. But the altcoins took over the spotlight.

What does this all mean? Only that the cryptocurrency market does not lend itself to a medium term forecast in the classical sense (several months). A confident discussion of the potential of Bitcoin and other assets in the long term, also, can only be attempted by Mr. McAfee, perhaps. On the other hand, short term technical analysis never loses its relevance. Fortunately for our readers, that is exactly what we know how, and love, to do.

A reckoning day for EOS and NEO

The overwhelming majority of positions have turned red, with the only exception in the top 10 being TRON, with a growth of 3 percent compared to yesterday.

EOS is doing worst of all, falling by 16 percent, although that’s hardly a surprise. It is followed by NEO with minus 10 percent, and the third place from the bottom is shared by Stellar and Bitcoin Cash, which declined by 9 percent within the day. Needless to say, it was these four coins that especially pleased investors for the past two weeks. Well, the hour of reckoning has come.

As we predicted yesterday, Bitcoin investors could not take the pressure of a prolonged lateral trade, so by the end of Monday the rate of the cryptocurrency started creeping down slowly, having fallen out of the ascending channel formed in mid-April.

In addition, on the chart we see the formation of a narrow descending channel, which can become a haven for the price of the main asset in the next few days.

The immediate target of the decline is the range of $8,800 - $8,750. To those readers who agreed with our opinion from yesterday's review and opened a short position, in the hope of making a profit on the fall, we recommend reducing the position at least by half at this level.

The second goal, which we have been mentioning for some time, is in the range of $8,400 - $ 8,500. Its achievement is quite realistic, unlike, for example, $8,100, which also fits into the current picture, but might not be reached. This is related to the fact that investors will attempt to direct profits earned on altcoins mostly into Bitcoin, which will provide additional support to the asset.

Like Bitcoin, Ethereum could not hold on to the ascending channel. The hopeful news is that, unlike Bitcoin, it has not yet formed a descending channel, having rebounded from the nearest support in the form of the 0.236 Fibonacci correction at  $630.

The next support coincides simultaneously with the next mark on the Fibonacci grid, and with a solid mirror level at $575. We believe that achieving the second goal coincides with Bitcoin’s decline to $8,400 - $8,500.

A deeper correction of the main asset could theoretically open the door leading Ethereum to $535, but this scenario is not the primary one at the moment.

We have not reviewed the Litecoin chart for some time, but were not particularly surprised by the nearly complete absence of significant changes. The asset left the ascending channel a week ago and since then has been trading in the narrow range of $145 - $155, showing a flatter movement than even Bitcoin.

A more negative situation as compared to Ethereum is explained by the fact that Litecoin has reached the 0.382 value of the Fibonacci retracement already. Therefore, any additional weakness of the main asset will push Litecoin to a lower level - $135.

Buyers will have to work hard to hold this level, but they do not have any other choice - if the mirror support-resistance is broken, then the prospects for Litecoin are not at all rosy.

Among all assets discussed today, Ripple is still doing best of all. The growth channel has been tested, but not broken, although we are under no illusion about its reliability in case of Bitcoin’s continued correction. Among negative points, there is the decline of trading volumes which began after the events on the exchange that we addressed on April 26.

The nearest support, with a double confirmation in the form of a mirror level and a 0.382 value of the Fibonacci correction, is close by at $0.77. Further, there are the levels $0.70 and, as an extreme possibility, $0.65. However, we doubt that the latter will be reached. Most likely, despite the fears associated with the bugs (or malicious intent) of Bitfinex, investors will show increased interest in Ripple already at $0.70.