Dmitry Cake
The market is doing well for the second day in a row. Bitcoin price reaches $8,700 but the reversal is not yet official. 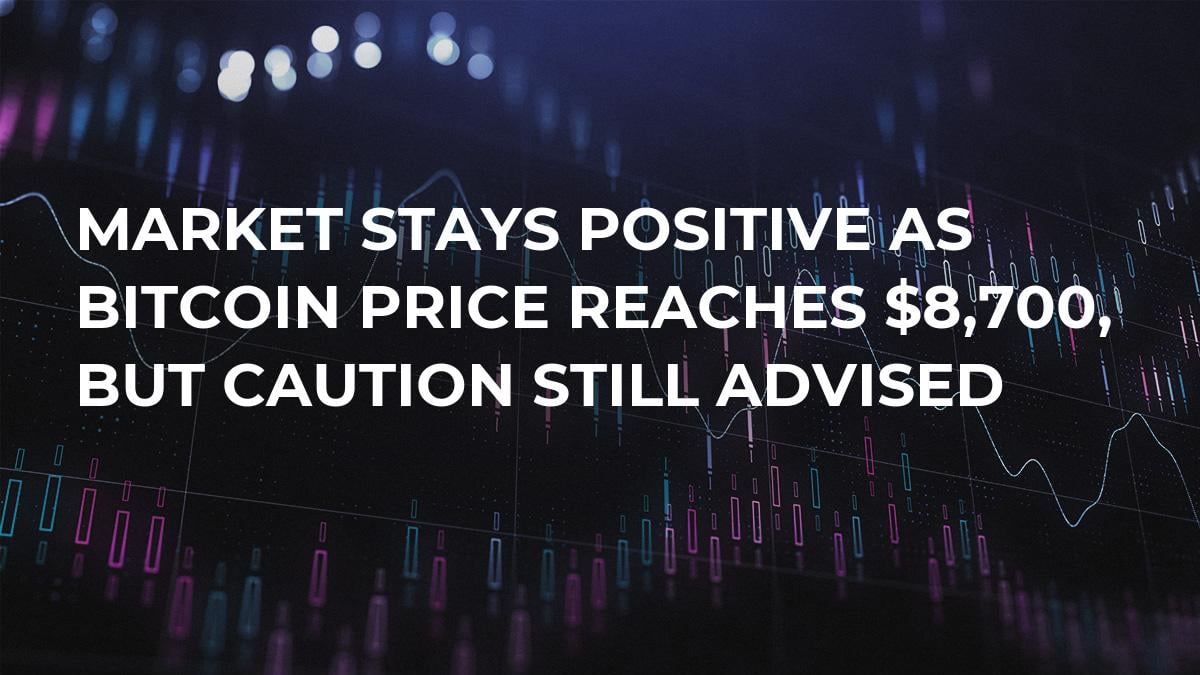 Investors have been able to keep up their resolution and initiative by the beginning of Tuesday, so today we have a good chance of seeing the continuation of purchases. Considering that the market experienced the third correction in as many months (Jan. 17, Feb. 6, March 18), the path promises to be thorny, but all the more exciting for that.

Negative tendencies are surprisingly soon forgotten on the cryptocurrency market, and with time more and more players will abandon caution and believe in “eternal growth.” We, however, will remain vigilant, and encourage our readers to do the same.

Market indicators confirm the investors’ mood: Bitcoin price had already reached $8,700, and is now at the level of $8,500; market capitalization grew by almost 6 percent to $335 bln. The underlying asset helped investors to wait out the storm and now gradually repays its debts to altcoins — Bitcoin cominance fell from 45 to 43.5 percent during the day, which is also a good sign in the context of market recovery.

Altcoins skyrocket at the first opportunity after downtrend

The price of some altcoins literally soared into the sky. In the top 10, the absolute leaders were EOS and Cardano — in just two (incomplete) days, both of them grew by 60 percent from the Sunday minimum.

Ripple is in second place — in the past 24 hours, the change is no astonishing, but an increase of 35 percent in the same two days is still an excellent result. The rest of the top assets grew by an average of 15-20 percent from the peak of sales, and 5-8 percent in the last 24 hours.

A supportive news cycle continues to encourage market growth. Yesterday, Yi Gang was appointed as the new head of People’s Bank of China (PBOC), who had earlier spoken positively about Bitcoin and recognized the right of ordinary citizen to use it. It’s too early to say or predict anything with certainty, but a lift of China’s ban on cryptocurrency operations might begin with this appointment?

Yesterday, the situation developed according to a bullish scenario, so Bitcoin managed to achieve several goals at once. First, buyers were able to protect the level of $8,200 and the 0.618 Fibonacci retracement, and second, they managed to break the upper boundary of the local descending channel (to avoid confusion, we marked it in orange on the chart). Despite the bears’ attempts to return the price to the lower register, the break was quickly recovered by purchases to previous levels.

For the moment, the price is moving not just inside a steep channel, but along a parabola. This growth can’t continue for long, and the bears seem to be in hiding, plotting new schemes against the bulls. Therefore, a slight rollback would be more than appropriate. We believe that it could happen when the price reaches the next boundary of the descending channel: if the parabola will remain relevant by that time, we are talking about the level of $8,870.

After recharging their batteries, buyers will be ready to move on to further prospects in the form of the $9,000 level, and further, $9,400. The latter of these targets is doubly confirmed by the 0.786 and 1.618 values of successively constructed Fibonacci expansions.

In case of a negative development, if the bears have already licked their wounds, we can see a repeated downward break through the channel and a testing of the $8,000 level, which we also wrote about yesterday.

The minimum price of EOS in the course of the current correction was just under $4. Even though some instruments of technical analysis earlier pointed to a possible price of $3, buyers showed significant interest toward the potential competitor to Ethereum. Clearly, the culmination of sales has passed, and EOS can fall below $4 only in case of an extremely negative and extremely unlikely scenario. A correction to the range of $5.1- $5.4 is much more probable.

Growth targets, on the other hand, are quite clear. With a high degree of probability, the first is $6.8, coinciding with the mirror level of support-resistance, and then $7.9-$8. The second target is confirmed not only by the 1.618 Fibonacci extension, but also by fair price for the asset for the period since beginning of December.

Whether to reduce positions upon reaching this mark is every investor’s personal choice, depending on goals, entry points and the state of the market. From time to time, we will return to this coin and discuss further prospects.

Out of the top 10 assets, Cardano took the most damage in the course of three corrections. The price minimum was $0.12, although just a month ago that seemed impossible. We will remind our readers: nothing is impossible in the cryptocurrency market!

After the reversal, buyers showed quite a bit of activity, as evidenced by significant trading volumes. The asset managed to break out of the descending channel, but so far the price has not been able to get a secure foothold above it.

In case of continued growth, we see two potential targets — the level of $0.26, coinciding with the minimum of February 6 and now acting as a mirror, and $0.3. In addition to being a psychologically attractive round number, the target is confirmed by the value of 1.618 Fibonacci extension, as well as the fair price since the end of the previous decline.

In case of unpleasant surprises on the part of Bitcoin, we can expect a repeted test of the channel, and if that doesn’t hold — correction to the level of $0.16. However, at the moment, such a scenario seems unlikely.