Illusion of Stability: Bitcoin Price Settles at $9,000, But Change is Coming Soon 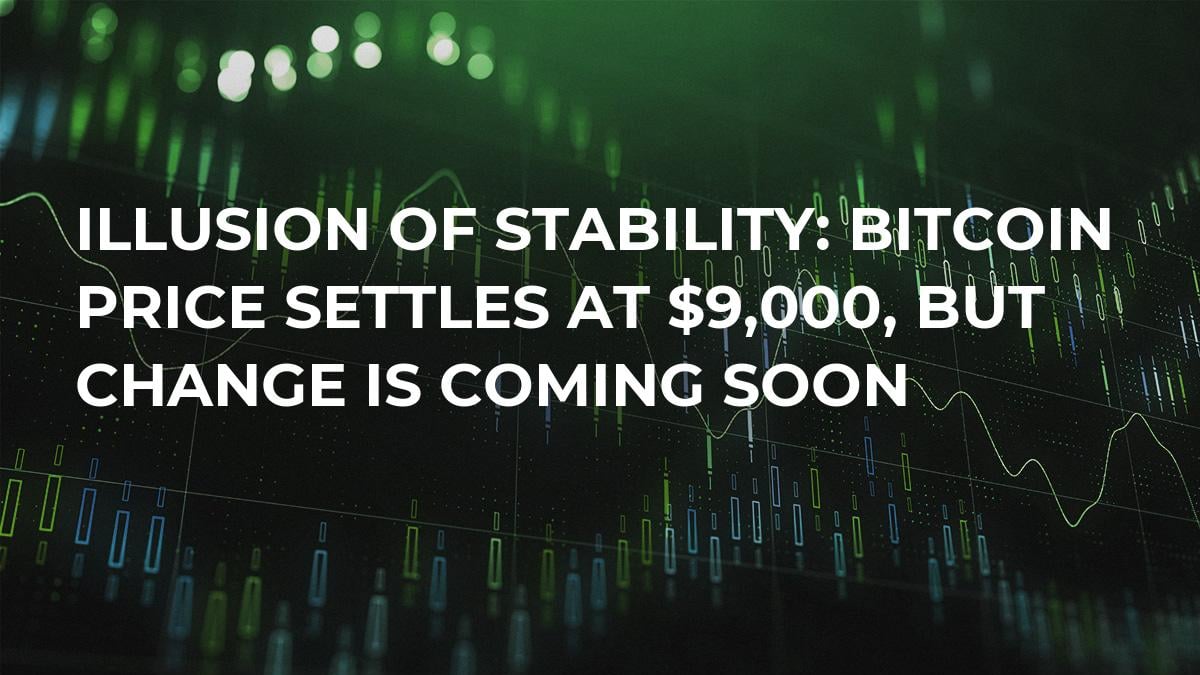 So far, neither the bulls nor the bears have been able to turn the situation in their favor, but some trends are emerging and we are excited to tell you about them!

At the time of writing, the market is in the midst of a lateral movement or, put another way, a flat market. When we say “market,” we primarily mean Bitcoin, of course, since the correlation between its price and the price of other coins is as strong as ever.

Altcoins may show more dramatic values of growth and decline, but the general direction of their movement continues to follow Bitcoin.

Total market capitalization practically hasn’t changed since yesterday and is now at $375 bln, Bitcoin price is at the level of $9,100, and dominance shows miraculous stability- 41.8 percent for almost two weeks running.

In the top 10 assets, unity and peace reign- prices remained nearly unchanged overnight. Their fluctuation ranges from zero to two percent for an overwhelming majority of the assets. The only troublemaker is NEM, continuing its victory procession and growing by another 16 percent.

Furthermore, in the past 24 hours, NEM jumped four positions in the rankings and moved from 13th to 9th place. You don’t see that every day! We spoke in detail about the causes for such growth and the price targets in yesterday’s review.

The tasks that we defined for the bulls and the bears yesterday have not been carried out, so the price of the main asset has not changed, although it did not remain entirely motionless in the course of trading. Bitcoin is still bound within the familiar $1,000-wide channel.

At the moment, the advantage is with the bulls, and here’s why. First of all, the bears failed to bring the price down to the lower boundary of the channel- despite determined attempts, at the most decisive moments a mysterious buyer would appear to support the asset with good purchase volumes. Second, selling volumes are falling, while purchase volumes remain steady.

And third, the hour timeframe clearly shows the technical analysis figure of the "triangle" which can be both bullish and bearish, but in our case, prices did go up after all, showing the strength of the buyers.

The listed facts don’t necessarily indicate a certain victory for the bulls. Bears can enter the game at any moment to try another attack for breaking the trend. Their goal remains the same-  the boundary of the channel and the level $8,700.

For bulls, today’s task is more ambitious- to find a foothold above the resistance level $9,400, preferably above the 0.382 Fibonacci retracement which coincides with $9,550.

Taking into account all of the circumstances, we estimate the odds to be three to two in favor of the bulls. Be cautious, observant and remember- there is no place for hopes and emotions in the market. Only a sober assessment of the situation and thorough analysis can lead to profits.

The second asset by market capitalization is still moving within the global downward channel, which seems impossible to break for three months now. The last Bitcoin correction forced Ethereum to fall to the lower register of this channel.

Investors shouldn’t lose their composure. However, we are far from the February minimum, and the price found a new support in the region of $640 (we wrote about this level on March 7).

The volume profile data suggests that the maximum volume since the beginning of December was traded in the current range. This means that Ethereum reached its fair price.

We would like to reassure our readers- the concept of “fair price” doesn’t mean that from the point of view of technical analysis the asset should cost exactly this amount. It just indicates that the interest of market players is focused on these values. For Ethereum, this level can become a good basis for further growth.

In terms of targets (in case of a market reversal), they are $730, $750 and $780- all coinciding with key values ​​of the Fibonacci grid and mirror levels. With continued lateral movement, and in the event of a slight decrease in Bitcoin price, the triangle marked in green becomes relevant.

The best strategy in the current uncertain environment is to wait. This concerns both those readers who have decreased long positions at the price we recommended ($770), and those who are still holding Ethereum for the long term.