I Am With Banks: Hillary Clinton Claims She Doesn’t Own Bitcoin

Alex Dovbnya
We get it, Hillary won’t accept Bitcoin. Here’s where other high-profile US politicians stand on crypto 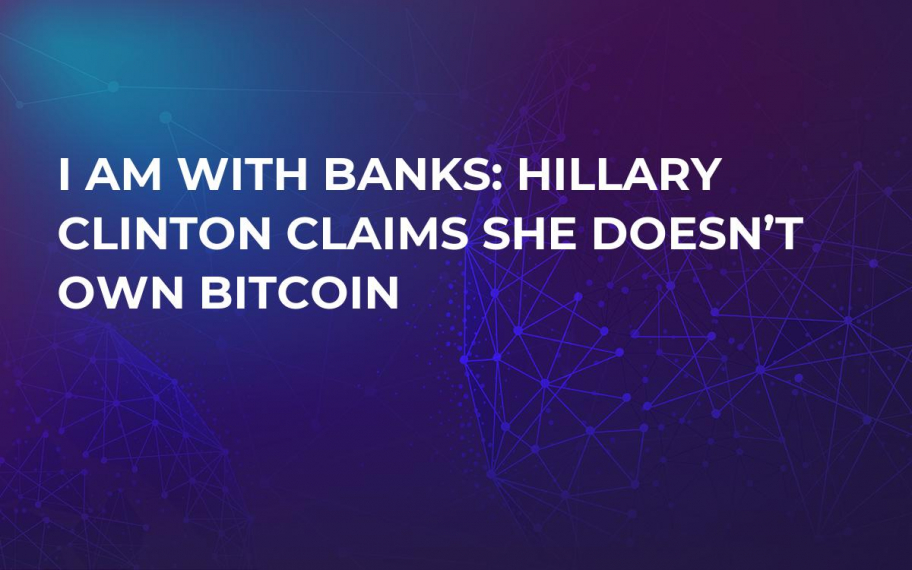 A former US presidential candidate Hillary Clinton has recently stated that she doesn’t have Bitcoin holdings. While high-ranking politicians are wont to stay away from crypto, there are still plenty of crypto-friendly candidates on the US political scene.

At the Lesbians Who Tech Summit in New York, Hillary Clinton answered a slew of rapid-fire questions. One of them was whether she owns Bitcoin to which she (unsurprisingly) gave a definitive answer “No.”

However, this is not the first time when “Hillary Clinton” and “Bitcoin” appeared in the same headline. A former presidential candidate from the Democratic Party she dismissed the idea of accepting Bitcoin, calling it too “libertarian.” However, a recent research shows that crypto-political landscape has extended beyond the libertarian ideology (in fact, only 24 percent of crypto holders identify themselves as libertarian). The leaked Podesta emails further confirm that Hillary wasn’t in favor of giving green light to Bitcoin donations during her 2016 presidential campaign.

The Trump administration, so far, has shown a rather mixed reception of Bitcoin. Back in October 2017, there was a slew of anti-Bitcoin statements from White House homeland security advisor Tom Bossert who pledged to “keep an eye” on crypto.

On the flip side, ex-Trump advisor Gary Cohn predicted that there would be a global cryptocurrency in an interview with CNBC. Cohn served as the National Economic Council in the Trump administration. Steve Bannon, who is considered to be the mastermind behind the Trump’s campaign, also revealed his Bitcoin holdings, also mulling creating its own cryptocurrency.

As U.Today has recently reported, Trump has also recently appointed a crypto-friendly SEC commissioner who can potentially sway a vote in favor of Bitcoin ETFs.

Back in 2015, Senator Rand Paul of Kentucky became the first presidential candidate to accept Bitcoin. The upcoming 2020 US presidential race already has its crypto-friendly candidates– Andrew Yang made an announcement about accepting cryptocurrency contributions in July. Numerous congressional candidates also show support for crypto, including Kelli Ward who is a frontrunner in the Arizona Senate race.