Forbes: 95% of Exchange Volume Can Be Wash Trading, Pushing Bitcoin Price Up

Alex Dovbnya
??Forbes believes that a great number of crypto exchanges giving data to CoinMarketCap could be faking their trading volumes to push BTC price up 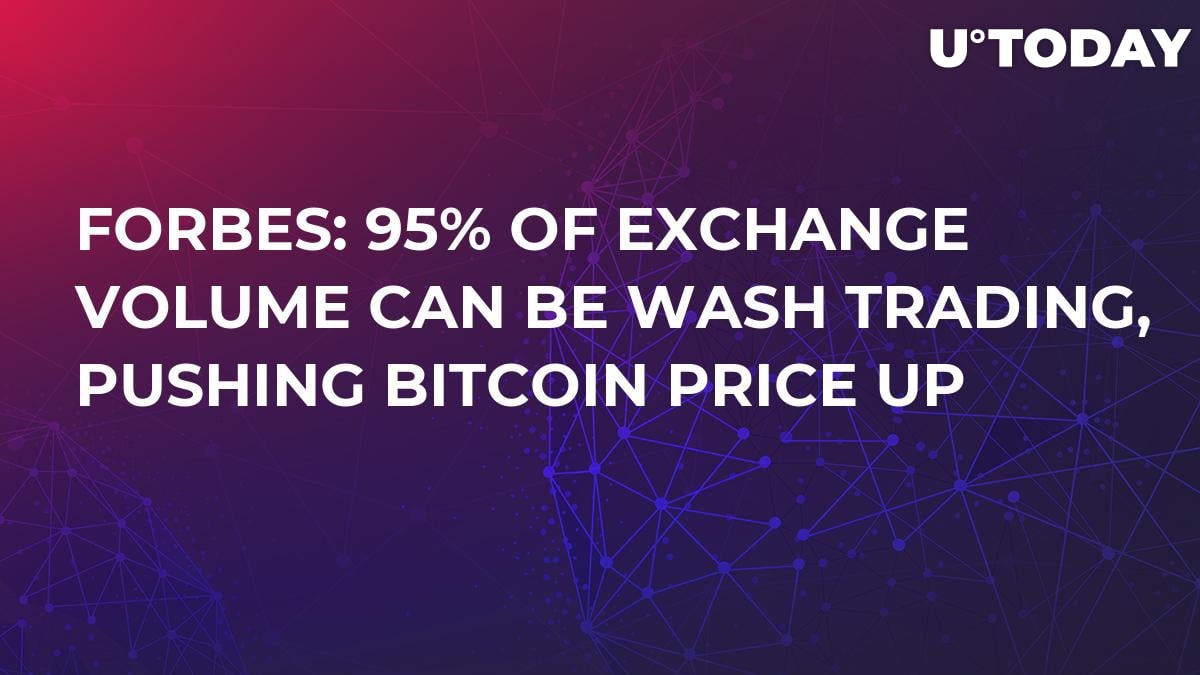 A recent Forbes article suggests that not all data from crypto exchanges on CoinMarketCap can be trusted. The data on trading that comes from major trading venues, such as Binance, Coinbase, etc, is out of the question.

But there is a great deal of small exchanges that wish to attract customers, further writes Forbes, which they could achieve by faking trading volumes and luring more traders to come over. As a side effect, this can pump the Bitcoin price too.

Gavin Brown from the Future Economies Research Centre at Manchester Metropolitan University believes that exchanges benefit from large trading volumes even if they are faked, since high liquidity brings in more traders and investors.

"The more liquidity an exchange appears to have, the more appealing it becomes to investors, this is simple buying psychology."

A similar thing happens in the regular stock market, writes Forbes, even though the regulatory pressure there is much stronger, and unfair players get greater punishments applied to them.

How is ‘wash trading’ performed?

An example of how wash trading can be done is conducting trades internally without moving them to the market. E.g., Brown says that if one trader wants to buy 2,000 shares and another one wants to sell the same amount, a broker would simply conduct the deal between them through netting. Traders will not even know that the deal was made out of the market.

As per Brown, brokers often do such things to avoid transaction fees on the market. Thus, wash trading is falsifying trades when the same person acts on both sides of a deal.

Trading bots will do the job

As per Forbes, Brown also states that wash trading can easily be done via computer algorithms – bots, which are often used by exchanges.

"It’s easy for exchanges to put together a bot to add layers to their trading structure, so they don’t ever have to engage in these trades on a personal level."

He also mentioned that:

"If we all saw the true volume of what was being traded on exchanges, we would probably only see a tiny proportion of what is being reported."

What such kind of bots do is that they place a great number of buy orders and then withdraw them at the last minute. Still, other traders see that a lot of orders are placed to buy and start buying too. They do it for real, though.

Also, currently, actual trading is often conducted by algorithms as well. Crypto Fund Research reports that over the last half a year, the crypto market has been flooded with over 17 algorithmic funds. Among them are 40 percent of recently emerged hedge funds.

The conclusion the author of the Forbes article arrives at is that the recent Bitcoin spike towards the $5,000 mark was due to trading bots.

Oliver von Landsberg-Sadie, the CEO of London-based BCB Group believes that somebody placed a purchase order for 20,000 BTC across three platforms: Bitstamp, Coinbase and Kraken. This got bots down to work, since they saw a positive market move.

"There has been a single order that has been algorithmically-managed across these three venues...If you look at the volumes on each of those three exchanges – there were in-concert, synchronized, units of volume of around 7,000 BTC in an hour."