Fear and Uncertainty Are Back As Bitcoin Price Drops to $10,600

Dmitry Cake
Nervous traders are booking small profits as uncertainty reigns in the cryptocurrency market. Wise and patient investors are likely to win in the long run 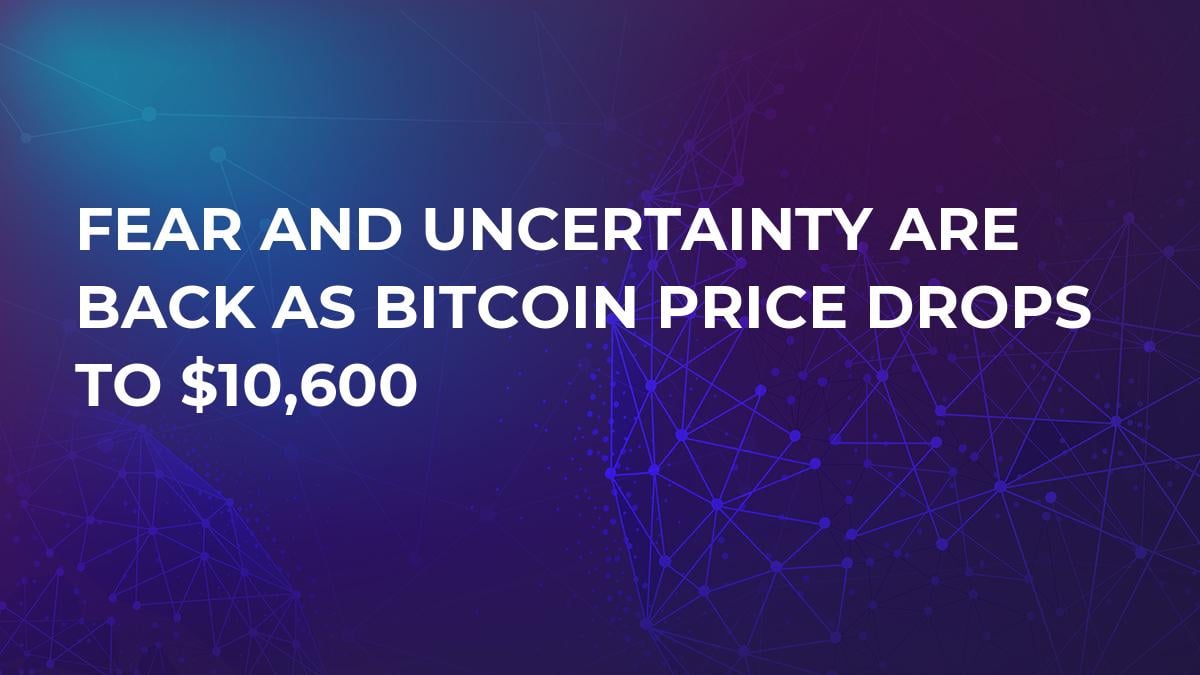 By midweek, market indecision reached its peak, and the sustained expectation of a breakthrough to new local highs pushed particularly nervous investors to start booking profits (and clearly, for some, losses).

The result was a further decline in the value of most assets and a decrease in total market capitalization to $430 bln, which is $30 bln short of the previous day's value. Bitcoin is the catalyst for the reaction, as always- there is no sense looking for the cause elsewhere.

In the course of the day, the price of the underlying asset had fallen to $10,600, which is exactly 10 percent less than Tuesday’s maximum. Dominance remains at the previous level of 41.8 percent.

Altcoins react to price drop, but not significantly

We have become used to market fluctuations and do not view them as threats to medium-term and long-term goals- the primary concern for investors is the movement of altcoin prices. Recently, they behave according to the principle of “separate growth, collective decline.”

In confirmation of this, we see amazing unity in the top 10- the daily price fall makes up about six percent for nearly all positions.

Monero stands out from the pack, having lost four percent, as well as NEO, which holds strong almost without change in value. NEO was addressed in detail in yesterday’s price review.

The worst off is EOS, having fallen by 12 percent. Despite the asset’s obvious promise, its Blockchain is still in the early prototype stage, and the explosive growth at the end of 2017 makes long-term investors think about reducing positions in an unstable market situation.

As per tradition, we begin our detailed analysis of the market situation with Bitcoin. Today, for greater effect, we would like to show readers a graph with a timeframe of 15 minutes, rather than four hours as usual.

When the market is turbulent, the microscope becomes a useful tool to reveal the root causes of price behavior. We can see that BTC, as we expected in yesterday’s review, found support at the key level of $10,800, but sale volumes significantly exceeded buyer demand, so there was no one to hold this bar.

Serious reinforcements arrived only at $10,600 where the bulls first showed themselves- we learn this from the long lower shadows of the candles. Then, we saw the formation of a double top at $10,900 with an interval of one and a half hours between peaks, and the activation of this figure.

At the time of writing, Bitcoin is trading at $10,600 within a local downward channel, marked in red. Sale volumes are steadily declining, but buyers are still asleep, so we allow the possibility of further decline to $10,500- the location of the mirror level, as well as the 0.5 Fibonacci correction, which has already proven its relevance.

The next bear target, $10,200-$10,300, is a critical level formed by the lower boundary of the ascending channel and 0.618 Fibonacci retracement. If it does not hold, we will have to consider the possibility of a new global correction.

However, for now, there are neither fundamental nor technical reasons for this scenario. To resume active growth, the bulls have to close the day at least above $10,800, preferably above $11,000. Once again, we ask our readers to remain calm and avoid succumbing to market panic.

We purposefully left our Ethereum charting mostly unchanged since March 1, to show our readers how important it is to make careful and precise projections since they can remain relevant for a long time.

The reaction of ETH to Bitcoin price movement has been quite restrained, reaching $810 at the minimum, which coincided with a relatively weak 0.236 Fibonacci retracement.

The cause can be seen in the important support which is located near the current value of $790. Further decline is dangerous, so we expect some surge in purchases near this mark. The volume profile indicates that active accumulation also ends at this level, which means that in case of its suppression, sales can accelerate to the range of $740-$750.

The fair price since the formation of Ethereum new logic (after the rapid December growth) is at $840, so if prerequisites for growth appear, this target will be easy to reach.

It will be followed by $900 and $920, targets formed by the mirror level and the 1.618 Fibonacci grid. For cautious investors trading in the short term, we can recommend stop-loss at $770, but only in the case of a global Bitcoin correction. To all the rest, we advise keeping current positions, but refrain from growing them.