Ethereum vs Litecoin — What Is a Better Choice for Investment?

Alex Dovbnya
Ethereum vs Litecoin: Which cryptocurrency to invest in? Read about predictions, prospects, and the advantages of LTC and ETH compared side-by-side. 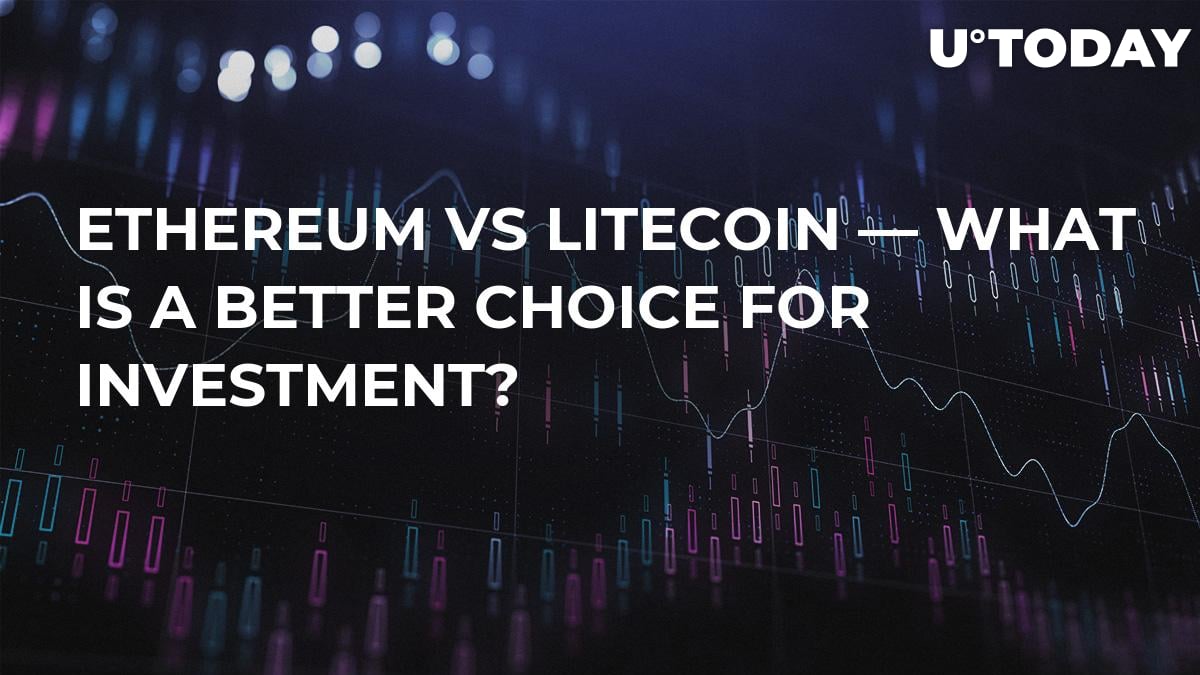 In the sphere of cryptocurrency, no investment seems to be a win-win scenario: price predictions prove to be useless, and it’s impossible to predict how much an asset will cost tomorrow, in a week, or in a year. You should expect volatility – all in all, things work this way.

The wisest thing you can do is to diversify your portfolio because Bitcoin has a fever, and there are many worthy cryptocurrencies around. But which alternatives are preferable? You should consider having Ethereum and Litecoin among your favorites – they are both worthy crypto assets. Which one is a better investment solution? Let’s compare them and decide.

Please note that the article is only made for you to make an informed decision – this is not a call to action, and it shouldn’t be viewed as ultimate investment advice.

Before we start comparing the two cryptocurrencies from an investment standpoint, let’s take a peek at their technological foundations.

While Litecoin is quick and cheap, Ethereum is a smarter cryptocurrency – it’s more than just a token. The Ethereum blockchain facilitates Ether transactions using so-called “smart contracts.” It means that the blockchain itself confirms transactions and contracts instead of third parties. The contracts can automate payments. For example, when goods and services are transferred, payments are sent instantly. The idea of smart contracts can eliminate all kinds of middlemen in both cyber environments (for instance, in crowdfunding websites) and real life (for example, in the sphere of real estate trading).

Litecoin doesn’t have such technological advances – it seems to be less functional. Ethereum simply continues evolving the idea of cryptocurrency decentralization that started with Bitcoin.

But why is Litecoin still a good option?

Litecoin has a lot of unbeatable advantages, including the following:

There’s one more thing that makes Litecoin a great choice – LTC’s application on the darknet. Although Bitcoin was the only means of payment in this sphere, recently other cryptocurrencies have also gained traction.

Competition on the darknet is very stiff, and within a short time, Litecoin has turned into the preferred cryptocurrency among dark web users. Litecoin accounts for 30% of transactions in the dark web, beating Monero and Dash. It’s fast and trouble-free, even though it does not guarantee total privacy and anonymity (which are the primary concern of dark web users).

Although purchases and activities associated with the darknet aren’t legal or ethical (mostly), the fact that people prefer Litecoin simply means it’s efficient. People get tired of high Bitcoin fees and switch their attention to Litecoin instead.

Currently, Ethereum trades at $118, while 1 LTC is worth $31.5. Will they grow in price this year? Let’s compare forecasts for both cryptocurrencies.

Although Ethereum faced hard times as other cryptocurrencies did in 2018, it is here to stay. The Ethereum blockchain is too genius to disappear and be underrated. How high will Ethereum’s price go in 2019 and later on?

Many crypto experts agree that when Ethereum becomes more mainstream and widespread, it can hit the previous records and reach $1,000 again. What does its price depends on?

What do experts think? According to Brian Schuster, founder of Ark Capital LLC, Ethereum has enough potential to reach the threshold of $100,000, if it replaces gold as a store of value:

“What if you believe that Ethereum is less like one individual business and more like a store of value, like gold? This gives us a potential market capitalization of roughly $10 trillion, leading us to believe that the price of Ethereum might rise as high as $100,000 per coin. We might even go one step further and say that Ethereum is not like one asset, but an asset to replace all currency that exists.”

“Like Bitcoin, there is little stopping Ethereum from being an alternative currency to fiat and commodity currencies. It’s rather the computing language that allows the smart contracts to exist that makes Ethereum more valuable than BTC (in my opinion).”

Olaf Carlson-Wee (CEO of Polychain Capital) agrees with him and says that Ethereum’s market cap can become larger than Bitcoin’s, which means one ETH can cost $3,000 and more down the road!

The market is ever-changing, but if the demand stays on the same level, it is not hard to hit those imagined numbers in the long-run. Ethereum should sooner or later beat its previous $1,400 record.

The vast majority of crypto experts agree that Litecoin is to reach the level of $200-300 this year. What will drive Litecoin’s growth is its technological superiority over Bitcoin, as well as affordable transaction fees.

The further – the better. What about Litecoin’s forecast for 2020? Longforecast.com shows that Litecoin will trade at the level of $780-1374 in a year. Oracletimes.com is another website that predicts Litecoin will reach the threshold of $1,000 by 2020. According to steemit.com, Litecoin will trade at $3,500 by 2020 due to the overall growth of the crypto market and advanced technologies. Good times are to come for Litecoin!

Walletinvestor.com is the only website with a severely pessimistic technical analysis: according to the published numbers, Litecoin will fall to $0.00001 and lose its value completely. It’s unknown what this analysis is based on. Luckily, no one else supports this view.

In 2019, the effect of the bearish market tendency and investors’ fears will subside, so Litecoin should rise above $100, gradually and steadily – this is the minimal threshold it should overcome. Therefore, it must be the right choice for short-term investments: you can reap returns on investment within a few months easily.

What to buy as a store of value?

Having appeared in 2011, Litecoin is one of the most stable altcoins on the market. Besides, it has a strong recall value, which is great considering there are hundreds of alternative cryptocurrencies around. A lot of exchange platforms support Litecoin, so it’s easy to sell and buy. That also makes it a great long-term investment.

Another factor worth considering is that Litecoin has a maximum supply of 84 mln LTC, which means no more coins will be emitted at some point in the future. The limited number of tokens could mean that Litecoin will become more valuable down the road.

Ethereum was introduced to the market in 2015, though it quickly gained interest among potential crypto users. Increasing interest made Ethereum recognizable: it enjoys the growing support from exchanges. Although Ethereum is not commonly used as a payment method, the situation can change in the future. It already changed when Ethereum left Litecoin behind in 2018:

750k. @VitalikButerin (who's still not giving away ETH) is on my heels, but I'm coming after you @bitcoin! ?

At the moment, Ethereum seems to be the best store of value: it has bright prospects moving ahead. Despite its young age, its smart contracts and blockchain are being widely used for the creation of dApps. Its growing recognition makes ETH easier to purchase, access and spend. Ethereum is likely to disappear from the market only if all cryptocurrencies sink into oblivion.

LTC vs ETH as a transaction medium

Cryptocurrencies were designed to serve as decentralized digital money, i.e. to buy goods and services. The Bitcoin example has shown us that proper scaling can be hard to achieve, especially if you don’t want to pay large fees. So, how do Litecoin and Ethereum perform from this standpoint?

Since Litecoin is Bitcoin’s younger brother that was created to serve as a more advanced online transactional medium, it is pretty good for regular transactions. It has a confirmation time that 4 times faster, with the average block time of 2 minutes 19 seconds. The transaction fee is about $0.04, which is nothing compared to Bitcoin’s charges. Considering the growing number of online users exploiting crypto, Litecoin is great for online transactions.

Although Ethereum’s fees are much higher (it costs about $0.85 to perform a transaction), Ethereum’s block time is less than 15 seconds, which makes it much better than many other coins. You can have several transactions processed within a minute or even less. Mainly for this reason, Ethereum has become the most traded cryptocurrency on the globe with millions of transactions performed on a daily basis. For comparison, Litecoin processes 50,000 transactions daily, and Bitcoin – about 230,000 transactions.

Both Litecoin and Ethereum are relevant as means of transactions: while Litecoin transactions are cheaper, users still prefer Ethereum – its instant block time is simply unbeatable.

Both Ethereum and Litecoin are top cryptocurrencies on the market – they have strong technological foundations, and both are supported by the crypto community. Ethereum continues being number one blockchain for the creation of decentralized applications and more than that. Litecoin is a greater alternative to Bitcoin, so we may witness how it will start replacing BTC in regular payments.

So, which cryptocurrency to choose? We suggest you buy 50/50 LTC and ETH. The market is volatile and you never know for sure which cryptocurrency will fail and which will grow. Diversifying your crypto asset portfolio is the best way you can ensure you’ll be financially sound.

What is clear is that Litecoin and Ethereum are here to stay and, most likely, you will double your investment in a couple of years (or even months). Keep tabs on market tendencies and always remember that you should not invest money you can’t afford to lose.

Disclaimer: The opinion expressed here is not investment advice – it is provided for informational purposes only. It does not necessarily reflect the opinion of U.today. Every investment and all trading involves risk, so you should always perform your own research prior to making decisions. We do not recommend investing money you cannot afford losing.