Ethereum Will Overtake Bitcoin But Competition Will Come From Ripple

Darryn Pollock
Bitcoin has always seemed untouchable, but that will, in time, change with Ethereum, the likely successor and Ripple the chaser 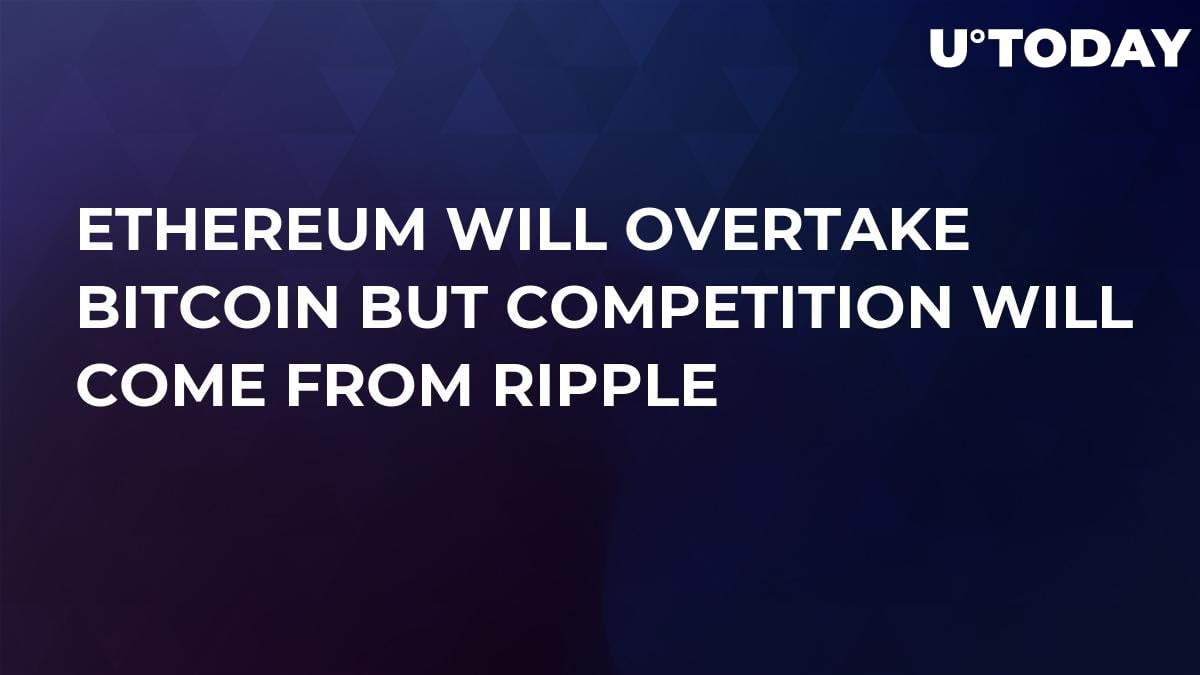 Ever since the genesis block, which was just over 10 years ago now, Bitcoin has stood firm at the top of the cryptocurrency tree with challengers never really getting close to its fame, or market cap.

However, the days of a handful of cryptocurrencies are well and truly over thanks in part to the ICO boom of 2016/17, as well as the development of other major cryptos in the past five or so years.

Ethereum was a breakaway development in blockchain and cryptos as the team behind it looked to create a “World Computer” rather than a simple distributed ledger. In terms of functionality, Ethereum opened the doors wide open.

This has led to a number of key projects trying to advance upon what Ethereum has done, such as NEO, EOS, and Cardano, just to name a few, but there have also been advancements in other uses for Blockchain.

The likes of Ripple have gone in their own, quite separate direction, but their mandate is starting to make more and more sense as it is realised that institutions and companies want to integrate blockchain, rather than be replaced by it.

True, Bitcoin evangelists will never admit that it can be replaced as the major cryptocurrency, but that is short sighted. The world is looking for a functional blockchain that can offer a lot, and that is why Ethereum will overtake Bitcoin, but don’t write off Ripple just yet.

Ripple is the one cryptocurrency that has from day one tried to distance itself from the “Cypherpunk” ways and rather offer itselves up to the “Big Evil” of banks and other institutions.

What we have seen is for cryptocurrencies and blockchains to be a success, they need to integrate and play along with the established order of regulators, institutions and governments.

Bitcoin of course is revolutionary and quite ahead of its time, even 10 years from its creation. However, time moves fast in technology and really, it is starting to show that it is fairly outdated as well.

Bitcoin’s success is predicated largely on its size, popularity, and age, whereas its offering is quite straightforward. That is not necessarily a bad thing; if it does one simple thing perfectly, it is still perfectly good.

Bitcoin is a blockchain that facilitates the movement of tokens across a distributed ledger, and that is great from a financial standpoint, but the potential that blockchain offers is underutilized by the biggest blockchain there is.

Ethereum is a blockchain that recognised this early on, with Vitalik Buterin helping create Ethereum when he realised Bitcoin’s inefficiencies. The smart contract system and its design as a platform makes it far more accessible and applicable in today's modern world.

Companies, institutions, even start ups and other blockchain developers, are looking to Ethereum for its usefulness, and because of this, once the blockchain reaches a level of functionality and stability that only comes from time and experience, one should see it start to encroach on Bitcoin's market cap.

So, while Ethereum is broad and open to a multitude of projects and applications, it is also dogged by other competitors that could sink it as a better offering. However, when it comes to Ripple, one can see it is fairly unique and quite desirable for banks looking to break into blockchain.

It is developed to be an intra-bank payment system that utilizes the blockchain, and it is arguably a centralised blockchain, meaning that it has a face and an organisation that people can do business with in the traditional sense.

This makes it much more attractive to banks who the blockchain is aimed at, and the reason why the market it is chasing is so important is because, like it or not, banks hold a lot of sway around the globe.

If Ripple can reach critical mass with banking institutions and become a staple for their digital needs, that traditional power behind them will see them catapult up the market cap and could overtake Bitcoin and Ethereum quite quickly.