Bureaucracy as an Indicator of Unsustainable Vertical Complexity 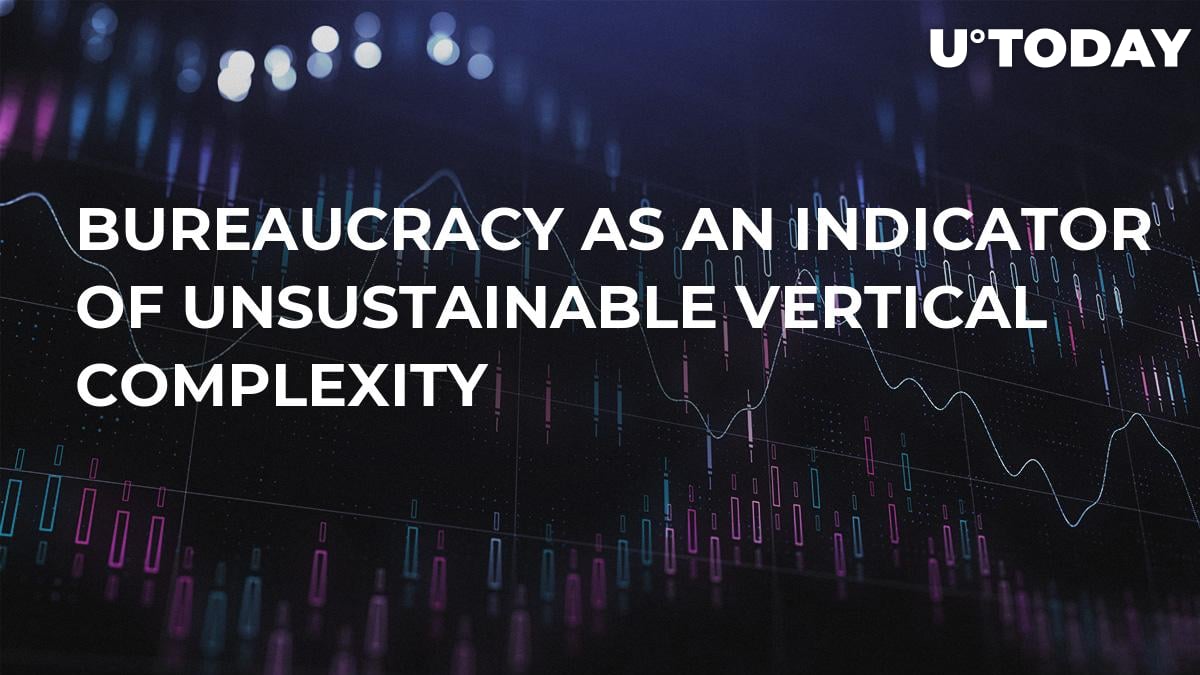 In his 1922 essay Bureaucracy, the German sociologist Max Weber, considered by some to be the father of organization theory, argued that centralized bureaucracy was an outright requirement for the healthy functioning of society. This was, in many ways, a pivotal moment in our developmental history as a social species.

Weber’s theory was embraced by at the time still industrializing nations in the West; consequently, bureaucratic entities and agencies sprung upon the world over to facilitate this transition. Bureaucracy made a brisk landing and was here to stay.

The Evolution of Modern Bureaucracy

Notwithstanding its initial endorsement by the masses, Weber’s theory of bureaucracy showed its major drawbacks in the post-industrialized world of the 1960s and 70s. What was necessary for everyday business half a century earlier started to become a gargantuan obstacle, as both individuals and businesses realized that excessive bureaucracy had made things very rigid, clunky, and slow to move. Furthermore, bureaucracy inadvertently started to dictate the very direction that both private citizens and companies had to take by forcing its mandates and regulations upon them, thereby eventually stripping virtually everyone and everything of their right to any remotely innovative or even independent enterprise.

For the past 30 years, first post-industrialized and then digital societies have been struggling to adjust to the ever changing world through this outdated but to this day influential bureaucratic model, always being caught between the what-to-do (idea) and the how-to-do (regulation). One thing became crystal clear as we started to approach the 21st century: decomplexification was needed with a general move away from centralized bureaucracy. It comes as no surprise that the old idiom cutting through red tape, which refers to circumventing bureaucratic procedures and dodging the paper fists, saw a concurrent surge of popularity in the early 2000s.

It is fascinating to note that arguably the three most widely read online dictionaries all give definitions for the word bureaucracy filled with negative connotations right off the bat:

As per the above, it becomes evident that nowadays bureaucracy implies something extremely centralized and inflexible, behemoth-like, filled with arbitrarily employed individuals (that most other people may not want to deal with in the first instance) who administer stringent rules for the purposes of keeping all other citizens under control. Naturally, the question that begs to be asked: How on earth did we manage to get here?

This is most peculiar. After all, do we need this sort of immobile monster today? And even more alarmingly, is that even what Weber had in mind when he offered his take on bureaucracy, or is it simply the case of an overworked phenomenon running amuck, a plough pulling an ox, as it were, things having bizarrely turned on its head?

The domain of economics reminds us of the famous rule of diminishing returns. A common example of this would be adding more workers to an assembly line but still not having factory’s output increase. Since workers will, sooner or later, start getting in each other’s way, the opposite effect will, in fact, ensue, ultimately decreasing the factory’s productivity. Likewise, adding more kilograms of paperwork and regulatory rigidity to the social routine is bound to eventually lead to poor results, and this has undoubtedly happened already.

It is inevitable that when institutions go through periods of steep vertical growth that we are observing right now, complexities associated with the functional makeup of these institutions also grow exponentially. Finally, these complexities grow to the point of:

a) being unmanageable through bureaucracy (as is the case in many countries in the West);

b) manifesting themselves through overt restrictions and bans (which is particularly pronounced in countries with official state regimes and/or religions, e.g. China, Turkey, UAE, etc).

Complexity theory, developed in the 1960s, postulates that every social and economic structure is a dynamic network which is constantly evolving and adapting itself to the forever changing external factors, often unbeknownst to its individual players on the inside who can remain oblivious to any alterations. What this also means is that every system’s output is not the sum total of the individual static entities in the system, but rather a sum total of their interactions, which are often impossible to foresee. In effect, what follows is that each system, at least to a certain extent, governs itself, whether we like to admit it or not, which goes hand in hand with Adam Smith’s famous invisible hand in economics first mentioned all the way back in 1759.

Friedrich von Hayek took it a step further years later and claimed that when governments got (overly) involved, it prevented the system from automatically adjusting itself, causing more harm than good.

Undeniably, this is not a prediction but a description of today’s world: the current system, including its many social safety nets (unemployment benefits, welfare, healthcare, etc) is already crumbling, because bureaucracy at its core can no longer cope with the weight of complexity on its shoulders. The big change is waiting to happen, and, for better or worse, the evolutionary wheels are already in motion as we speak.

Alternative at the Door

Bumbledom has no place left in the progressive world. A different system, a decentralized one, bureaucracy-free, or at least bureaucracy-minimal, should be considered before we get too far gone. As of right now, there is a system that may live up to this mammoth of a task and add to the creation of a global system of “governance” that does not depend on any one government. This system, as far as the business world goes, is already here, and it’s called the Blockchain. Notably, it does not rely on a God-like political or economic entity to manage its daily running; instead, it relies on transparent self-governance and confirmability of transactional facts by members of its community at large.

It is important to understand that when the Blockchain was being introduced, it wasn’t just a financial solution but an instrument of social and political change. Certainly, the private business sector swiftly followed to profit, but at the backbone of this model today still lies the embedded need for a deeper change, the need for overall socio-economic liberty.

When considering a decentralized alternative, it is equally crucial to understand that no one is talking about disorder or violent anarchy: decentralization does not necessarily mean that at all.

The process of decentralization in Iceland, albeit still incomplete, is a prime example of it. People are perfectly capable of maintaining their society without a direct involvement from government simply by the virtue of mutual trust, wherein the word trustless takes on the new Blockchain-related meaning of “no longer requiring trust” since everything is barrier-free, translucent, and corroboratable by everyone involved.

Battle of the Wills

With this type of technology available, why do many of us still cling to the obviously outdated format of centralized social organization and centralized platforms? It seems odd. Is it because it’s safer? But it resoundingly isn’t: just look at the multiple scandals to do with privacy violation claims surrounding Google and Facebook. Is it because it’s more familiar? Well yes, it is, naturally. But true progress does come at the cost of leaving your comfort zone. Besides, the truth be told, the Blockchain has by now already become the comfort zone of many. So, this sort of excuse won’t suffice.

According to the futurist Max Borders, who worries about an upcoming imminent struggle between “central hierarchies and prosocial networks”, there’s going to be a trust race between the trustless leviathans of the FAGMA type (Facebook, Apple, Google, Microsoft, and Amazon), who demand loyalty and trust but no longer invariably receive it, and the decentralized, trustless platforms pushed forth by the Vitaliks of the world, which by their very nature do not require trust. Many, including Max, root for Vitaliks and hope that the former group comprised of the giants will lose to the latter group comprised of the up-and-coming cyber minds of the modern age.

Global Perspective: The Future is Now

When looked at globally, the basis behind the Blockchain technology forms a welcoming environment for the development of a completely new type of digital economy. The role of intermediaries in this regime comes down not so much to reselling goods and services, but rather to ensuring that there is a successful communication between the seller and the buyer, says Blockchain entrepreneur and investor Alexander Petrov. In other words, more than anything else, middlemen in this scenario are working towards reinforcing a direct exchange between the two interested parties that transact business.

It is apparent that modern interfaces will soon enough altogether replace those individuals who sell; in contrast, those who analyse markets will be in yet higher demand. Professionals like accountants may want to think about changing their line of duty: in the very near future, their labor is bound to be replaced by services run from the web making their occupation obsolete.

Naturally, economies of the future based on direct exchanges of assets and information between people will require a heightened level of financial competence. Every person will have in their possession digital tokens, and they will have to learn to continuously guard and grow their wealth.

This is the reason financial consultants and traders will absolutely prosper in this new world. And it goes without saying that IT programmers and developers, the very architects of digital reality, will do extremely well under these new market conditions. Evidently, they are doing well already.

Related
From Thinking Like a Regulator to Pulling Off a Crypto Heist: StartEngine Summit Opens LA Blockchain Week

Newly developing trustless networks, in the new sense of the word, like the algorithm-based “UCommunity”, which models its social paradigm on the Blockchain’s building blocks principle, is one of the few platforms already leading this innovative change today. A freshly emerging web-based social structure is currently in the making: with its doors wide open, it extends its eager digital hand to future members, those willing to think outside the box.