Africa’s Blockchain Potential Limitless But Its Implementation the True Struggle

Darryn Pollock
Africa has long been heralded as a gateway for Blockchain technology with all its potential, but the implementation is particularly difficult 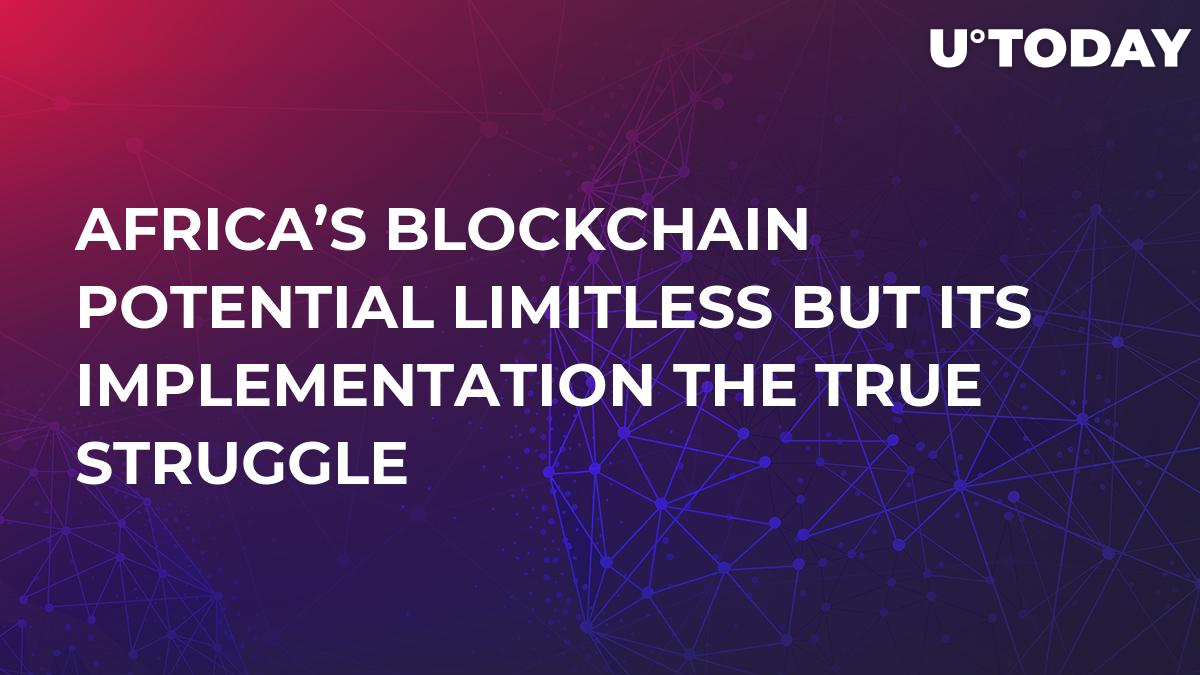 Cryptocurrencies were born out of the crisis. It was Bitcoin that came into being in the wake of the 2008 banking crisis as a way for individuals to free themselves of the tyranny of the institutionalized financial system.

The financial struggles seen predominantly across the west are at least wavering, but in Africa, the construct that has been created by a colonial past has propped up a financial system that is not purpose-built for the continent. For that reason, a new financial system, such as one based on Blockchain, is an enticing prospect.

One issue that could slow down the adoption of cryptocurrencies and Blockchain across the first world is the institutionalized systems already in place. Things like Bitcoin burst onto the scene with a bullish attitude that they could replace banks and other financial institutions, as well as regulators. However, as time has gone on it has been clear that the entrenched system is far too strong to be shifted by one technology, no matter how decentralized it is.

However, in Africa, the foundation that banks and regulators have been built upon is inherently shaky. Regulators are corrupt and self-gratifying while the banks are also not the basis of money with such a large population happily being unbanked.

This is where the main root of cryptocurrency adoption is in Africa, the fact that banks are difficult and centralized to reach for a population that lacks solid transport and is predominantly rural.

Cryptocurrencies offer people access to their money with more ease than a traditional bank, as well as the fact that traditional banking rules and fees are often insurmountable for some of the world’s poorest people.

In terms of technology advancements, Blockchain also offers a new building block for Africa. Things like supply chain, elections, charity organizations and a number other sectors plagued by corruption can benefit from a lack of centralized control and a transparent nature.

“Governments can choose to be in a race to be the most restrictive, or alternatively to be the most embracing and innovating when it comes to Blockchain technology,” Neil Blazevic, founder of Africa Digital Assets, explains.

Many African countries suffer from instability and poor financial and physical infrastructure. Blockchain, with its exchanges secured by cryptography, thrives in such environments.

“The best uses for Blockchain are seen where many parties from different sectors lack trust or have different interests as it can reduce corruption, increase transparency, automate accounting and improve processing times,” says Blazevic.

The difficulties of getting going

But, despite all the possibility and potential, there is a number of major handbrakes which are slowing, if not crippling totally, the ability for Blockchain to reach its potential. From the outset, Blockchain technology is an advanced digital technology; however, most of Africa’s population lives rurally with little access even to the Internet.

And, by being one step behind, where people are still seeing the Internet as new, Africa will have difficulty understanding Blockchain.

Naomi Snyman, Blockchain Lead at Standard Bank in South Africa, explains just how Blockchain is like the Internet was a few decades or so ago.

“If we think about how the Internet started, we didn’t understand why we needed it or how it even works. But it has completely revolutionized our lives. The same counts for Blockchain,” Snyman said.

Another big barrier to entry, which is the case across the globe, is regulation. There is a strong sense of power and privilege in governmental positions in Africa, and to that end, a system that is disintermediated like Blockchain is not very appealing to that power structure.

“In this world, you have to make peace with the fact that you will be disintermediated, your way of making money now and operating will be disrupted because we are in a space where everything is being decentralized. Blockchain basically is a piece of technology that allows users to interact directly with one another through nodes instead of through a central party. Creating new networks and platforms are definitely the biggest benefits of this technology. The spirit of Blockchain is collaboration.”

On paper, there is very little denying that Africa can benefit from the pure integrity of what Blockchain can bring. However, the continent sits on a tipping point where it can either wait and fall behind the rest of the globe again, seeing how they handle this new technology, or they can take the lead and leapfrog ahead.

Africa has been baying for a system which it can shape and built on its own without being beholden to former colonizers or other systems, and Blockchain can be such a system, but it needs to be more than another copy-job, it needs to be a truly African solution.