What Happened in September in the Cryptoverse?: Global Overview and Regulatory Headlines

Darryn Pollock
September showed a lot of intriguing developments in the city space with regards to global changes and regulatory movements. 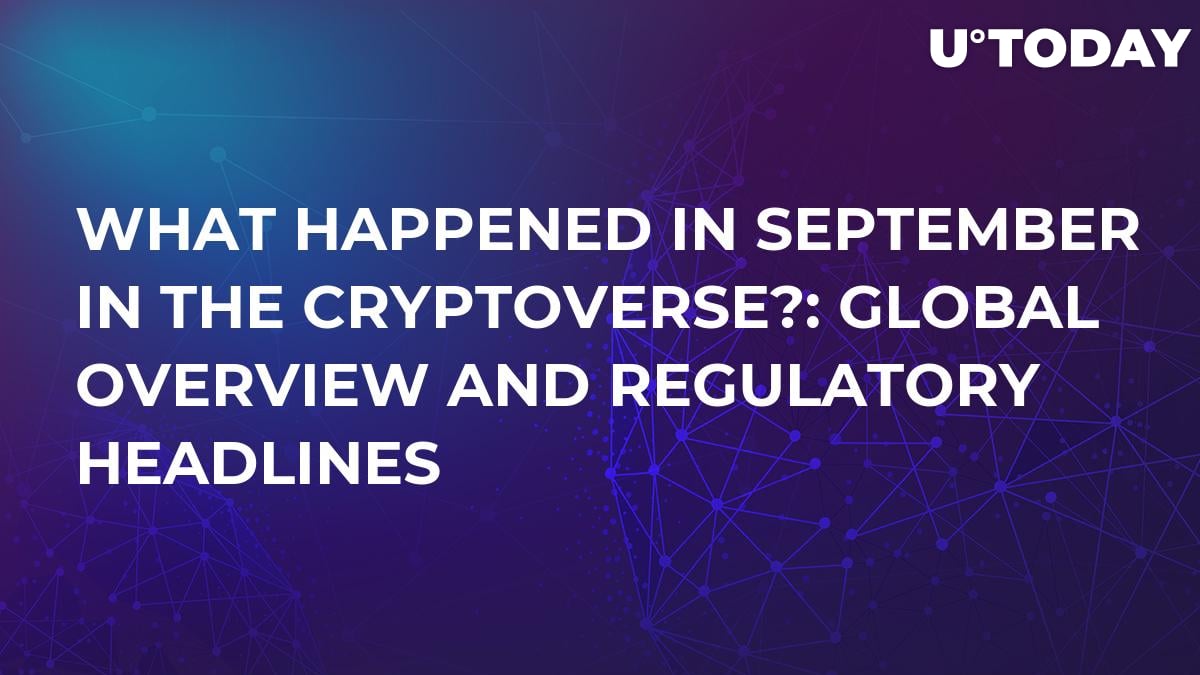 September saw a few major occurrences across the Cryptocurrency universe in terms of its global impact and overview, as well as in regards to regulatory headlines. But September will probably be remembered as the month after the SEC denied a couple of ETF applications and kept the rest of the ecosystem on tenterhooks with regards to this product.

For this reason, September was a bearish month with Bitcoin’s price dropping substantially in the early parts of the month, and even Ethereum hitting a new low for 2018. However, there were some positives in other countries has Iran accepted cryptocurrency mining as a legitimate industry and the Winklevoss twins launched the Gemini Dollar.

Starting with a crash

On Sept. 5, after Bitcoin had recovered from the news of delayed and denied ETFs, the cryptocurrency market suddenly and rapidly plummeted. It was unknown as to what catalyzed this downturn, but there were a few theories thrown about.

At first, it was believed that Goldman Sachs’ decision about rolling back a trading desk affected the markets, as reported by multiple headlines. However, that was more an issue of coincidental timing as the Wall Street bank even denied their influence would have such an effect.

The lows emanating from this crash went into effect Ethereum hard. The second largest digital currency by market cap was overtaken twice by XRP as its price dropped substantially. Ethereum’s loss in terms of price was attributed to the bearish market as ICOs on the Blockchain decided to sell off their assets to stem the bleed.

There were a few positives across the globe for cryptocurrencies, such as in Iran, a country looking to build its own cryptocurrency to avoid sanctions. The Iranian government decided that cryptocurrency mining would be a legitimate industry in the middle east.

Additionally, India, a country with a chequered past when it comes to cryptocurrencies, decided to send officials to the US, Japan and Switzerland in order to study cryptocurrencies and ICOs further. This comes after India banned businesses using cryptocurrencies without out much more thorough research earlier in the year.

South Korea was also in the news in a positive way for Blockchain as the government started up a partnership with the aim to train over 40 Blockchain professionals. South Korea’s relationship with cryptocurrency has gone through a lot this year and while it is stringent in its regulation, it is also forward thinking for its potential.

Tezos was also back in the news after it had a massive breakdown following its ICO when the heads of the Blockchain company began infighting, threatening to scupper the entire operation. However, in September, they finally announced that the mainnet of their program was launched.

While the SEC did not make too many big steps in its approach to a Bitcoin-based ETF following decisions in July and August, it did seek further clarity and comment on VanEck’s ETF, a product which is being well regarded as a potential success with the SEC.

However, the SEC did also suspend trading of two crypto-based securities. Citing “confusion” among investors, the SEC issued a notice that these two ETNs — Bitcoin Tracker One (“CXBTF”) and Ether Tracker One (“CETHF”) — would cease trading until September 20.

Keeping in line with regulators though, the Winklevoss twins bounced back from their denial of an ETF by launching the Gemini Dollar. This was touted as a fully regulated and compliant ‘stablecoin’ which is pegged to the US dollar.

The Gemini dollar also piqued some interesting chatter across Telegram with Sept. 10 seeing a spike in interest for this event. On that date and the following day, Gemini Dollar talk matched about four percent of talk about Bitcoin across Telegram, and its ripples were felt through until Sept. 21.

Tezos also saw a lot of chatter across Telegram in September as its mainnet launch approached. On Sept. 15, 18, and 21, the talk of Tezos reached between 7 and 12 percent of all talk of Bitcoin across the messaging app.

Tron is a project that a lot of people have been keeping their eye on as the long and complicated process keeps unwinding and making more and more strides. A big advancement for Tron, just heading into September, was the launch of its Tron Virtual Machine which it touted as a new chapter for the dApp ecosystem.

In terms of the Blockchain space and the major cryptocurrencies, there was a definite and obvious game of hunting and following that took place right near the summit of the market cap. Ethereum had a very poor September and lost a lot of its price gains in its new 2018 low.

As Ethereum slunk away in terms of its price, it also lost a lot of its market dominance, and respectively, it lost its second-spot to Ripple on a few occasions. Ripple announced its own xRapid program and because of that saw some good gains even over a bearish month.