Joseph Young
G20 Summit has agreed not to impose additional regulations on the global cryptocurrency market, as it does not view it as a threat to financial stability 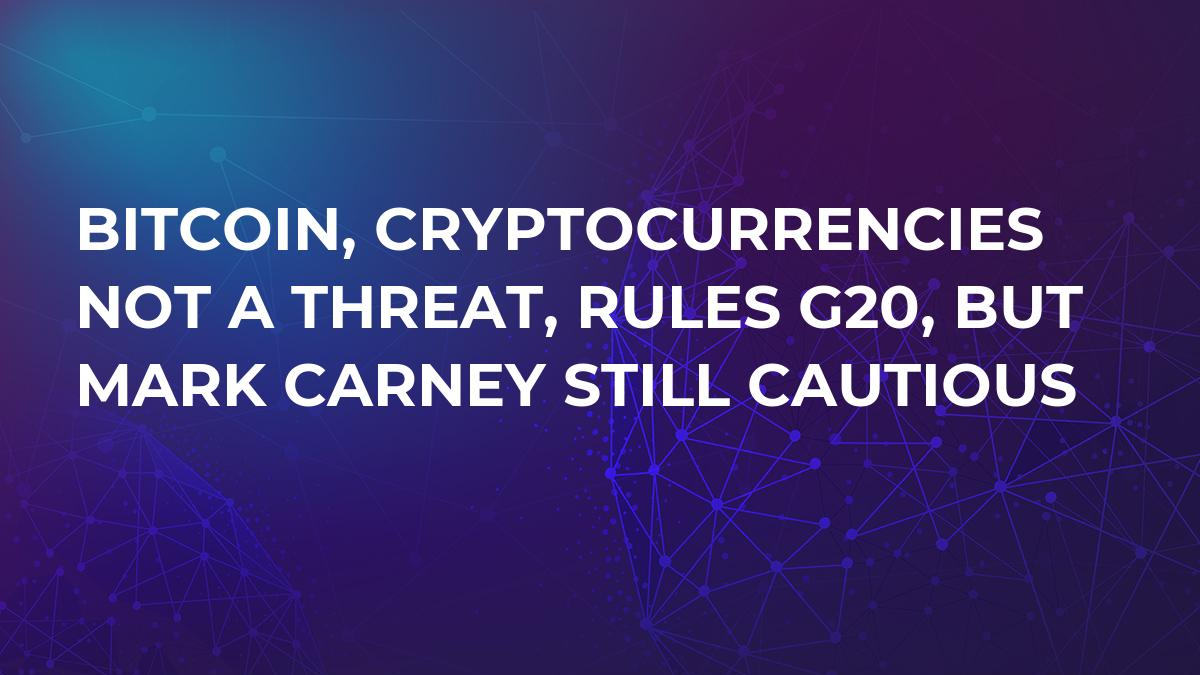 G20, an international forum for the governments and central bank governors from 20 major economies, has decided not to impose additional regulations or restrictions on the global cryptocurrency market.

The Financial Stability Board (FSB), a global financial watchdog led by chair Mark Carney, the Governor of Bank of England, released a statement citing the letter of Carney stating that cryptocurrencies like Bitcoin are not a threat to the global financial system, with an emphasis on the lack of necessity in adding strict regulations for the cryptocurrency market.

“The FSB’s initial assessment is that crypto-assets do not pose risks to global financial stability at this time. The market continues to evolve rapidly, however, and this initial assessment could change if crypto-assets were to become significantly more widely used or interconnected with the core of the regulated financial system. For example, wider use and greater interconnectedness could, if it occurred without material improvements in conduct, market integrity and cyber resilience, pose financial stability risks through confidence effects,” the report of FSB read.

But, the personal letter of Carney submitted to the G20 summit noted that cryptocurrencies could have a negative impact on the global financial system if the market grows without significant improvements in market integrity and cyber resilience.

“Wider use and greater interconnectedness could, if it occurred without material improvements in conduct, market integrity and cyber resilience, pose financial stability risks through confidence effects.”

In essence, Carney, FSB, and participants of the G20 Summit believe that existing regulations on the cryptocurrency market, which are relatively strict in leading markets like the US and Japan, are sufficient to prevent money laundering and illicit operations given the Know Your Customer (KYC) and Anti-Money Laundering (AML) systems employed by licensed cryptocurrency exchanges.

However, Carney explained that if market integrity and cyber resilience are damaged in the long-term through large-scale hacking attacks as seen in the case of Coincheck, cryptocurrencies could pose a threat to the global financial system and the industry will need to be regulated in a more strict manner.

As of current, the global cryptocurrency market has not had a profoundly negative impact on the global financial system, given that large-scale security breaches have been resolved through corporate funds and the liquidity of cryptocurrencies has continued to increase over the past few years.

The letter released by Carney demonstrated a rather conservative and cautious tone, in comparison to the statements Carney had made in the past.

Earlier this year Carney requested governments to strengthen regulations on cryptocurrency trading to terminate the era of “cryptocurrency anarchy.”

Strong efforts to restrict the cryptocurrency market, which has already evolved into a $300 bln industry, would lead to global financial instability, which defies the interest of Carney, the Bank of England, FSB and G20.

It would be more beneficial for leading economies and governments to embrace the cryptocurrency market and utilize existing regulations to better facilitate the increasing demand for cryptocurrencies, which have evolved into a newly emerging asset class.

Already, in the US and Japan, two of the largest cryptocurrency markets, cryptocurrency exchanges have received licenses to operate as financial institutions.

In Japan, the government has introduced a licensing program for local trading platforms to ensure that each exchange is compliant with KYC, AML, and other financial policies.