Joseph Young
???According to Anthony Pompliano, the Bitcoin bear market has been proven to be much more attractive for institutional investors. 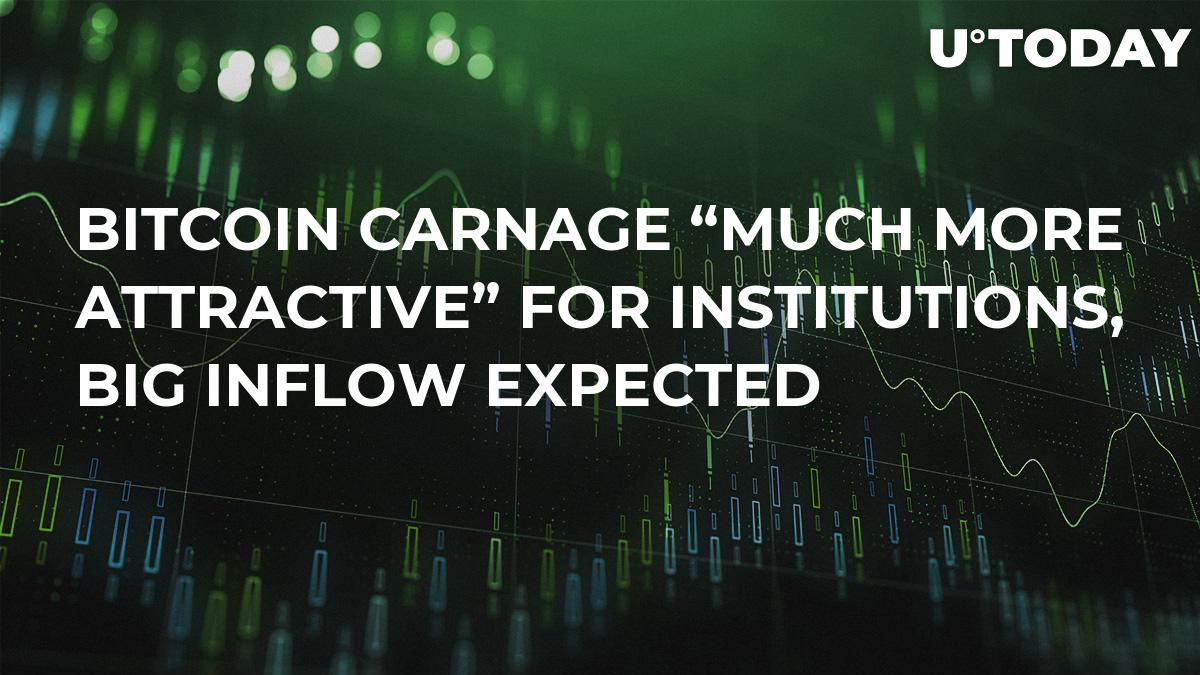 Throughout the 15-month bear market during which the Bitcoin price plunged by over 80 percent against the U.S. dollar, the Bitcoin market has seen a high inflow of capital from both institutional and retail investors.

Anthony Pompliano, the founder and partner at Morgan Creek Digital who led the entrance of the first two public U.S. pension funds into the cryptocurrency market, said that the Bitcoin bear market has been “much more attractive for institutions.”

Pension funds are going to pour into crypto. The non-correlated, asymmetric return profile of the asset is the exact solution that they need to save them from their underfunded status.

The pace of institutionalization in the Bitcoin market in a period of 10 years since its inception in 2009 has been relatively slow.

However, in the past three months, the cryptocurrency market has arguably seen more progress in institutionalization than in the past eight years from 2009 to 2017.

While only two U.S. public pension funds have invested in the cryptocurrency sector to date, an annual report from Grayscale, a subsidiary of Digital Currency Group, disclosed that more than $250 million were invested by institutions throughout 2018.

The report, which revealed that $359 million were invested in crypto through Grayscale, read:

We saw that retirement accounts comprised a higher percentage of total demand for Grayscale products in the fourth quarter (40%), while institutional investors continued to be the dominant source of inflows for 2018 (66%). 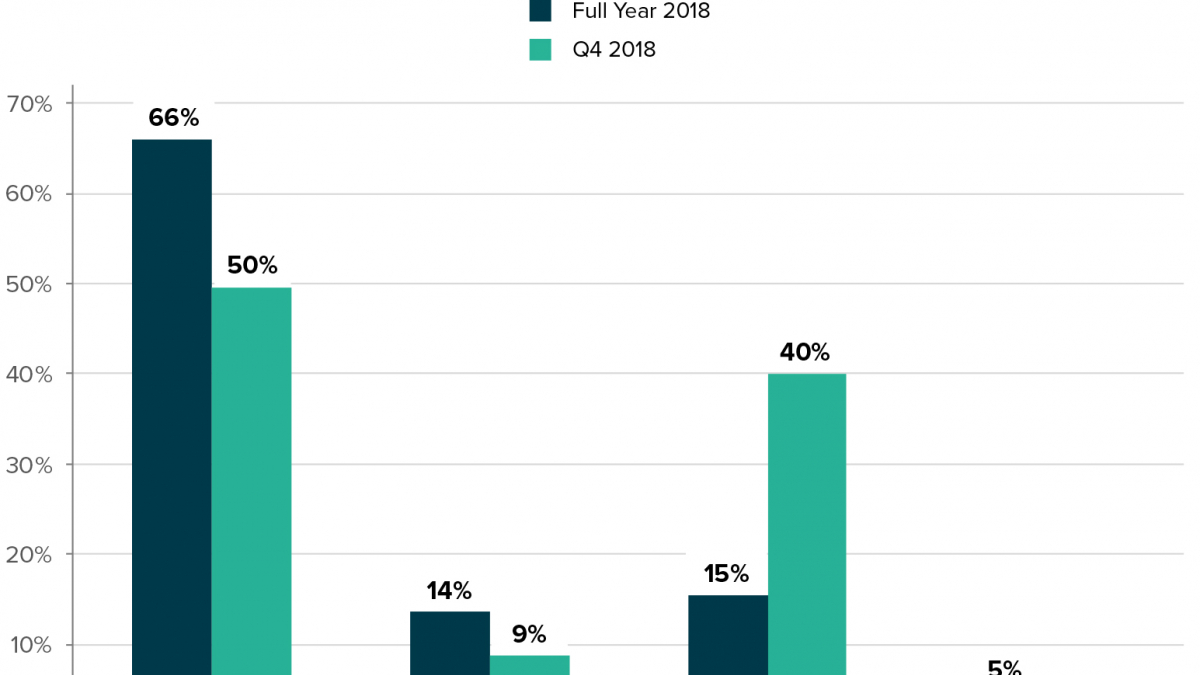 As said by Pompliano, it is entirely possible that the substantial decline in the prices of cryptocurrencies triggered by the 80 percent plunge in the Bitcoin price led investors, particularly institutions, to become more interested in the asset class.

Prior to the 2018 bear market, many blockchain projects and tokens were valued at billions of dollars. Even projects without live products or working prototypes were able to secure billion dollar market caps due to the rising speculation in the market.

In 15 months, the valuation of the cryptocurrency market has dropped by around 85 percent with tokens and small market cap assets recording gains in the range of 95 to 99 percent. 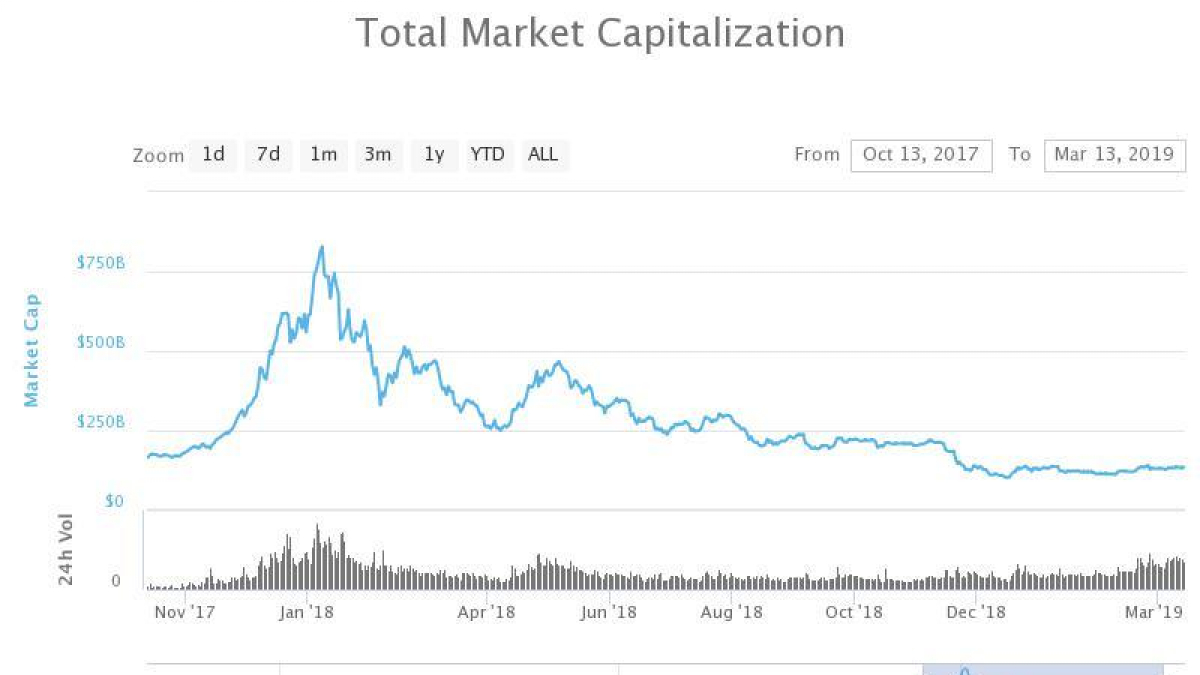 Caption: 17-Month Chart of the Valuation of the Cryptocurrency Market (Source: Coinmarketcap.com)

The bear market has left investors with more attractive and justifiable investment opportunities in a lower price range and a solid platform for investors who felt they had missed out during the 2017 bull market.

Hundreds of millions of dollars are estimated to have been invested by institutional investors in the U.S. alone in the past 12 months.

In comparison to the volume of the global cryptocurrency exchange market, the estimated $300 million figure is comparatively small.

But, as billionaire investor Mike Novogratz said, it is a solid foundation for other institutional investors to dive into the cryptocurrency market and in the mid-term it could lead more institutions to invest in the market.

What is going to happen is, one of these intrepid pension funds, somebody who is a market leader, is going to say, you know what? We’ve got custody, Goldman Sachs is involved, Bloomberg has an index I can track my performance against, and they’re going to buy. And all of the sudden, the second guy buys. The same FOMO that you saw in retail [will be demonstrated by institutional investors],” he said.

There’s a world in need of saving. What kind of people would we be if we let a little bear market get in the way of that? https://t.co/lJUo1bFuHr

The emergence of major financial institutions in the likes of Fidelity, ICE, and Bakkt has further fueled the confidence of institutions in the U.S. market and most importantly, has served as evidence that cryptocurrencies as an asset class is not a fad.