Altcoins Grow With Litecoin, Ripple and EOS Leading the Race; Bitcoin Lags Behind

Dmitry Cake
Bitcoin’s lateral movement gives chance for altcoins to show themselves. LTC and XRP are on rise, EOS surges. 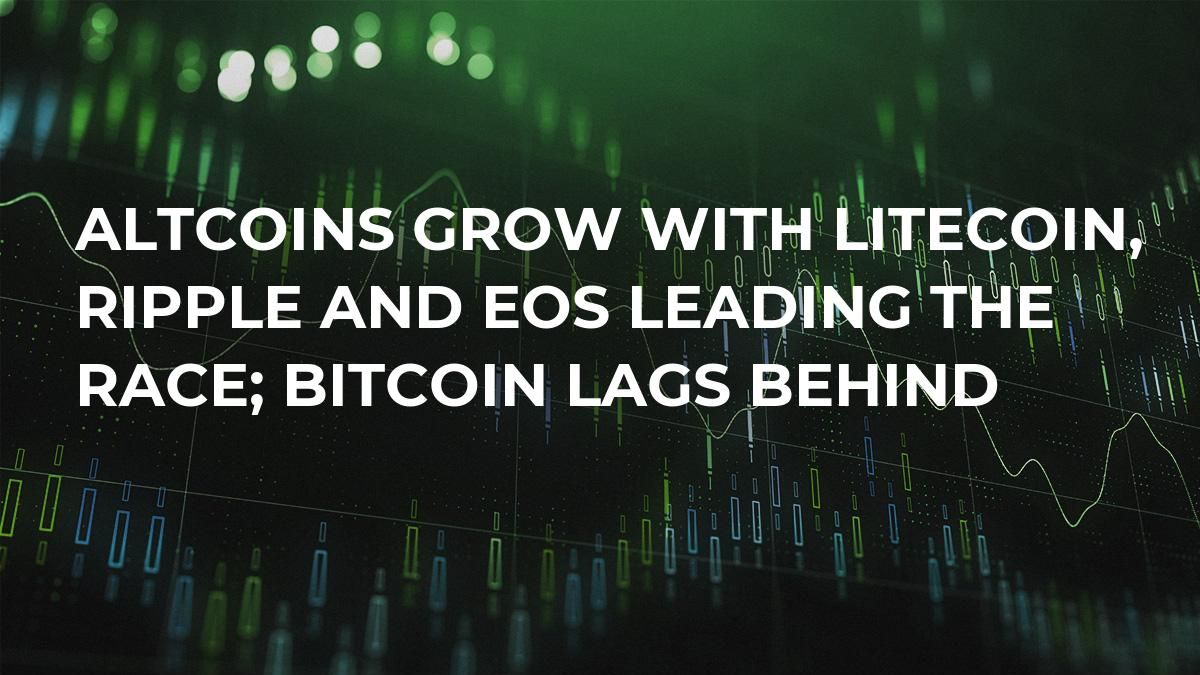 While the first half of Wednesday was filled with doubt and caution, by the end of the day there was a breakthrough, all positions were in the green, trading volumes increased many-fold and the market was filled with euphoria again.

This time, Bitcoin was not the catalyst- its price practically hasn’t changed since yesterday. In our opinion, this was how tension in the minds of investors was released- through the fear of losing profit, as altcoins seemed to reach bottom and had no plans to fall further.

As a result of the efforts of active buyers, capitalization increased by $12 bln and is now $277 bln, while Bitcoin dominance plummeted to 42.7 percent, continuing the trend and confirming yesterday's conclusions. For a little while, the lateral movement of the main asset allowed altcoins to spread their wings.

Another airdrop boosts a coin’s price

Former unity is gone from the top 10- the coins are growing without any regard for their neighbors.

Today’s absolute leader is EOS, growing by 50 percent- an incredible feat for a top asset! This growth was sponsored by the news about the upcoming airdrop of eosDAC tokens for all EOS holders with the support of the large Korean exchange Upbit.

Notably, the trading volumes of EOS in Korea are especially high, comprising nearly half of the global amount.

In second place at today’s rally is NEO, with a gain of 10.5 percent, followed by Cardano with 8.5 percent, and Ripple - somewhat unexpectedly-  in fourth place with seven percent. The remaining assets show more moderate growth of four to six percent. Bitcoin is the outsider today- an increase of 1.5 percent is laughable compared to the success of other coins.

In the previous review, we predicted a lateral movement for Bitcoin on Wednesday, with highs around $7,000-$7,150, and we were right.

Our attention was caught by a figure that does not appear in textbooks on technical analysis, but clearly has some power over the price - let's call it the "fish head." It seems that the situation should be resolved in the course of today, more specifically- in its second half.

Given the proximity of the $7,000-$7,150 range, which is a resistance in view of the presence of mirror levels, as well as the strong 0.5 and 0.618 Fibonacci expansion values, a false break through the figure is possible. Although considering the bullish sentiment in the market, the fallback is unlikely to be significant. For now, most indicators are suggesting that Bitcoin will move upward, but we can’t forget about the treachery of bears who have interrupted growth more than once before.

If buyers manage to overcome gravity and break out of the lateral trade, today we may see a test of the boundary of the long-term ascending channel, and then a sprint toward $7,500 where another resistance awaits. In case of a negative scenario (we are watching for the break of the figure!), the fall to previously indicated targets remains in force, although it becomes less likely given buyer excitement.

For almost three weeks, EOS was resting at the level of $6, preparing, as it turned out, for explosive growth. The surge was only slowed down by the mirror level at $9.2. Three more days remain until the airdrop, so we are likely to see another upward sprint.

In the context of the current situation, it’s not quite accurate to discuss bull targets - the ongoing events are more like panic purchases, rather than cold calculation and purposeful actions.

However, the set of supports and resistances hasn’t gone anywhere. At the moment, we see the maximum price in the range of $10-$10.5, which is constrained by the mirror level on one side, and the 2.618 Fibonacci expansion on the other. The next growth spurt will be difficult to implement without a small fallback. With a high degree of probability, EOS will make a recovery stop in the region of $8.

It’s difficult to predict how much the price of EOS will fall after the conclusion of the airdrop- it all depends on the state of the market on Sunday. It’s possible that those $8 will become the fair price for the asset for a period of time. In any case, we recommend that EOS investors remain cautious and closely follow the events on Sunday. It is advisable to set stop-loss orders at just below $8, or partially book profit upon reaching $10.

Yesterday, Ripple returned to the ranks of assets that draw the interest of investors- this is indicated by the significant initial purchase volume. The last time when we saw such activity was in early March.

As a result, XRP almost reached the level of $0.56, where the 0.382 Fibonacci retracement value is located.

The nearest growth target, with multiple confirmations, is $0.59, followed by $0.62. No descending channels are pressing down on the price anymore, so everything depends only on the zeal of bulls and the love of investors. The worst is over for Ripple, since the critical support level ($0.45) has been left far below. Cautious purchases will not be in conflict with common sense.

Once again, many parallels can be drawn between the graphs of Litecoin and Ripple, so we will keep this brief. We also see a surge in buyer activity, confirming that despite all adversity, Litecoin cannot be completely discounted.

In case of continued ascending movement, the main task of the bulls will be breaking through the boundary of the descending channel and the “cementing” of the $120 level, after which they can try for $130-$132.  Protection is provided by the support zone in the narrow range of $109-$112. It will hold up in any scenario, except that of Bitcoin traveling towards $6,000. Despite the enlivening in Litecoin trading, we still recommend that readers avoid active purchases and direct their attention to other assets.