What Will it Take to Make Bitcoin a Dominant Alternative Currency?

Darryn Pollock
There are some firm believers that Bitcoin can become a dominant alternative currency, but many also believe it is a tool for market speculators 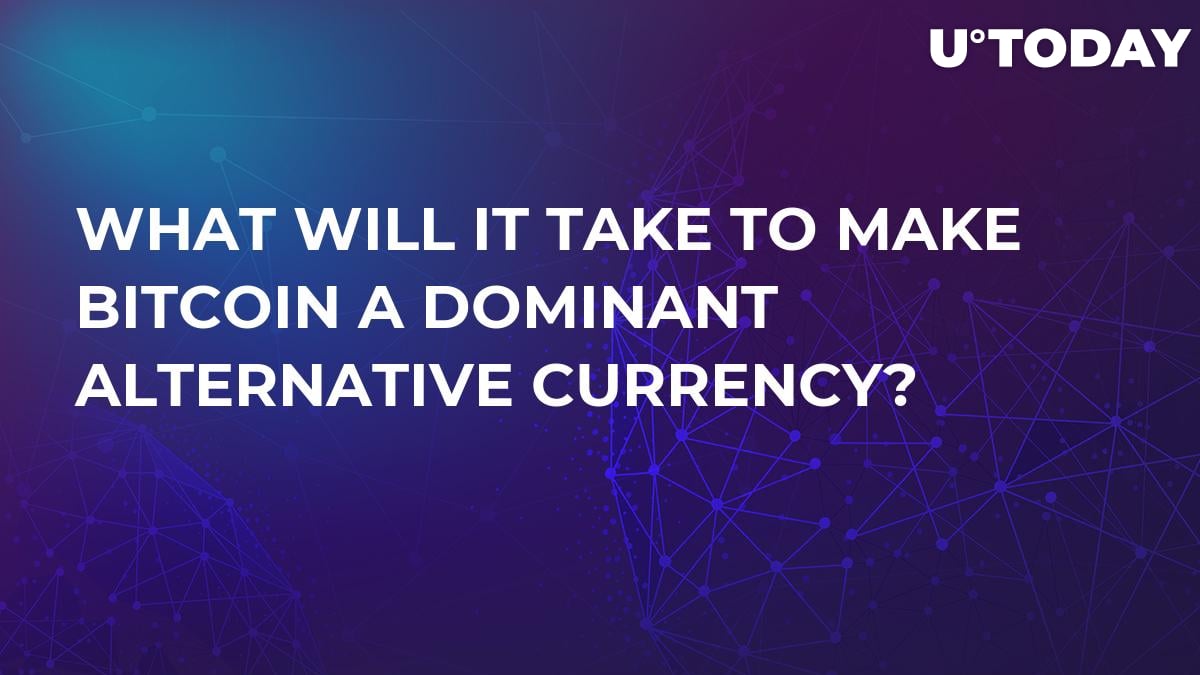 Bitcoin has gone through many phases since its inception almost 10 years ago exactly this month. It was born of the 2008 financial crisis, intended to be a libertarian way to free oneself from the traditional banking sector, but as it has evolved, it has moved its goal posts a number of times.

From a pure currency, mostly of the dark web, to an ever increasing asset seen as digital gold, Bitcoin’s designation is still up for debate, but there is no doubting that it could be an alternative currency. Although, the problem with that is which side of the fence one stands on.

Some see Bitcoin as the unwanted additive to Blockchain, while others still believe it is the answer to a constrained economic system — then there are those who think the whole system is a waste of time.

Still, there is little doubting that the potential is there for Bitcoin to make a charge as an alternative currency, especially in the digital age, but it just needs a few things to go its way.

It begins with demand

Part of Bitcoin’s problems in 2018 has been around a lack of trading volume, which in terms indicates a lack of interest or demand for the digital currency. At its peak, and when demand was at its highest, Bitcoin was considered much more of an asset than a working currency and people were scrambling for it.

But, its demand as a currency is far less, and there are a number of reasons for that. What is actually needed is another economic crisis to reinforce the idea that fiat currencies are flawed and centralized governments can damage economies.

Data shows that 50 percent of the world’s population lives in one of 98 countries that have had at least one year in the past 10 when inflation was above 10 percent. It is an interesting statistic as this poor economic performance should be driving people to look for an alternative, but it is not strong enough yet.

With Bitcoin only being 10 years old as of Oct. 31, it is still quite embryonic and has a lot of teething problems that need to be sorted out, despite what many minimalists believe.

One of the double-edged swords of Bitcoin is its volatility. It is something that made it famous and helped it reach a big swath of the population, but for it to be a real contender as a currency, there needs to be more stability.

It is the Bitcoin futures that were put into play in December last year from CBOE and CME that are helping with this. These options offer short selling of the digital currency, which is essential to reducing volatility over the long term.

Scaling and capacity of the Bitcoin network have been a long and ongoing issue for the digital currency. It is often noted that the network processes only seven transactions a second, while the Visa network, for instance, does about 65,000.

However, this is something that is being worked upon, and there is an option to scale which could help, such as the Lightning network, and even alternative currencies aimed at being faster.

The Blockchain network of Bitcoin has remained unshakeable and is at present unhackable; however, the security around exchanges and other services that offer Bitcoin and Blockchain access need to be sorted.

This is being looked into a lot more recently as a lot of governments, especially of Japan and South Korea, are stepping into making these businesses more secure.

Bitcoin and other cryptocurrencies, as well as the underlying Blockchain, have reached a point with regulators where they are mostly accepted and allowed to operate. However, the framework in which they can operate remains very cloudy.

It is no longer the case that cryptocurrencies and their related businesses do not want regulator intervention, it is that they are seeking it in order to gain firm guidelines and areas of operation.