Cyril Gilson
In an exclusive interview, UK-based think tank Re-Define’s Linda Zeilina talks about the prevalence of groupthink, the lack of diversity and limitations of Blockchain 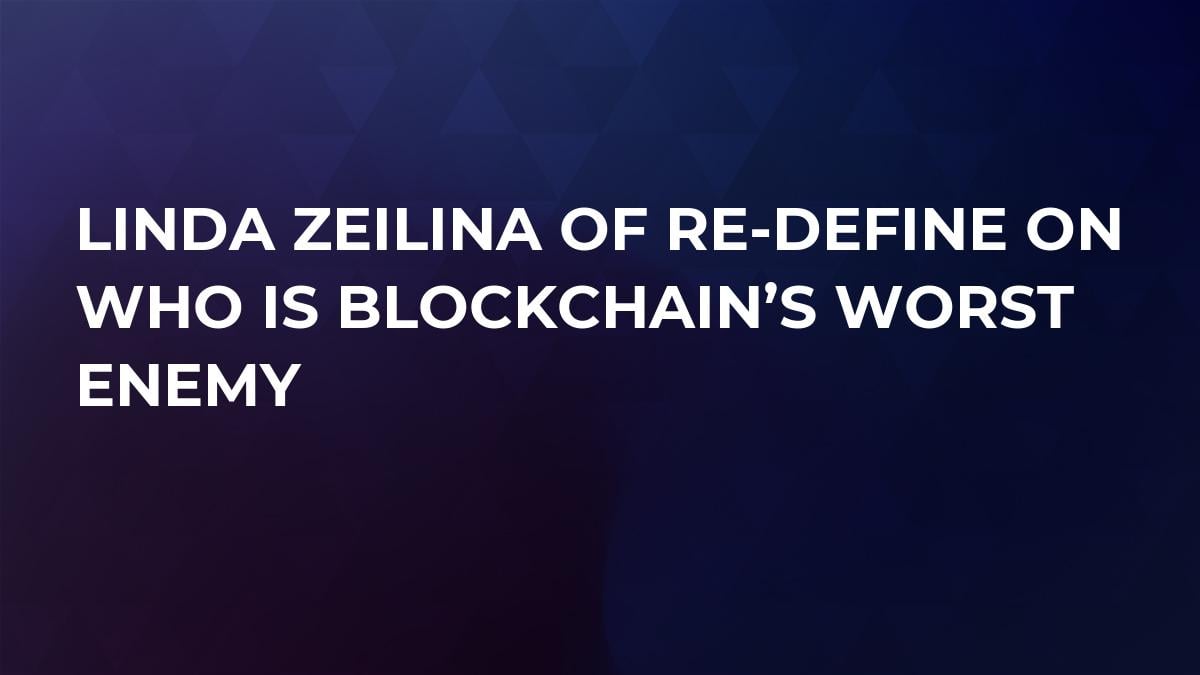 As governments and financial institutions grapple with the task of regulating digital currencies, they seem to be embracing Blockchain, the underlying digital ledger technology which powers the world’s most profitable cryptocurrency Bitcoin.

UK-based think tank Re-Define’s Linda Zeilina special advisor on sustainability strategies talks about the prevalence of groupthink, the lack of diversity and limitations of Blockchain in an interview with Cyril Gilson, Editor-in-Chief of CryptoComes.

Cyril Gilson: Could you tell me about your think tank and your audience?

Linda Zeilina: I work with Re-Define, an international think tank that helps corporations and governments implement sustainability strategies to become more environmentally friendly. I work with asset managers and government officials to integrate Environmental, Social and Governance (ESG) factors into their institutions.

Re-Define operates as an academic and consulting body.  We have visiting fellows and a large team of people who work internationally. Our visiting fellow’s program brings together tech pioneers from France, Silicon Valley and other parts of our world to serve as a brain trust. We challenge people to think outside of the box and invite a diversity of opinion.

In the tech industry, there is a strong tendency to have “groupthink.” Tech entrepreneurs passionately believe in their product this mindset sometimes results in overlooking issues and blind spots.

CG: So would you agree that the biggest enemy of the crypto community is the community itself?

LZ: We are all our own worst enemies to an extent. But I think diversity can bring new perspectives to the industry. Corporations are increasing diversity because they have woken up to the fact that women, minorities, people from different regions have a different way of looking at things. Alternative perspectives can be useful to identify opportunities and risks that one may have missed because of a sharp focus in one’s particular area.

CG: How do we change the dialogue? We hear many negative things about cryptocurrencies and comments that Bitcoin is a bubble. It makes people in the industry very defensive.

LZ: Educating the public is essential. The crypto community has been using a top-heavy approach which may not work as well as bottom-up approaches. When you get people involved, you put pressure on governments. It’s been pressure from bottom up that has influenced governments to address climate change. People suffering from direct implications of climate change are going out there, talking about it and bringing attention to the issue. Similarly, you have to think about digital currency as an advocacy and information campaign.

The issues that fire up

CG: But addressing climate change is a matter of life and death while adopting digital currencies is a question of paying a seven or three percent fee. Do you think it’s an issue that will fire people up?

LZ: People can be mobilized;  it’s how you communicate to the public. If you explain to them that healthcare will be cheaper, taxes won’t be as complicated, and they can be more secure from identity theft; then you can fire people up.  People like convenience, the rise of Amazon has been about making things quick and easy. Who doesn’t like quick and easy?

CG: Debates in cryptocurrency community get quite heated. Do you think the community could improve the way in which they communicate?

LZ: Definitely.  Communication is everything.  In a way, this is how technological advancement has always worked. Something gets invented, and then others improve it, and everyone has an opinion. I think that the community needs to solve its own issues because they are the best equipped to address them.  People remain protective because everyone wants to maintain their competitive edge.

CG: What about the role of governance in Blockchain technology?

LZ: Everybody hopes that governance will change the status quo, but there are inherent limitations. We have examples of failed projects due to lack of underlying infrastructure, like Honduras.  Without decent governance, accurate record keeping, Blockchain may not work.  In some cases, governments can corrupt the system. The whole 51 percent aspect of the nodes is something no one seems to be talking about, and we have heard very little about the weaknesses of Blockchain.

CG: So what are the weaknesses of Blockchain?

LZ: Well there are several. It is the 51 percent that can change the Blockchain outcome. If you do have a government that creates a land registry, but it’s an unequal society where not everybody will have the computing power or the ability to participate, Blockchain may not work. Moreover, stakeholders can use the technology to protect their interests.

Another major challenge is the amount of energy consumed by Blockchain. If Bitcoin used nearly 160 countries worth of power last year, that is hardly sustainable under the Paris Agreement, and people are not going to be happy.

CG: That’s their algorithm, and it cannot be changed.

LZ: Exactly! We need to invest more in green energy. The majority of Blockchain businesses will probably fail. But I have a firm belief these limitations can be solved through technological advancements in all areas.

CG: Do you think women are under-represented in this community?

LZ: Absolutely.  I also find it kind of funny because women are associated with the softer issues. Every time you go into a crypto conference people always start talking about the technical aspects.  Everybody knows how the technical aspects work; it’s far more interesting to see how the technology will interact with society and what the potential backlash might be.

CG: Have gender differences played a role in the advancement of agendas because men are about achievement, advancing their agenda and women care more about society?

Learn from the East

CG: Do you expect a greater advancement in the use of Blockchain technologies in developed countries or emerging economies?

LZ:  While much of the brain trust exists in the US and Switzerland, it’s important for institutional investors to know that there are real opportunities in the East.  Cities like Vizag, India, can leapfrog more easily because they don’t have massive institutional entrenchment which makes them more open to technology and the benefits it can bring.

Blockchain if appropriately used can reduce the know your customer issue of investing in startups in the East. A lot of sustainable energy startups are emerging in the East that solve everyday problems using a bottom-up approach. There is a lot to learn from that area and I hope Western startups and tech communities wouldn’t be too arrogant to learn from the East.