Limited Edition of Hublot Watches Will Be Sold for BTC Only 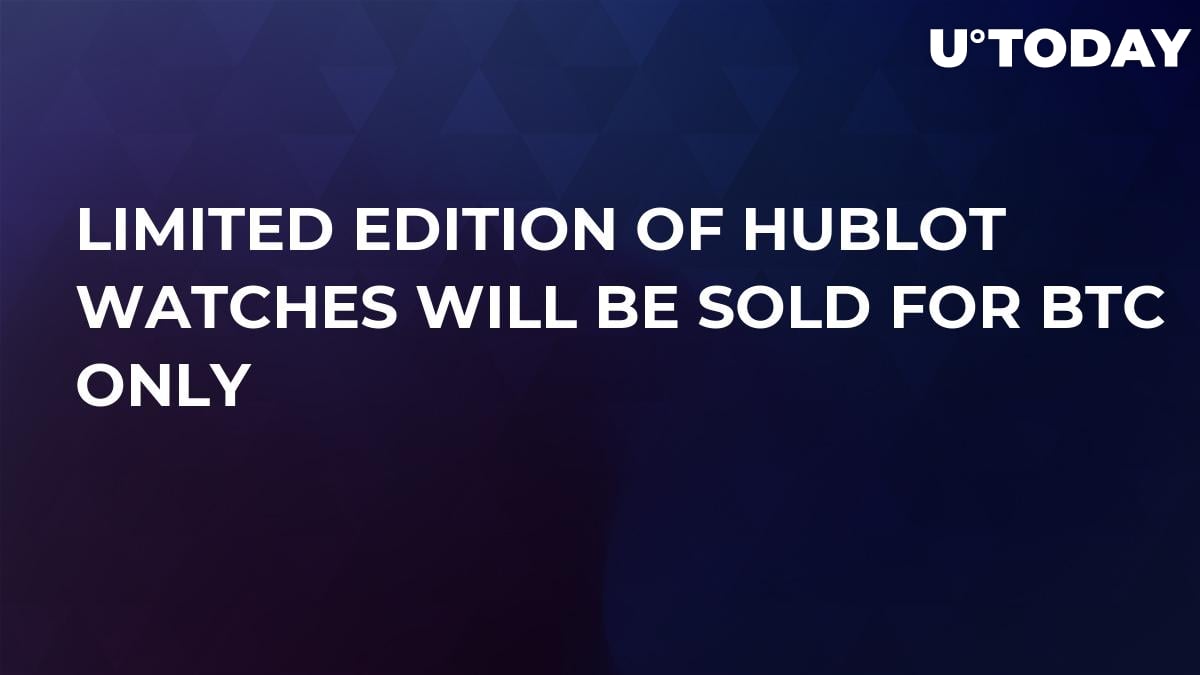 Swiss premium watchmaker Hublot released a limited watch collection named Big Bang Meca-10 P2P. Model is dedicated to the 10th anniversary of Bitcoin and can be bought only for the cryptocurrency. Hublot will release 210 copies of the anniversary model, their official price will be $25,000, the manufacturer notes.

Big Bang Meca-10 P2P was created by Hublot in cooperation with one of the largest Asian digital assets seller, OS Limited (OSL). The basis of the anniversary model was the most famous and successful Hublot’s model — Big Bang watches, created in 2005.

Big Bang Meca-10 P2P watches were produced in a 45 mm black ceramic case. The watch is equipped with the HUB1201 caliber, designed for a 10-day power reserve — by the number of years Bitcoin exists. Each of the 210 instances of the Big Bang Meca-10 P2P will get a buyer’s transaction number.

The number manufactured Big Bang Meca-10 p2p — 210 — is a reference to the fact that only 21 mln Bitcoins can exist. The watch design also reminds of IT-technologies. The leather strap has a pattern of a network of computer interconnects.

The presale of watches began on Sept. 19, 2018; the first time they were officially presented was on Nov. 6. Buyers will receive them in January.

At the same time, industry reps and IT-journalists criticized the watch for an inflated price and a complete lack of high technologies.

Paying $25,000 or their equivalent in BTC, you might think you’ll get a lot of hot technical functions to justify its cost, notes Gizmodo’s observer. The Apple Watch Series 4 for $500 (just 2% of Hublot Meca) can make phone calls, take an ECG, and tell its owner if they’ve got atrial fibrillation.

“But no. For tens of thousands of dollars, what Hublot delivers is essentially a time-challenged Bitcoin fanboy’s wet dream. First, there’s only going to be 210 of these obscenities made — a reference to the fact that there can only be 21 million Bitcoin in existence. Sure. Also, each will be emblazoned with the Bitcoin transaction number used to buy it. Just in the case while you’re on your yacht in Bali with your other ludicrously rich buddies, you take off your Meca-10 P2P and a hilarious watch mix-up ensues,” claimed Gizmodo.

At the same time, critics point out that buying Hublot Meca-10 seems a skosh shady. To make a pre-order, you need to contact OS Limited (OSL), a Hong Kong-based “digital asset” brokerage. They require information that may seem superfluous to customers. It includes the self-portrait with a photo or ID, a copy of ID, proof of address as well as utility bills of bank statements for the last three months.

“And you have a check a tiny little box that allows Hublot and OSL to use your information that you’ve uploaded onto their truly, very secure website. Isn’t that ... sort of counter to the whole ethos of cryptocurrency?” the luxury watches critic concludes.