Bitcoin's True Stress Test Is Yet to Come

Antony Koroid
October was ‘boring’ month for Bitcoin, but its real stress test that will allow it to take its place among the world's reserve assets is yet to come 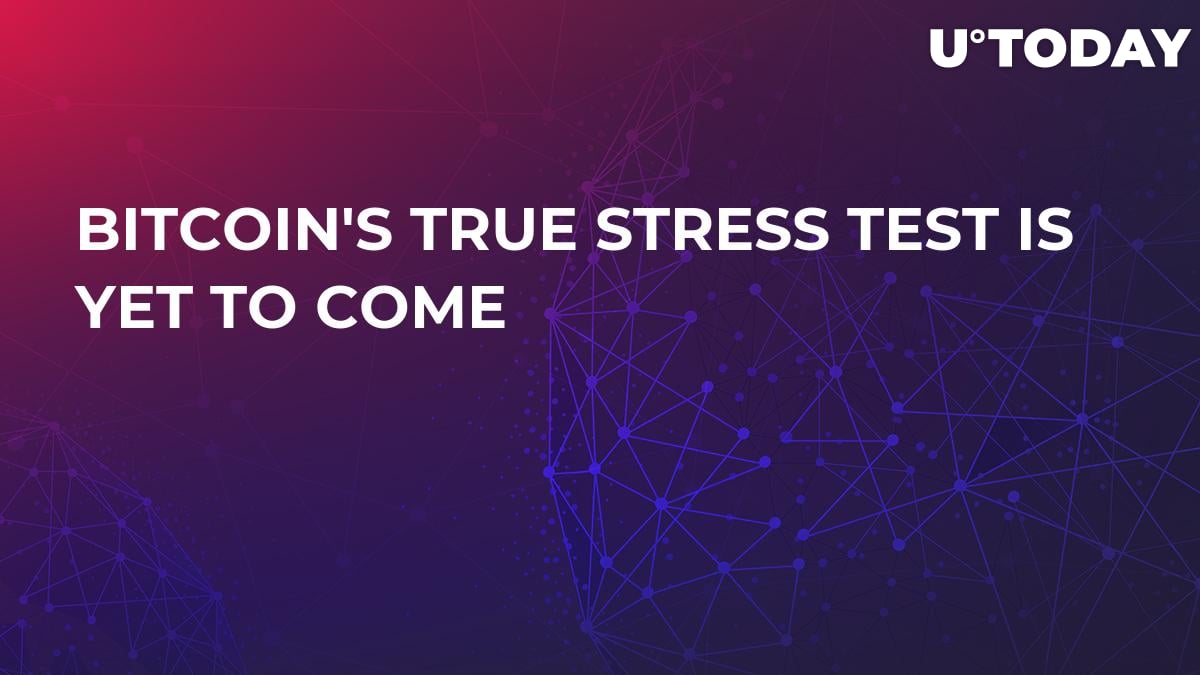 In October, 30 Bitcoin lost $200 of its price, but generally, October was ‘boring’ for it. However, chairman of CoinDesk's advisory board and a senior advisor for Blockchain research at MIT's Digital Currency Initiative Michael J. Casey believes that the real stress test for Bitcoin is yet to come.

Angst on the Street

For those who are concerned about Bitcoin losing another 4% in October to fix its third loss-making month in a row, it's worth to compare this loss with ones in traditional financial markets.

By standard measures, last month was the worst one on Wall Street since the 2008's financial crisis. The Nasdaq index lost 9.2%, the Dow Jones Industrials — 6.9%, the S&P 500 — 5.1%. Riskier markets, primarily technical stocks and emerging market assets, were particularly hard hit.

The 4% decrease is still sufficiently sensitive. At the same time, remembering its past volatility on a background of general market despondency, the current relative stability of the leading cryptocurrency is remarkable.

The wild bubble in the crypto market last year gave the impression that Bitcoin and all other similar tokens are the extreme ends of the speculative class of assets. Many investors hoped that they would be able to follow the world's leading trend and convert Bitcoins to U.S. dollars along with other high-risk assets.

October became ‘boring’ for bitcoin, especially by crypto standards. It was more or less stable until Monday, October 30, when it lost $200. Analysts are tempted to conclude that Bitcoin is attracting a safe-haven bid, and investors intend to hedge their risks stable, but still liquid asset immune from the politics of financial crises. They are attracted by the idea of Bitcoin as a new type of uncorrelated reserve asset, digital gold for the digital era. But the truth is there is very little of this safe-haven buying going on in Bitcoin prices right now.

In September, there was no noticeable transaction surge, only a gradual increase due to the low base reached during the post-bubble period of the late winter.

There are newcomers who still transfer their assets to Bitcoin, especially in places like Venezuela. But for the most part, investors do not believe that this new digital asset can hedge incomes against future political and economic shocks.

So why this well-known volatile asset had a relatively quiet October? One reason is the changing investment community nature which is divided into speculators, buyers and owners, better known as holders. Last year speculators were dominating in the community. Newcomers who led the Bitcoin price to a ridiculous peak above $19 thousand last year are gone now.

Holders, the real bitcoin adherents, are buying the token for a long time and are not going to get rid of it. They are much less concerned about the world markets turmoil, which can get their dollar fortunes to a risky position. The rest of the community can become guinea pigs in the future.

According to a number of market forecasters, things can go really bad in the global economy. Many are afraid that 2008 gets back and the financial crisis turns into a full-scale global economic one. The question is, will the key investors liquidate their Bitcoin assets?

The answer may depend on their real economic profile. Most of them are developers and entrepreneurs, who receive Bitcoin and Etherium income, and then their costs are also largely associated with them. If they can hold on in the crypto economy channel, then maybe they will keep their Bitcoin assets.

In this case, Bitcoin will show impressive stability. In economic chaos around, such sustainability would look very impressive for the whole world, potentially involving newcomers in non-speculative operations.

People who live within such a crypto-dominant economy are much more numerous than crypto critics are willing to admit. However, it's hard to say whether this group is large enough to compensate the pressure of those who will get rid of Bitcoin along with other assets due to the crisis.

There are many new exchanges and trading platforms which complicate the market, but next year huge Wall Street investors may enter it.

Bitcoin speculators tend to view this as a positive prospect. In their opinion, it will lead to higher prices. This is true in the short term, but given the 2017s experience, significant investments can also lead to market volatility.

This is what will provide Bitcoin with the stress test that will allow it to take its place among the world's reserve assets.