How Blockchain and dApps Can Achieve True Decentralization and Massive Adoption 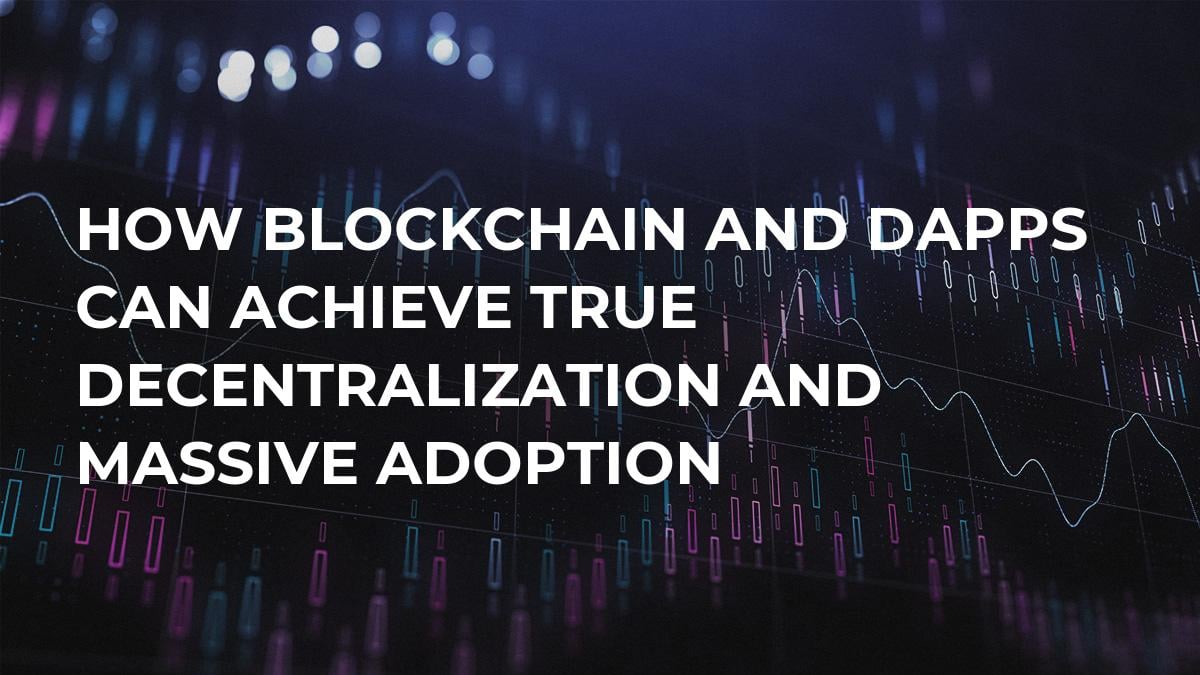 Public Blockchain networks and decentralized applications (dApps) launched on top of the Blockchain are often described as completely peer-to-peer systems that rely on a distributed network of users and developers to remain functional.

Gnosis founder on how Ethereum can reach mainstream adoption

Since its launch in 2015, Ethereum has been designed to function as the base protocol for dApps, supporting the facilitation of large amounts of data on the Blockchain. As of August, Ethereum is processing around one million transactions per day while Bitcoin is processing merely 20 percent of the volume of Ethereum.

Throughout the past 24 months, the Ethereum ecosystem experienced an abrupt increase in the number of dApps and Blockchain projects, primarily due to the exponential growth of the initial coin offering (ICO) market.

Consequently, thousands of Blockchain projects have launched on the smart contract protocol with sufficient capital to finance their operations for over a decade without depending on their Ether reserves.

While the vast majority of projects and dApps have failed, some including Augur, Gnosis, 0x, Aragon and Maker have created base protocols and platforms which other dApps can utilize to offer unique services.

For instance, 0x offers a decentralized digital asset exchange protocol which enables dApps to launch on top of it to process peer-to-peer cryptocurrency trades. Most decentralized exchanges including Paradex, the digital asset relay acquired by Coinbase, have launched on the 0x protocol.

“The numbers we care about is the usage of decentralized applications. And as a next step, the number to look out for is dApps that seamlessly interact with each other and draw a benefit from being on the same platform. As a side effect, ultimately the price of ETH will then be a function of the demand for the use of applications in this reliable, open, and interlinked environment,” he said.

In a separate statement, Köppelmann added that the success of public Blockchain networks should be measured by the ability of dApps to use the services and products of other dApps on the Blockchain, ultimately creating an interconnected network of decentralized systems.

Governance and merit of a decentralized community

The second element that is necessary for the Blockchain to reach complete decentralization and Blockchain adoption alongside dApp network effect is open-source development. On a public Blockchain network, any user or developer should be able to contribute to the codebase of the Blockchain and have a say in its development roadmap.

On proof-of-work (PoW) consensus algorithm-based blockchains like Bitcoin and Ethereum, users, developers, and miners can reach consensus through soft and hard forks, to integrate changes or improvements in the Blockchain.

Segregated Witness (SegWit), a scaling solution integrated into the Bitcoin network last year, is an example of a soft fork implementation that needs majority consensus from users and node operators to officially integrate into the Blockchain.

Soft forks and hard forks allow the community to weigh in on the decision making of integrating certain solutions, creating a decentralized environment in which every individual on a Blockchain network has the incentive and motivation to contribute.

Last month, at TechCrunch Sessions held in Zug, Switzerland, Ethereum co-creator Vitalik Buterin noted that one way to prove the decentralized aspect of Ethereum governance is that if Buterin himself or any other core contributor were to be kidnapped and forced to write code, the community will have to first approve of the changes before they are integrated to the Blockchain.

Hence, it is not possible at the current stage, that a central authority takes over a public blockchain network and manipulate its codebase.

“The thing with developers is that we are fairly fungible people. One developer goes down and someone else can keep on developing. If someone puts a gun to my head and tells me to write a hard fork patch, I’ll definitely write the hard fork patch. I’ll write the GitHub issue, I’ll write up the code, I’ll publish it, and I’ll do everything they say. If I do this and publish a hard fork patch to delete a bunch of accounts, how many people will be willing to download the update, install it and switch to that update? This is called decentralization.”

For high-performance Blockchains, those that claim to process a million transactions per second, it may be difficult to have a completely decentralized governance system in place to lead long-term development. If this is the case, the long-term adoption and growth of the Blockchain could be sacrificed for short-term gains in scalability.

Already, with Ethereum for instance, an open-source developer community is working on the development and implementation of Sharding and Plasma, two scaling solutions that are expected to increase the capacity of the Ethereum network to potentially one million transactions per second in the years to come.

0x protocol has integrated an onchain and offchain data processing solution of its own to reduce the burden on the Ethereum mainchain and Zilliqa, a high-performance Blockchain launched on top of Ethereum, has focused its development on Sharding. Status, a popular mobile client for Ethereum, has also introduced the first widely utilized Sharding client, allowing both dApps and users to benefit from efficient scaling.

Other projects aim for mass appeal— for example, ONO, which is building a social network as a dApp on EOS. And some projects even take it a step further and make the social network an integral component to their blockchain as in the case with U.Community and UOS with the idea of U.Community being the social interface to the UOS Blockchain, making the blockchain governance frictionless and accessible to every user.

The benefit of having a truly decentralized governance system in place is that it allows for the creation of a community that supports each other to produce dApps, scaling solutions, and other unique products that will be crucial for mainstream adoption in the long run.

With Blockchain networks that are restricted by some central parties and moderators, it is difficult for an open-source developer community to exist and contribute actively to the codebase.