Why Does Bitcoin Have Any Value?

Alex Dovbnya
Some naysayers believe that Bitcoin doesn’t have any value since it’s “just data,” but they seem to forget that we live in the era of digitalization 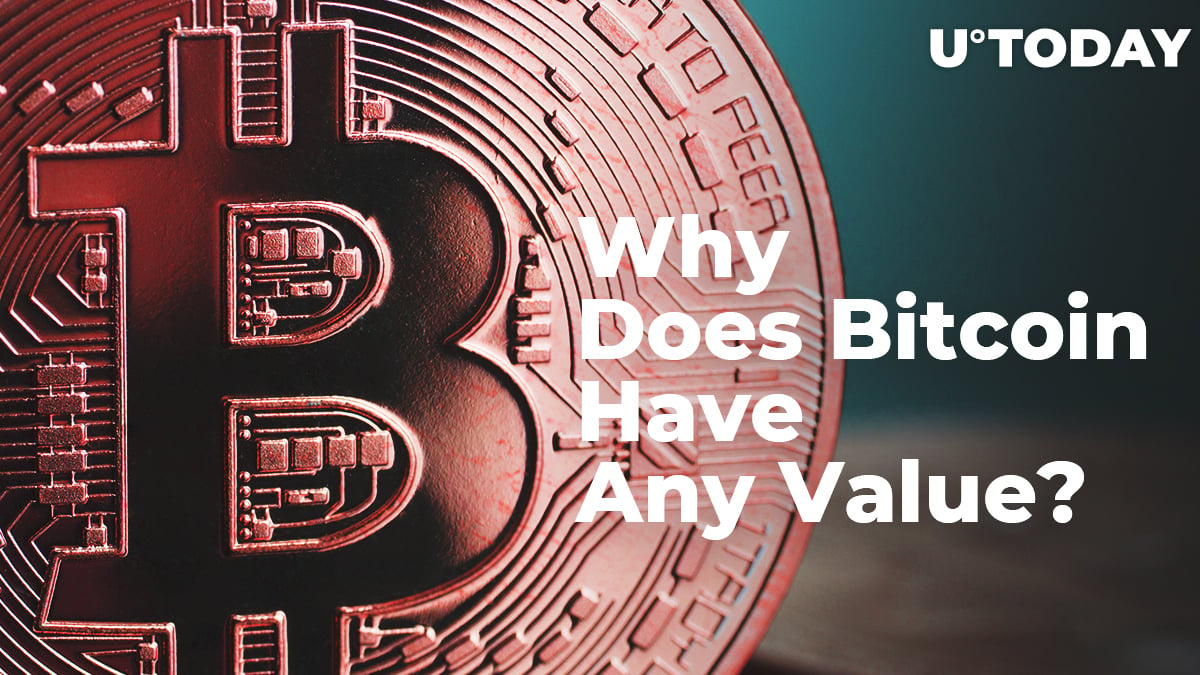 Back in 2013, when a famed American economist Paul Krugman wrote his infamous op-ed article “Bitcoin Is Evil” for the New York Times, it sparked a debate about whether Bitcoin has any value. In 2018, he wrote another article entitled “Bubble, Bubble, Fraud and Trouble” which states that Bitcoin fell by over 40 percent in merely weeks. Therefore, let’s figure out why Bitcoin has any value and what major factors determine it.

So, why does Bitcoin have value? In order to determine why anything is valuable, it’s worth mentioning such basic economic terms as utility and scarcity. If there is something that is not commonly found (and it can be useful), it will create demand for this specific product, which would eventually push its price.

Gold, the best performing asset of the 21st century, is probably a textbook example of a valuable product since it has high scarcity (gold is not the rarest metal, but it is still hard to find and extract) and, yes, it is shiny, which drives consumer satisfaction.

It’s now clear that anything that has any value should check the following two boxes (scarcity and utility). Bitcoin naysayers claim that Bitcoin doesn’t have any value, but they are almost certainly wrong. Bitcoin has a fixed supply of 21 mln coins. In fact, Bitcoin seems to be the most desirable asset. If compared to gold, there won’t be another gold rush, which would enhance its supply and the market crash.

Once we’ve figured out that Bitcoin is actually scarce, let’s get down to Bitcoin’s utility. Of course, Bitcoin’s utility lies in its decentralized nature since not a single person can preside over the network, unlike centralized banking institutions. Another important feature of Bitcoin is that it can be used for making practically any kinds of transactions – from buying candies to purchasing real estate since the coin is trivially divisible. Earlier, Cryptocomes reported about Australian homeowners selling their houses for Bitcoin.

However, now we get down to another popular talking point of Bitcoin critics who claim that Bitcoin doesn’t have intrinsic value. Yes, gold is shiny and appealing to people who want to feel the sense of wealth, but one should not forget that it is also a metal that is commonly used in numerous industries (dentistry, electronic and so on). On top of that, some individuals assume that paper money has intrinsic value as well because you can do plenty of things with banknotes (kindling, making notes and so on). However, if you dig deeper, you will realize that jewelry accounts for more than 50 percent of global gold demand, according to the statistical data provided by the World Gold Council. Meanwhile, barely 15 percent of gold is used in other industries, including electronics and dentistry.

As U.Today reported earlier, Krugman, a vocal Bitcoin skeptic, said that Bitcoin may overtake gold since he thinks that the former has much more potential in the long run.

It gets even worse when with paper money. The Federal Reserve states that it takes only 13.2 cents to produce a $100 bill, which represents the intrinsic value of this banknote. The remaining $99.87 depending on how much trust people put in the US dollar.

Global IT behemoths in the likes of Facebook, Apple and other companies purely rely on digital trust. Not long time ago, one wouldn’t believe that Amazon could be worth more than $1 tln.

Bitcoin is not wealth

Many people fail to understand the concept of Bitcoin because they have no idea how money works. Money just serves as a facilitator for exchanging wealth, but it does not have any value per se. People do not actually like digital coins or paper banknotes – people like things that they can buy with them.

What gives Bitcoin value? Yes, Bitcoin is just data, but that’s all money is about – transferring information. At the same time, Bitcoin has numerous advantages over ordinarily fiat currencies because of its decentralized nature:

Bitcoin is unique in the sense that this is the first digital currency that is not issued by a centralized governing body. As mentioned above, Bitcoin is rarer than gold because of its finite supply. On top of that, the flagship currency offers more flexibility and privacy than modern banking systems.

Where does Bitcoin get its value? Once we have already figured out that Bitcoin does have value, it is essential to figure out what exactly determined it. It is worth mentioning that Bitcoin value shouldn’t be confused with the Bitcoin price (the momentary cost of the currency). Bitcoin value can be:

Why is Bitcoin price so volatile?

Bitcoin price is determined by the current market sentiment. The demand for the coin – the higher price. Just like with any goods at your local supermarket or a bar of gold. Bitcoin is known for its huge fluctuations. Even though the currency’s volatility has recently reached its two-year low, Bitcoin price is still wont to erratically move up and down.

Speaking of volatility, it is important to mention that stocks, oil and other commodities are volatile as well. However, Bitcoin (along with other cryptocurrencies) have more dramatic price swings because the scope of the cryptocurrency industry is still small compared to other huge industries, so it is still prone to market manipulations.

Can Bitcoin price go to zero?

While it’s clear why cryptocurrencies have value, there are plenty of speculations of whether the biggest cryptocurrency in the world can become completely worthless. Back in December 2017 (during the Bitcoin’s peak), Morgan Stanley’s James Faucette came up with a prediction that Bitcoin price could eventually go zero.

If nobody accepts the technology for payment then the value would be 0 Faucette said in his analysis.

Over the course of history, there have been numerous currencies that would become completely worthless. The German Mark is one of the salient examples. The Zimbabwean dollar is considered to be a modern example of such a currency. Bitcoin, with its slew of innovative features, is really looking like a disruptive force, but no currency is safe from going underwater. On the flip side, Bitcoin enthusiasts will soon celebrate the currency’s ten anniversary, which is a rather extensive period of time to say that Bitcoin is here to stay.

As a basic rule of thumb, no currency is considered completely safe. Sure, Bitcoin is more volatile than the majority of fiat currencies, but no one can definitively state what is going to happen to the coin in the nearest future. If you want to see what the industry’s top experts have to say about, check out our top Bitcoin price predictions.

If Bitcoin adoption grows, there is a practical limit on where its price may go. The US dollar is the only currency that accepted by the government in order to pay taxes, “intrinsic value” and it is widely used in commerce, so it may take decades for Bitcoin to get on this level of adoption.