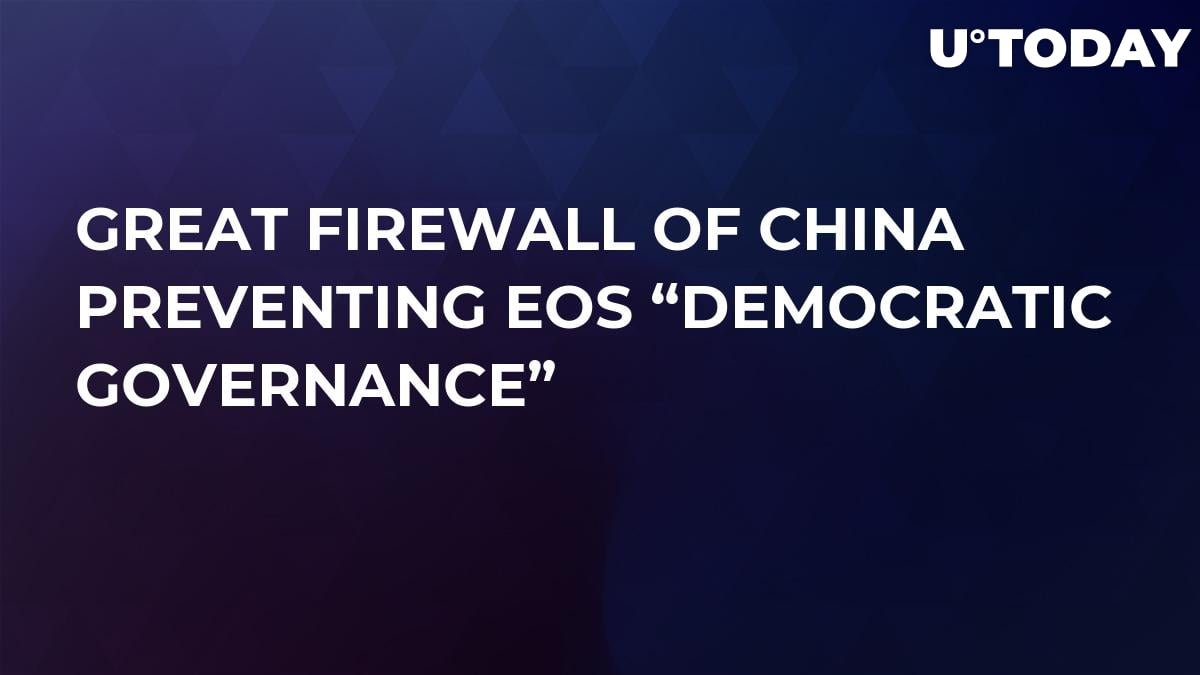 Back in June, two groups were competing to launch the EOS mainnet. After this was solved to mutual consent, another trouble emerged. The Chinese Great Firewall.

East does not meet West. On linguistic barriers and Telegram vs. WeChat

The first barrier that makes the mutual democracy-based EOS governance difficult is the language barrier: the team in the West speaks English, as is pretty much all the rest of the world except their partners in China — they happen to speak Mandarin, a language substantially difficult and much more complex. Besides, the infamous governmental control over the Internet in the Celestial is also putting spokes in the wheels of EOS governance. Part of this scenario is that the Western party prefers encrypted Telegram messenger and the Chinese party has no alternative to WeChat.

Thus, two separate strategies are being implemented simultaneously, making EOS failing to deliver on its commitment to provide a democratic mainnet governance. Besides, token holders have been suffering. Many of them have lost their private keys due to the platform hacks, in the Western part, their tokens are at least protected from being stolen too. Thanks to the EOS Core Arbitration Forum (ECAF), quite a controversial organization, many believe that EOS is not that much decentralized in reality.

EOS users in China have suffered from scams and malicious attacks as well as in the West. However, Chinese investors did not have access to Telegram, where ECAF did all the arbitration. Here comes the language barrier too — the folks in Telegram do not speak Chinese. Chinese users faced a double damage — no Telegram (they use WeChat) and poor English skills (but excellent Mandarin knowledge).

Recently, though, certain movements inside the EOS community are showing that both shores are trying to build a bridge. A new body has emerged — the EOS Mandarin Arbitration Community (EMAC). Its goal is to provide Chinese speakers with a channel for solving disputes. Two of its regular members are also on board of ECAF.

Both sides truly believe that it’s possible to overcome the barriers in languages and mentality to mutual consent.

The Chinese community (EMAC) gives it to their Western colleagues admitting that the official language of EOS is English. The official messaging app seems to be Telegram too since it cannot be accessed from within China.

Related
The Evolution of Blockchain and Cryptocurrency Usage: Normalizing and Innovating

So, Chinese-Mandarin gets the second place on this global scale. The third EOS official language is Korean. Spanish speaking block producers have been complaining that it is hard to find any information on EOS governance issues in their mother-tongue, both in Spanish and Portuguese versions. Everybody seems to admit that participating in discussions on EOS governance issues require strong English skills.

Shall we drop China entirely?

Part of conspiracy legends inside crypto community claims that decentralization does not matter since the handful of people who actually control Bitcoin, Ethereum and other crypto are China-based. They reportedly do not give a heck about decentralization.

These unconfirmed theories have added fuel to the controversy when Twitter rumors appeared describing “collusion, mutual voting, and pay-offs that occur amongst the Chinese BP community.” Reportedly, these allegations started on WeChat.

The Western EOS community in Telegram recently responded by suggesting that everyone stops voting for the Chinese block producers in the light of all the accusations though unconfirmed.

Happy ending on the horizon

The situation seems to be improving. Now there is EMAC that is busy raising the awareness of fair EOS governance among the Chinese community members and initiate cooperation between Chinese-speaking and non-Chinese-speaking communities regarding arbitration and governance issues.

Two of EMAC members have also joined ECAF, so now the Western ‘regulatory body’ has two Mandarin speakers on board, which should bring down the number of troubles for the Chinese party.

One thing is good: both sides of the EOS community, despite all the allegations and language/mentality differences or difficulties imposed by the Chinese government, have chosen to collaborate, admitting that they have a long way ahead.