Does a Bigger Market Cap Mean a Better Blockchain Company?

Darryn Pollock
Coinmarketcap.com is visited by hundreds of millions of people, so what does it mean for a token that cracks the top 100? 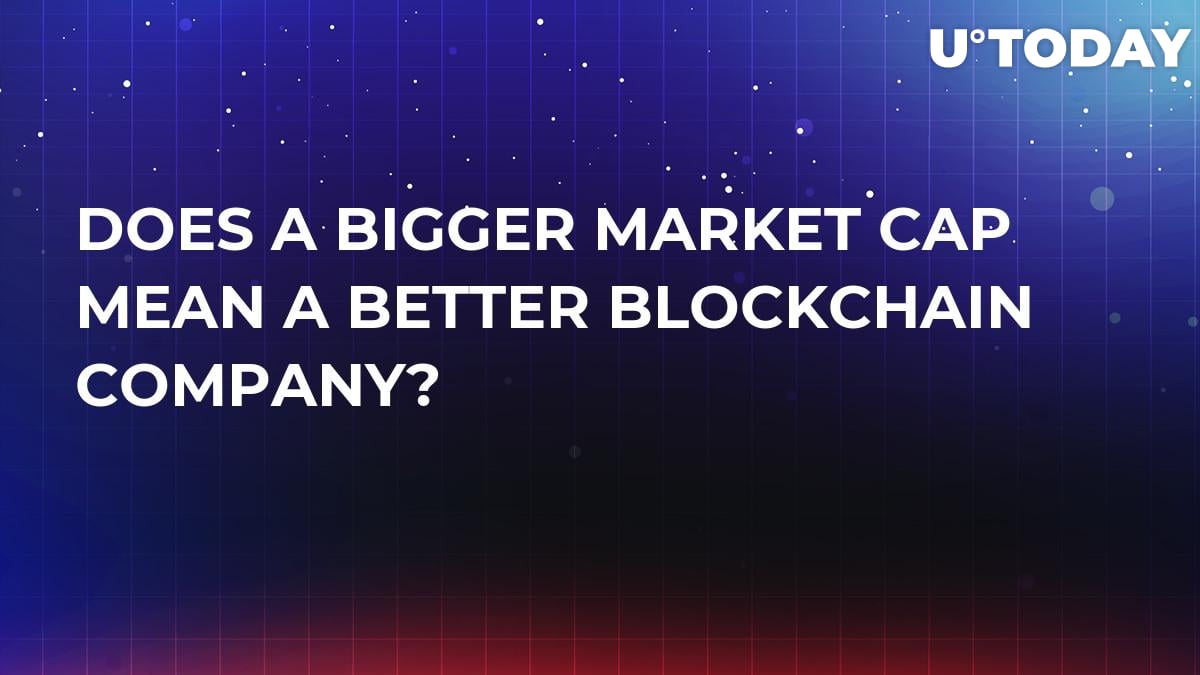 Since the Blockchain boom in the early part of 2017, there have been a number of Blockchain companies emerging with an idea that a cryptocurrency or a Blockchain token can be a disruptive force and affect a specific targeted sector.

However, there have also been a lot of failed ICOs, poor businesses, and fly-by-night scams. The frenzy around ICOs made it easy for a lot of projects to earn money without any checks or balances, and a lot of money fell into some bad investments.

Essentially, it came down to the value of the business and whether it was making progress. Because of the speculative nature of the ecosystem, determining that was hard to do in any other way than on hearsay.

But, there is one overarching metric in the Blockchain space which spells out the worth of Blockchain companies along with decentralized cryptocurrencies, and that is their market cap. Market cap rankings seen on sites, such as coinmarketcap.com, are viewed as an important measure, but they are a measure of a successful or potentially successful company.

If one starts to understand the market cap and the value of a company’s tokens as an intangible asset and a way to measure the equity of these new and unprecedented companies, then they must follow that success in the market cap rankings is the equivalent to a successful and valuable company.

A new breed of intangible assets

Traditionally, one way to value a company was through the equity and tangible assets. Intangible assets, like brand power and other more technically valuable things, were always hard to consider unless an IPO or publically traded stocks became available.

However, with the tech boom, companies like Microsoft and other tech giants relied much more on an intangible valuation of their company. Now, with the boom of Blockchain companies and the definite need to value them in discovering if they have what it takes to succeed, there needs to be a new metric.

To this end, considering the value of a company’s tokens, its growth along the market cap and the interest it receives from a decentralized investor base can be considered an even better way to determine intangible value.

The value of the market cap

There is a number of benefits that come with firstly breaking into the top 100 market cap rankings, and there is even more when the value of a company continues to rise through the rankings.

Nexo, a cryptocurrency-backed loans company, recently saw the advantages that came with cracking the top 100 market cap after a bout of good news and decisions from the company.

Nexo is currently sitting at 62 in the market cap rankings, not having been featured in the top 100 less than a month ago. For Antoni Trenchev, one of its co-founders, there is a lot of good that comes with this for their company and the Blockchain space.

“For those on the outside looking in, it is often the first port of call to determine the size of a business,” Trenchev explained about sites like coinmarketcap.com. “I believe this rise up the market cap standings is not only a magnificent milestone but also a good space to be recognized by potential customers and investors. It is also a recognition that the company is doing well, especially in terms of how we deliver our crypto loans.”

Trenchev believes that with the current climate, especially for ICO companies, it is now more important than ever to show growth and deliver on promises. The bearish market has made it difficult for cryptocurrency companies, and the so-called ICO bubble has made it even harder.

“Because Blockchain companies are still so new, and as such, are trying to find their feet in the global market, they have been increasingly difficult to value. There have been things like ICO bubbles and a huge hype that have overinflated the price and value, but those companies that have succeeded and stuck through it are now starting to shine,” he adds.

“In the very near past, we had quite unrealistic valuations of Blockchain companies that were clearly unsustainable; a market cap of $1 bln for a company can be quite elusive as liquidity apart from very few of the 2000+ crypto assets is no way near liquidity in the traditional stock markets.”

“Now, after a few months of a market correction, we are seeing a normalization of valuations which is a positive outcome, and this is ultimately a good thing.”

Value at the top

The thing with the market cap rating is that it is a very dynamic and fluid ranking system. Coins that were near the top can easily fall away and crash to nothing. The market cap of a company surely has some effect in determining its value, but that value needs to maintain and grow for there to be a real belief that the project is solid.

Trenchev makes decent points about additional advantages that come with reaching a promising point on Coinmarketcap, and those advantages need to be absorbed and grown in order to help the company be a success.

If a company cannot maintain its high standing in market cap rankings, it is probably a bigger red flag than if it is lower down the rankings but at least steady.