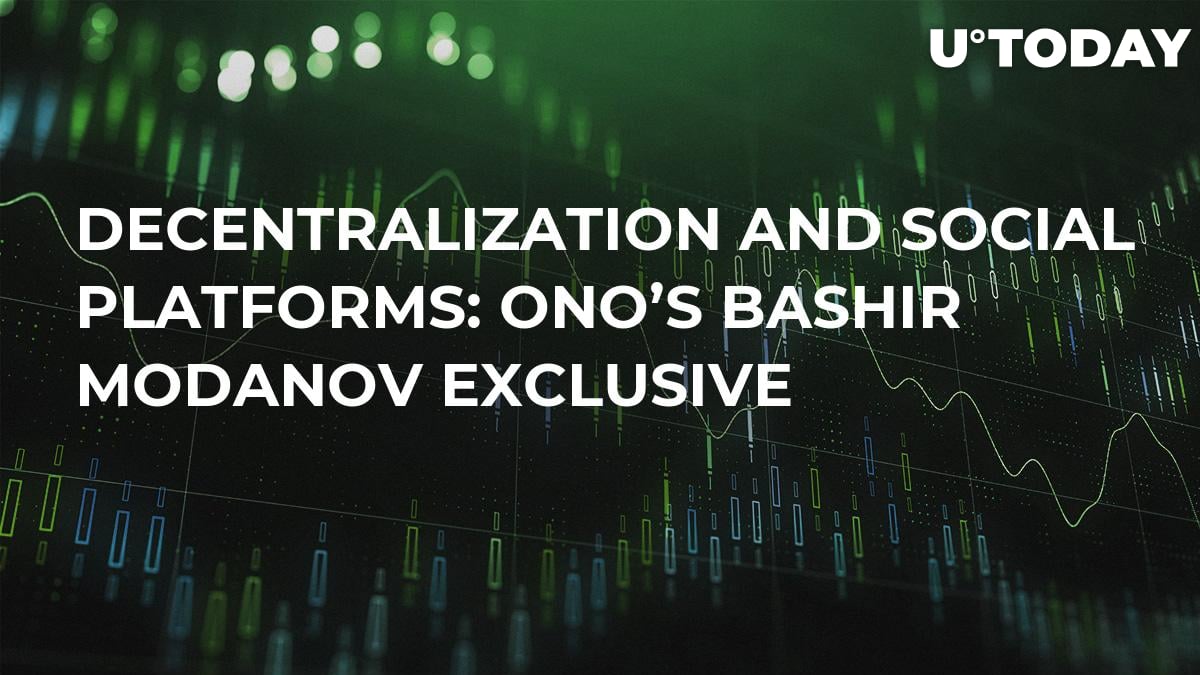 U.Today is bringing you an exclusive interview with Bashir Modanov, Global Marketing Director of the recently established decentralized social platform ONO. A native of Kazakhstan, Modanov is now based in Beijing, China, where he was working as a business executive for a number of high-tech firms before joining a startup company with a very particular vision. Our journalist Maria had a chance to catch up with him in person.

U.Today: You are defining ONO as a decentralized social network. How did the idea of putting a user “at the epicentre” of it all come to you? What’s the background of this idea? You specifically listed diversity as one of the distinct features of your social network. Can you expand on this?

Modanov: We are a social network based on the Blockchain technology. The reason we came up with this concept is that when you look around, all you see is heavily centralized platforms that make profits from their users by selling their data without any regard for the law. As a result, many platforms today make the headlines mostly due to their ignorance and neglect. What ONO offers is different. We provide features similar to other social networks, but ours is a unique concept that has introduced self-governance and a reward system for its users by allowing them to tap into their own net worth. It should also be noted that ONO is, first and foremost, a decentralized platform, and, as such, offers the benefit of data protection, since the platform is not capable of withholding any of its users’ information.

U.Today: Back in June, you announced that you were going to be an EOS BP Candidate. What are your current aspirations? Are you aiming to make it into the top 21?

Modanov: Yes, that’s right, we were an EOS block producer candidate, but our strategy has shifted, because we feel that EOS is not a platform. The costs of integrating it are sky-high, while the benefits are meager. So, we came up with our own main network that we simply call the “mainnet”, with the view to create our own chain, which is currently in progress.

U.Today: You say that you have Super Partners, and their main job is content management. Is there a possibility for collusion?

Modanov: There was this possibility before. It actually happened with EOS. But we’ve since decided to use a different track: there will be a totally different voting system, and possibility of collusion will be completely eliminated.

The Super Partners are a group of individuals from all walks of life who moderate the network independently. What happened with EOS pushed us to use a different type of scheme, so as to avoid potential problems.

We have set up a voting system different from what EOS offers, such as 70% of the work is done in an automated manner, while 30% of what we do goes through machine learning. In the future, our aim is to develop this capacity, that is, have 90% of the work done using machine learning and only 10% of it done manually.

U.Today: Are your AI and Machine Learning algorithms running on your servers? Or are they decentralized?

Modanov: Actually, we are already cooperating with some AI-focused companies in regards to the KYC process, content research, and targeting. As soon as our mainnet is launched, we’ll be ready to move everything from our servers onto the Blockchain.

U.Today: What are the main functions of the platform: describe what I can do there and how it promises to change my life?

However, the difference is that ONO comes with a reward program. For each engagement, you can earn tokens, called ONOT, which you’ll be able to change to fiat currencies. This unique ecosystem is gaining recognition worldwide.

By the time we launched in August, we offered our first 300 000 users 300 tokens each for registration. We now have a growing community of 3mln+ users: the registration reward is 50 tokens, as is referring a friend. Another way to earn tokens is to publish posts, since this mechanism also works for post-based calculations. Frankly speaking, right now most of the users are already using the decentralized App, sharing their moments and earning coins, but in the future there’s going to be a feature which will also allow them to exchange those coins for fiat money.

U.Today: You are actively participating in various events, among them Consensus. What are the future plans for the Asian roadshow?

Modanov: There are a bunch of conferences happening all over Asia. One of our next stops will be Cointelegraph’s Block Show, a huge event hosted in Singapore.

U.Today: How is user identification going to be handled? And how are you going to fight the Sybil Attacks?

Modanov: The KYC option allows users to have their identity verified, and as such your user power is increased compared to a non-KYC-verified user. As a verified user, you can write really long posts (more than 500 words), and you can share your photos. For non-KYC users, we’re implementing AI-solutions, but these users will indeed have limited power on ONO and won’t be able to share as much information.

In terms of Sybil Attacks, I don’t think there’ll be a huge problem with that: the Blockchain is one of the most secure cyber spaces we have seen so far.

Related
The Society of the Spectacle Interrupted: How Blockchain Can Set Theater on Fire

U.Today: In 2018, everybody in the crypto industry understands that massive user adoption of decentralized systems will not happen unless UX is on par with centralized systems. This is especially true of social networks. What is your solution to ensure that the user gets the best possible experience while using a decentralized platform?

Modanov: Many users haven’t been able to experience the best of the Blockchain as most decentralized systems are poorly built, and, as a result, aren’t offering their effective solutions to the public. That’s what we’re looking to change. You can try our App, which is available on Google Play and the Apple store, to see it for yourself. Currently, we’re working on adding fun, useful features unavailable elsewhere on the market, and one of the upcoming features we’ll be introducing soon is a wallet for users to buy, exchange, and transfer coins.

U.Today: You mentioned POC (Power of Contribution) in your white paper. What are the principles behind it, apart from it being the incentive for users on your platform?

Modanov: The power of contribution is something more than just registration: we’re using it to evaluate content and reward users with tokens, so that the users also become contributors.

U.Today: For a social network, getting a critical mass of active users with valuable content in the first stages is crucial for creating the much needed snowball effect. What is your strategy to make it happen?

Modanov: We are trying to attract more and more creative individuals, creative users, and top writers on Steemit to deliver decent content. I think a lot of people will be coming to our App for high-quality content and fair interaction, as it offers many more benefits compared to many other currently available platforms.

U.Today: In your white paper, it’s written that for the starting phase you launch ONO on the Ethereum network in order to gain a limited number of initial users and you later plan to migrate to EOS once all has been properly launched. When exactly then is the migration to EOS scheduled?

Modanov: The white paper hasn’t been updated for quite a long time, and so there are some facts on it that have since been modified accordingly.

We’re planning to launch our token system on the Ethereum network, but not the App, and we are creating our own main chain, called the ONO chain. The first testing phase is taking place this December, while the main chain is due to be made available at the beginning of next year.