The Society of the Spectacle Interrupted: How Blockchain Can Set Theater on Fire

Katya Michaels
Online presence is a commodity, but whose? Blockchain is to bring the justice back 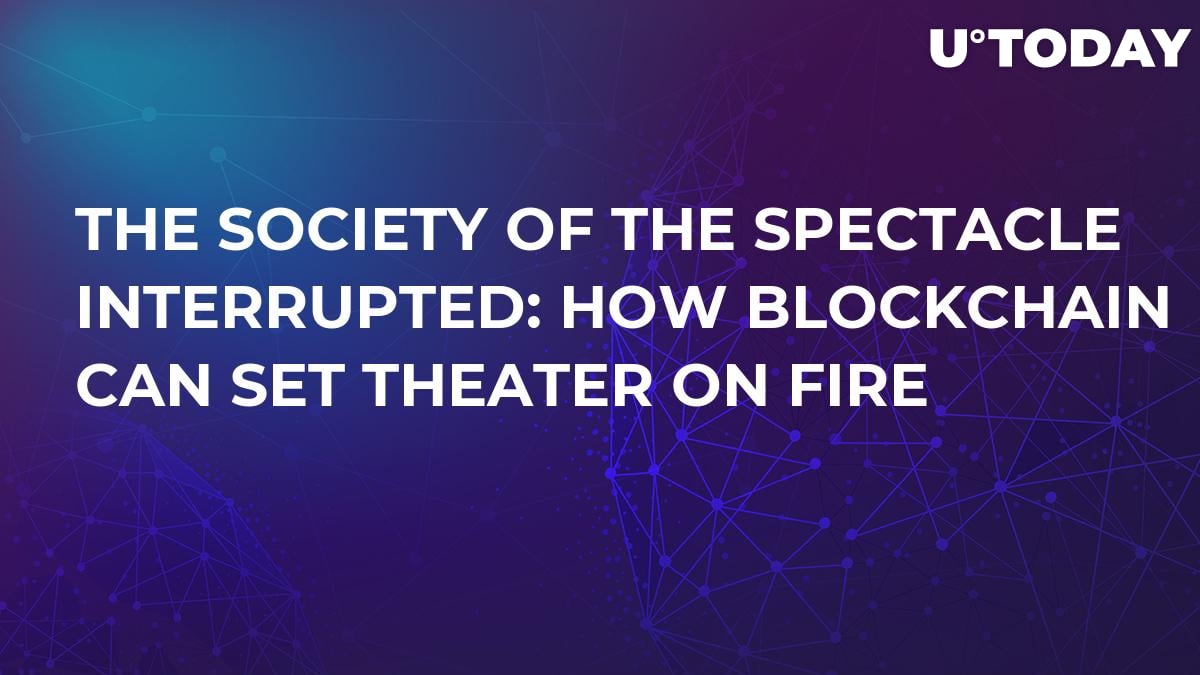 Thought provoking entertainment based on alternative history and science fiction is enjoying somewhat of a renaissance, with video platforms like Netflix and Hulu releasing entire seasons of new series what seems like every month. Aside from aspiring to and, arguably, in some cases succeeding with, intriguing premises and smart scripts, these modern depictions of imaginary realities often feature the obligatory mind-altering twist ending.

The twist ending boasts an impressive cinematic history– from the Statue of Liberty in Planet of the Apes to Kevin Spacey’s feet in the final scenes of The Usual Suspects and Bruce Willis’s bloody shirt in The Sixth Sense, just a little bit of contradictory information can reveal exactly how much we’ve been taking for granted all along and turn our understanding of the circumstances upside down. Given our enjoyment of edifying perspective flips in fictional works, it’s ironic how rarely we take the trouble to adjust and rethink perspectives in our daily lives.

The most pervasive alternative reality of modern life, the virtual space of social media and Internet transactions, demands a critical look that is long overdue. It’s time to examine where we really are, trace the garden path that led us here and envisions solutions that will work in the context of our new-found awareness.

The New Yorker cartoon “On the Internet, nobody knows you’re a dog” was published in the summer of 1993, when barely anyone had daily access to the web, but it turned out to be an uncanny portent of the age of online dating, Internet profiles and digital fraud.

The Internet discovered and filled a need for venturing beyond the reality of one’s life to explore situations and identities that would be otherwise inaccessible. Our online lives became both a reflection and a distortion of real lives, a space with its own rules, a world within a world– a heterotopia, as defined by philosopher Michel Foucault in the 1960s.

In Foucault’s vision, a healthy society would have room for many heterotopias, providing a means of exploring perspectives and experiences that differ from the dominant reality, as well as a way to escape authoritarianism. However, as a representation of alternative, transgressive, contradictory or transforming values, a heterotopia can become both a utopian vision and a dystopian perversion.

So what are the rules of the Internet heterotopia in which we spend so much of our time? What are its governing principles and economic realities? Most importantly, how does it now affect our real spaces?

In another throwback to the pre-Facebook era, a 2002 commercial of a high-speed Internet provider features a web surfer who, due to the superior download speeds offered by the advertiser, reaches “the end of the Internet” because he has “seen everything there is to see.” Obviously, the punchline would fall flat now, because the amount of new content contributed by online users on a daily basis is staggering.

Human beings have a natural inclination to take pride in their achievements and to share important events with their social circle, but the real driver of user-generated content is the validation provided by the community’s response. In this respect, the world of social media seemed to be a forum for self-expression unlike anything that existed before– an addictive, infinite experience that was offered to us free of charge.

The consumer or the consumed?

We jumped at the opportunity to make our opinions heard and our existence recognized, contributing to the immense accumulation of visual and textual data about ourselves and our closest connections. In 1967, French philosopher Guy Debord’s work The Society of the Spectacle expressed concern that genuine activities of life were being supplanted by the spectacle– a space where human relationships are mediated by an endless mass of images that preclude real experiences and thwart critical thinking.

One of his observations, “All that was once directly lived has become mere representation,” is such a compelling critique of today’s Facebook and Instagram culture, that it’s difficult to believe he was writing these words half a century ago.

As experiences were taken out of real spaces and deposited into the heterotopia of the Internet, they became commodities– and as these commodities were fetishized, they came to govern the consumers of the content rather than being governed by them.

Where there are commodities, there are profits and who are the beneficiaries? Not the producers of the commodified content, as it turns out.

The users’ experiences and the community’s engagement with those experiences have been commoditized and monetized by the spectacle’s platforms– until recently, without the users’ awareness. Instead of being an escape from repression, the heterotopia of social media revealed itself as a labor camp.

We thought our online presence gave us a way to protest the machine peacefully– instead, our resources have been feeding its furnaces. As we are using online services, the products of our social activities are consumed by third parties. The camera zooms out to show that the users are actually the workers, pulling at the harness of the spectacle engine while transfixed with the imagery in their phones. It’s a blockbuster-worthy perspective flip– we should be paying attention.

As revelations of privacy violations by major social networks and commercial platforms come to light, user response seems underwhelming. Many are still unaware of the scope of commoditization of personal data, and others feel that the costs of transitioning away from existing online interaction models is too high.

Even the trigger that usually moves people to action, the realization that they are quite literally being swindled, seems weak in the face of the spectacle’s power.

Debord believed that the only way to interrupt the flow of the spectacle was by using stronger spectacular images– situations that would bring about a profound disruption of the existing processes of life, politics, economics and creativity. Perhaps Blockchain technology can be that disruptor– a way to give content ownership back to the users. Although the society of the spectacle may not be entirely interrupted, the alienation it perpetuates may be healed by refocusing on the true value of individual contributions to the community and redistributing compensation where it’s due.

Foucault’s heterotopias are necessary for a diverse and liberated society, as they provide refreshing contexts for our interactions in real spaces. We have seen how the internet’s transfiguration from a heterotopia to a dystopia has soured our belief in human dignity and progress.

It’s our responsibility to give some thought to the ways Blockchain technology– transparent, secure and based on a belief of fair and equal participation– can shift the Internet community toward a utopian state.