Bitcoin Ready For Correction; Ripple, Monero and Litecoin on Their Way Down

Dmitry Cake
Do you believe in eternal growth? Neither do Ripple, Monero and Litecoin investors as altcoins show first signs of decline 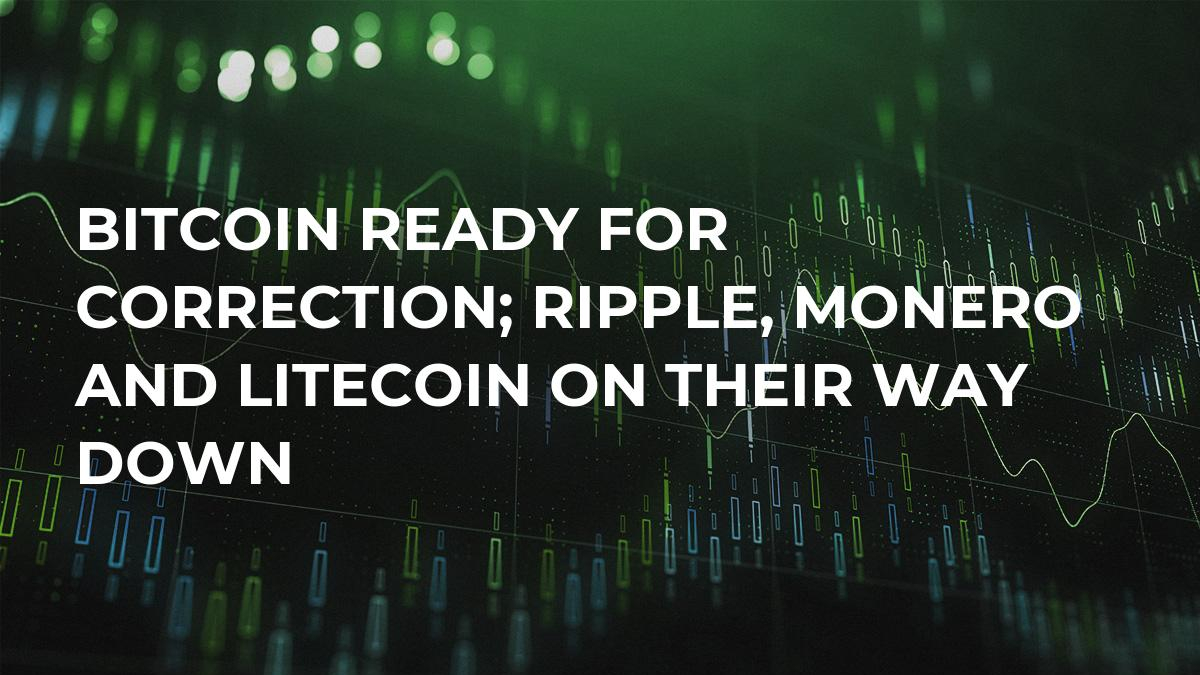 Once again, the middle of the week risks becoming a local turning point in the market. Sooner or later, such rapid growth has to be paid for and we are sympathetic towards those who bought Bitcoin at, say, $9,700. They may still be able to break even within the next few days, but this kind of recklessness is not the best companion in cryptocurrency trading and may eventually lead to ruin.

In the meantime, the capitalization grew by a modest seven bln over 24 hours and is now $433 bln.

Bitcoin dominance, as we predicted earlier, has stabilized around 38 percent and may start growing again in the event of a correction, since decline rates are usually higher for altcoins.

Red daily values are already cropping up amidst assets: first of all, this is Bitcoin Cash, IOTA, Dash- everything that had been growing most actively in the past few days.

A few altcoins still growing but not for long

Continuing to climb are EOS, rising by 20 percent with the news of a main net launch in June, and Bitcoin with an increase of six percent. TRON burst into the top 10 with an impressive 30 percent of growth, but here we are dealing with pure speculation. According to experts, the project is fundamentally weak, so we believe it will leave the top 10 as quickly as it came in.

Despite its weight, Bitcoin seems to have overcome the laws of gravity and grew by another $250 after reaching the goal of $9,500, which we discussed yesterday. At the moment, we have seen growth without fallbacks for seven days.

Meanwhile, the bulls are already beginning to slow down, and we are seeing candles with rather long shadows on the four-hour graph. Under different circumstances, we could suppose that this is a forced stop before continued growth, but given the previous movement, the loss of momentum is threatening a fall.

The achievement of the first goal, located at the upper boundary of our formation of ascending channels, leaves no doubt, while the realization of the second and third targets will depend on the appetite of the bears.

In the current situation, growth is only possible by means of a miracle, for instance, if a big player will support purchases with a huge volume. In this unlikely scenario, $10,000 could become the next goal, but it would be reckless to build a trading strategy based on this assumption.

On Monday, we congratulated our readers on the achievement of the third medium-term growth target with a slight error, but in the course of the past day the bulls managed to conquer $0.95- we promised and our forecast came true. This was followed by the expected fallback, which continues now. Its depth fully depends on the efforts of bears in the trading pair BTC/USD.

The first decline target is the level of $0.85, which coincides with the 0.236 value of the Fibonacci retracement, followed by $0.8, the level of the previous local "piercing" down. Finally, the third target is located at $0.77 and is denoted by the 0.382 value of the same grid.

First of all, given the amount of capital that went into Ripple in the last two weeks, we assume that big players will actively defend their positions. Second, a deeper correction will break the ascending channel, which will create problems for buyers in the future.

However, in the case of such a negative scenario, we will indicate a fourth goal- it is defined by powerful mirror levels, as well as by the 0.5 value of the Fibonacci grid and is located at $0.71.

After reaching the goal of $300, Monero has already corrected to $265, which coincides with the 0.236 value of the Fibonacci grid, but we believe that this is far from being the limit. With a high degree of probability, this first stage of decline will be followed by a return to the lower register of the ascending channel and correction to at least $245.

At this level, we expect a surge in buyer activity, but pressure from the falling Bitcoin can erase all efforts to protect long-term positions. In that case, the pain limit for investors at the moment is located at the value of $230, which coincides with a powerful mirror level of support-resistance. A deeper correction will undo all previous successes of buyers and greatly damage the reputation of the asset.

Of all the assets listed in the review, Litecoin, as per an unfortunate tradition, is doing the worst. It's not even that the rate of its decline was higher than that of other coins. It’s just that the price failed to form an expanded price channel, so any more or less significant downward fluctuations will break the current one.

In this case, a fall is likely to the 0.382 level of the Fibonacci retracement- namely, to $145. The second target is $137 and, given the presence of a mirror level, can become the final one.

No matter how the situation develops in the LTC/USD pair, after the correction is completed, we still do not recommend trading this asset. A month ago we wrote that Litecoin looked pale compared to more promising competitors- nothing has changed since then.