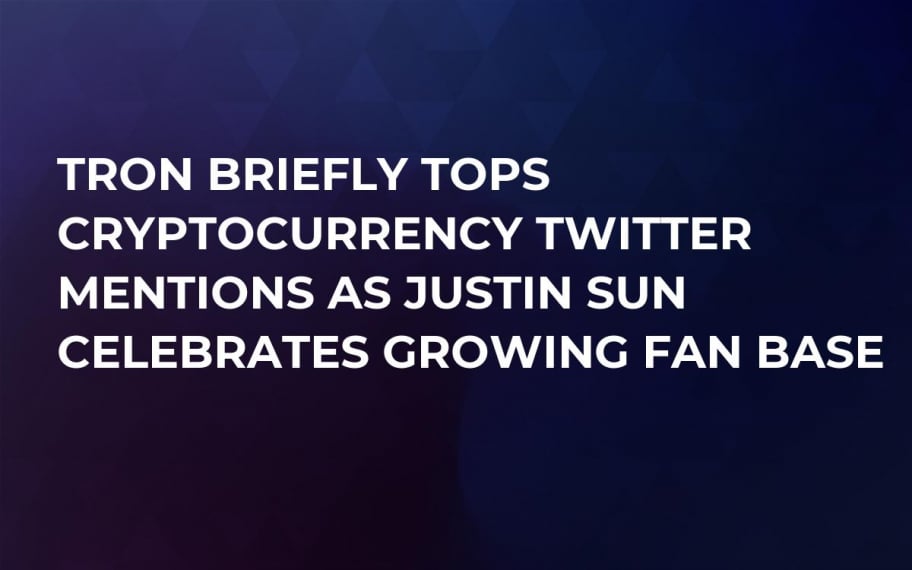 While Bitcoin continues to be the biggest and most widely now cryptocurrency, Tron found an hour in the Twitter space where its mentions outstripped the original digital coin. The news was tweeted by famous co-founder, Justin Sun as he explained that this is a move towards mainstream adoption.

There have been some big moves by Tron recently, including its Tron Virtual Machine as well as updated frameworks of the network which will be compatible with the Virtual Machine.

The Tron dominance came for about an hour over Sunday when the TRX token was mentioned 1,611 times whereas Bitcoin was mentioned a close 1,454 times.

While Tron is far from being as big or as used as Bitcoin, it is showing that there is a growing community that seems to be interested in the latest developments.

The last few weeks have seen some big developments, no more so than the virtual machine, but there have been other additions.

There was the main net swap which was preceded by the Virtual machine, not to mention a Chrome extension as well as Project Atlas which is tied together with the acquisition of BitTorrent

While Twitter mentions won’t help the project succeed, or even raise the price of the cryptocurrency as many asked following Sun’s Tweet, it does indicate that the interest in the outlandish cryptocurrency is growing.

The acquisition of BitTorrent and the growth of the virtual machine are all aimed at expanding the user base and making it more accessible to new users, so for Sun and Tron, this is good news as the interest is palpable.