State of the Chain: Five Winning Use Cases for Blockchain in 2019 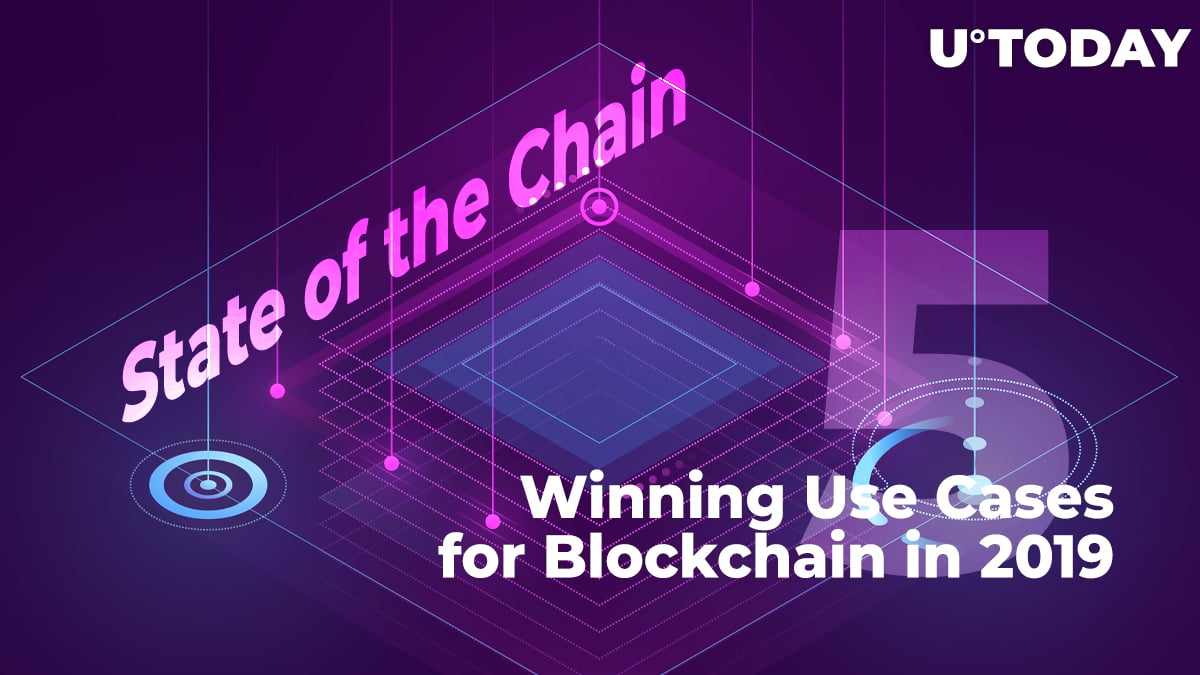 Whatever you think blockchain is, it isn’t. That’s a succinct way of summarizing the state of crypto networks today. The fact that the use cases and narratives surrounding base layer protocols is constantly shifting should not be taken as evidence of vaporware in search of a cause; rather it’s a sign that this is still early, and everyone’s still trying to figure out what blockchain is good for, and what else it can do that we haven’t yet envisaged.

Bitcoin started out as peer-to-peer cash before evolving into digital gold, with some pit stops along the way during which it hosted colored coins, had its blockchain component extracted for enterprises, and was used to secure lesser chains through the security of its Proof of Work algorithm. It’s a similar story with other blockchains: Ethereum began life as a world computer, became an ICO launchpad, and is now being used for open finance. There’s no shame in moving the goalposts to capture the true value of emerging technology, and the fact that everyone’s still deducing what blockchain can do attests to its myriad possibilities rather than a dearth of imagination. Here are five emerging use cases for crypto networks that are likely to shape the narrative through H2 of 2019 and beyond.

Use case 1: eGaming and Betting

First things first: gambling isn’t a new use case for blockchain. Satoshi Dice was one of the first sites where bitcoin could be spent, while Satoshi himself hid the remnants of a poker client in the first Bitcoin code release. It might not be shiny new then, but crypto gambling has at the very least evolved this year, and at a rate of knots. As proof of this, a glance at DappRadar.com’s rankings tells you all you need to know: the third, fourth and fifth most popular dApps from the 2,500+ recorded by the site are all gambling applications, and the two most popular of these are on Tron.

Tron has quietly evolved into the gambler’s network of choice, with EOS coming in a distant second. The most popular dApp in the world right now, WINk, has recorded an astonishing $42.3M of volume over the past week, a figure that would put even the most flourishing of online casinos to shame. 5.7M transactions over the same period and 2,800 users a day attest to its popularity. Of course, WINk’s IEO on Binance Launchpad last month didn’t harm its cause either. Tron gambling dApps RocketGame and Dice have also recorded robust numbers, while six of the top 10 Tron dApps pertain to gambling. Case closed.

Crypto lending isn’t new exactly either, but it sure feels new, what with all the brouhaha this week over lending platforms. Predictably it was Binance that stole the limelight, with the surprise launch of its eponymous lending platform, which was unveiled on Monday, August 26, and then proceeded to fill its initial lending quota of 200,000 BNB and 10 million USDT in a matter of seconds two days later. Binance is by no means the only platform to have latched onto the possibilities afforded by crypto lending, either: in the past fortnight, Dharma and Compound have announced new products, while Coinbase has hinted that this will be the next vertical it expands into.

Crypto lending actually makes a lot of sense, both from the perspective of lenders and borrowers. Lenders can enjoy annualized interest of up to 15%, which is significantly better than the negative rates they are currently offered on fiat savings and on negatively yielding government bonds. Freed from the baggage of the legacy financial system, crypto holders are incentivized to put their assets to use, earning them a return while helping to fund the next wave of entrepreneurs and crypto startups. Crypto lending feels like one of the most natural use cases for blockchain, one which will help the space further establish itself as a fully fledged financial system in its own right.

Crypto networks are only as strong as their weakest link – that’s right, their people. While blockchain nodes are more than capable of reaching consensus, the same can’t be said of the people accessing them, who are prone to falling out at the drop of a hat or getting embroiled in protracted disputes over the rightful ownership of crypto assets. The solution to this problem, it transpires, is to use more people to settle the matter. But not just any ragtag mob: specifically, it’s a problem that calls for crowdsourced jurors. That’s the game theory behind decentralized justice solutions like Kleros.

It turns out that crowds, when they’re not serving as braying mobs demanding vigilante justice, are surprisingly sagacious. Combine their minds, provide a suitable economic incentive, and they’re likely to arrive at the correct and true decision. Dispute resolution isn’t sexy, but it’s an extremely useful service for escrow services, prediction markets, P2P trading platforms and much more.

Right now, you use separate passwords and logins to access each platform you use on the web. In doing so, you entrust these web operators not to abuse, misuse or lose your data – and frequently wind up disappointed. Digital identity solutions have been developed for the leading crypto networks that ensure self-sovereignty of data, which is stored in pods or containers that are shared with web platforms on an opt-in basis.

Through the use of public/private keypairs, users of Web3 protocols can protect their identity, and prevent the risk of hackers accessing centralized databases to steal all their data. Across every major crypto network, digital identity dApps can be found, attesting to the magnitude of the problem being solved, and the relative ease with which Web3 technology can meet the challenge while providing a viable alternative to passwords.

A blockchain is simply a distributed database, and like any database, it can be used to store information of any kind. While people have been encoding random information into the Bitcoin blockchain for years, that practice has since become more purposed. There are now crypto networks dedicated to storing information on-chain so that it is always accessible and virtually uncensorable. One example of this is Arweave, whose “Permaweb” enables web pages and applications to be stored on-chain, facilitating the creation of web content that can’t be censored. The risk of data loss is also reduced, thanks to the permanence of using a blockchain to store multiple copies of each record.

As global censorship ramps up, the need for robust publishing measures that prevent dystopian governments from restricting the free flow of information is paramount. In addition to nations such as Russia and China enforcing strict provisions to curtail their citizens’ access to the open web, incidents of deplatforming and censorship in the West are on the rise. Companies such as Gab.com have found themselves frozen out by hosting providers and ISPs, resulting in downtime as they frantically searched for a new home on the web. The permaweb holds out the promise of a solution to the overreach of platform censors and free speech opponents.

The Future of Blockchain

Just as only a handful of visionaries such as Hal Finney foresaw what Bitcoin would evolve into 10 years ago, it is virtually impossible to predict how crypto networks will be purposed in the future. Narratives shift, trends change and use cases enter and exit vogue. While it’s almost certain that there will be demand for the applications outlined here, one decade from now, they’ll be supplemented by many more. No matter how many iterations blockchain technology undergoes, its value proposition will remain unchanged: as an independent database that anyone can access, verify, and trust.