Alexander Goborov
While some bemoan the pains of the bear market, some see it as a big opportunity: here is our short guide on what to consider when starting a Blockchain business 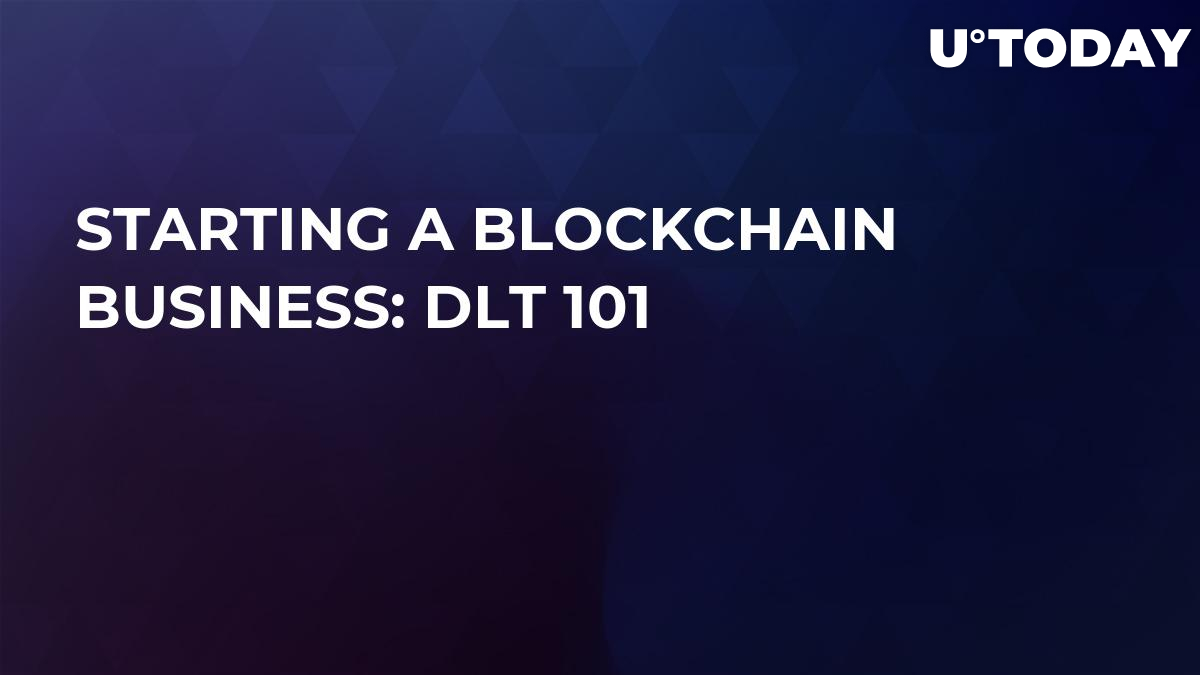 With the market still down, some less experienced crypto folks may see it as a sign to pack up and head home. We’re done here, they say... In fact, nothing could be further from the truth. To reuse one of John D. Rockefeller’s most famous quotes:

“The way to make money is to buy when blood is running in the streets.”

Now is as good a time as any, or perhaps even better, to invest. And bear in mind (no pun intended) that Blockchain and DLT are not the same as cryptocurrencies. Granted, digital coins are based on the Blockchain technology, but that is not to say you must become a crypto trader in order to become a Blockchain/DLT business owner. One can have a lot to do with the Blockchain and have virtually nothing to do with Bitcoin.

The importance of this initial step on one’s journey to success cannot be underestimated. The very first rule of investment is not to invest into anything you don’t know, so before leaping ahead make sure you fully understand what you are getting yourself, your partners, and your customers into.

And remember, just because you happen to own some digital cash, which your friends probably talked you into buying, does not mean you understand the actual technology behind it. One needs to be diligent and do their homework first, only then will there be a feasible chance of success.

Here are some basics to get you started: 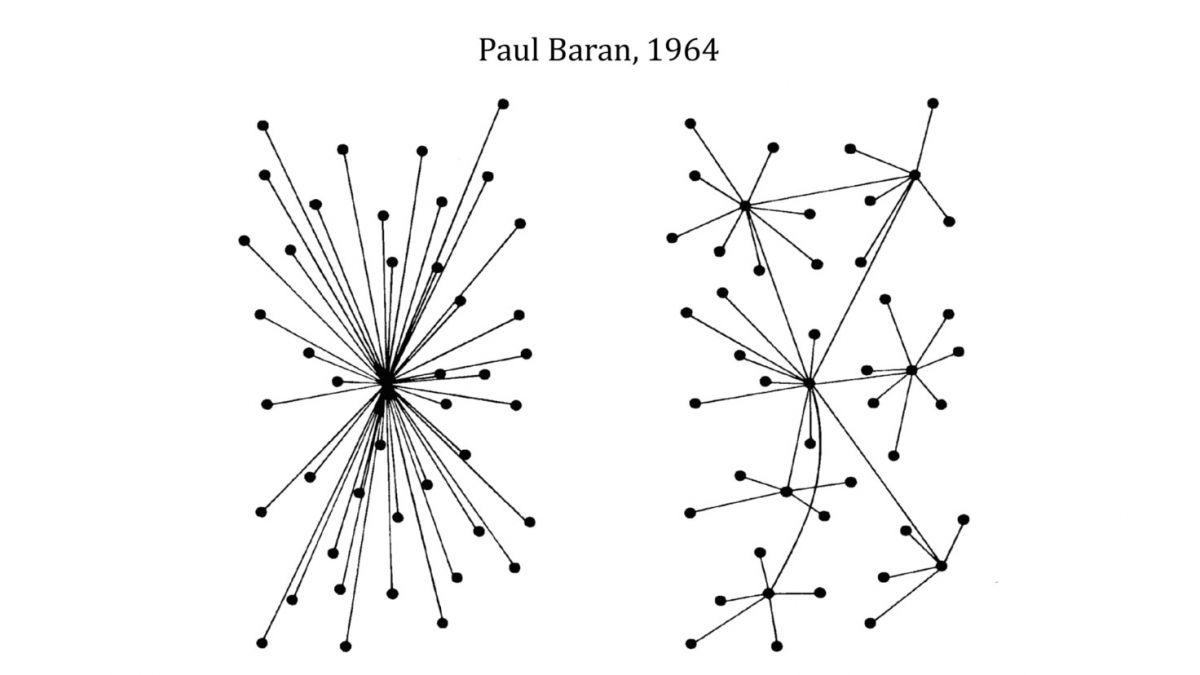 The image above published in 1964 by American engineer Paul Baran in a research paper which examined distributed communications is probably the first depiction of the decentralized nature of Blockchain/DLT networks. Incidentally, also note that, while some computer scientists may disagree, here we are treating Blockchain and DLT (Distributed Ledger Technology) as being interchangeable terms for simplicity purposes.

In a nutshell, Blockchain/DLT is basically the storing of data in a block which is then linked or “chained” to another block, thereby forming a chain, which becomes almost like a digital conga line. The key feature of this type of technology is that there is no one center as such, and, hence, the network is ”scattered” or “distributed”.

What we have in Blockchain today is the result of three pivotal concepts with their original authors listed in parenthesis:

All three were synthesized by Satoshi Nakamoto in his groundbreaking 2008 paper, which paved way to Bitcoin. The new payment system proposed to use a digital ledger of records arranged into chunks, i.e. blocks, which would be verified by those involved through proof of work and linked together using crypto validation. And since hash functions are used, any input of data can be represented via an arbitrary 256 character output.

This may be puzzling to a non-computer scientist. But if there is one lesson that should be learnt by everyone here is that Blockchain is not a business model but rather a pioneering method of exchanging and storing data, nothing more.

Recognize What It Can and Cannot Do

What Blockchain/DLT has is this: data are not stored in any one place since there is no network center as such. The whole mechanism thus becomes arguably more transparent and efficient. While some are claiming that Blockchain/DLT is the future of mankind, which in some ways it might be, it is certainly not a universal answer to all of today’s technological obstacles, let alone commercial ones. Nevertheless, surely this technology can be useful in the following ways:

Vast amounts of data can be stored securely, in pretty much any format, and shared only when necessary, only with selected parties, whether a company or individual. Applications can range from filling out and notarizing forms to setting up user accounts. Digital signatures and public/private keys are used to access this information. As a user, you get protection. As a business, you get that, plus you save a great deal of time.

If, for example, some important document gets misplaced along the way, say in an international cargo transportation scenario, it can delay the whole process enormously in a traditional commercial setting. In contrast, this would not pose a problem in a Blockchain setting, as every transaction and contract would have a permanent record, instantly accessible by everyone concerned. Furthermore, because of the aforementioned hashing, the fact that a document has not been tampered with in any way can also be easily verified.

While obviously they have a lot to do with the first notion as well, this is where crypto coins really come in. Paying bills, making exchanges, buying, selling, investing, saving for retirement, you name it, all of that is possible through a tokenized system of altcoins (made by the network itself, with their own value) or stablecoins (which are a pegged in value against fiat currencies, e.g. USD).

Because of the nature of the chain, i.e. each block numerically referencing a previous one, all of the transactions are set in stone with records kept all throughout the network, so the same unit of digital cash can never be spent repeatedly. In other words, you can never send or receive the same digital dollar twice, which makes transactions both fast and secure, and, crucially, without any intermediary looking on, e.g. a bank.

These are basically automated business processes, which are currently being developed and fine-tuned. Rather than having to follow through every step by hand, as it were, you let the process run itself completely.

For example, you as a business want to buy 10 tons of blood oranges from Spain. The other party claims that they can find the product and deliver it. You agree on the sum, which has been reserved on the Blockchain, and on the conditions that have to be met in order for them to receive the payment, e.g. exact species of fruit, the weight of each one, form of delivery, due date, etc. The rest is pretty much code. Now the contract does the work. If the conditions are met, the payment is sent; if not, the contract is void.

This is, no doubt, a more efficient way of doing business, which becomes yet more apparent when you consider that many companies have to deal with thousands of such contracts simultaneously.

This may come as a surprise to you, but according to one fintech executive:

“The number one issue facing the Blockchain industry today is a lack of talent.”

While salaries offered to developers are going up as these individuals are much sought after, the professionalism of output does not always follow. The reason being is that businesses, especially smaller ones, often hire freelancers or sometimes simply friends of friends to write code for them. So, whereas lucrative offers and individuals willing to take them up are in abundance, at the same time, the number of those who can execute Blockchain type programming truly well is, in fact, comparatively low.

If your business, for example, wants to develop a smart contract to be run on Ethereum or perhaps a dApp (decentralized app), then your programmer must be Solidity literate. While this programming language is syntactically similar to the now ubiquitous JavaScript (i.e. in terms of symbols and commands), it differs from the latter in important ways, in that the architecture of the system itself is different, and the programmers need to be well familiar and experienced with what that difference entails.

According to some experts, in order to get a solid dApp ready―clean, dependable, and fool-proof―a business would need to hire at least two teams (or more) of at least five programmers in each one (or more). That’s already 10 individuals, as an absolute minimum, who must know a whole lot not just about programming but about the Blockchain technology. Finding those can often be a huge challenge, especially on a limited budget.

If you’ve done a substantial amount of thinking and are now ready to start your Blockchain business, you should not rush. The first thing to do now is to go back and double check that you actually have a clear picture in your mind of what you are going to do, how, and, importantly, why. Another concurrent thing is staying up-to-date: this field is modern and not at all static, so you constantly need to keep your eyes peeled for where the latest developments are being assembled.

At the same time, remember that not everyone in your camp, be they partners or customers, may be on the same page with you, which is especially true of incorporating DLT into existing businesses. What you should absolutely not do is pressurize people. They will come around soon enough, once the picture in their heads is as clear as it is in yours. And if they don’t, perhaps they have their reasons; after all, not every business needs this type of technology. You should be honest with yourself and those around you about your goals and intentions.

Tenacity and patience are also crucial when it comes to executing your goals technologically. Not only should you not trust any third-party software whose origin or indeed true function you can’t distinctly verify, but also, if you are building something of your own, you need to test and retest many a time before proceeding with a launch. And of course, even before that, the team itself has to be put together first, as mentioned earlier, which can take a while. Haste makes waste, no doubt about it. And the repercussions of rushing to drive an underbuilt, three-wheeled car can be very serious.

If you want to start a Blockchain business or re-frame an existing one, you need to understand which processes exactly you want to position onto the Blockchain. This understanding can only come as a result of your understanding of the underlying technology itself. Once you’ve understood what this technology is capable of and which of your business processes can be DLT-based, you need to work out precisely what benefits will be supposedly brought to your business, new or old, in the aftermath of this decision, as opposed to having the whole thing run “traditionally”.

Finally, remember that Blockchain isn't going to solve all your business problems. Some (or even many) issues this technology simply cannot tackle. DLT isn’t some sort of digital magic serum that cures all. At the same time, this technology also has its drawbacks. In certain cases, cyber attacks are actually more likely to penetrate decentralized systems with its smaller digital fortresses compared to one giant fortress of a centralized system with its thicker and taller walls. So, while some types of security are definitely there with the DLT, this technology is not immune to breaches and violations either. Nothing is ever absolute.

Be that as it may, DLT/Blockchain can certainly be a giant game changer for some businesses and even whole industries, so if you are up to the task, find the right people and the right tools, and go for it.