Six Employees from Facebook, Netflix, Apple, etc, That Switched to Jobs in Crypto

Yuri Molchan
A recent trend shows that the crypto industry is luring high-performers, not only from top banks but from centralized IT-behemoths, too 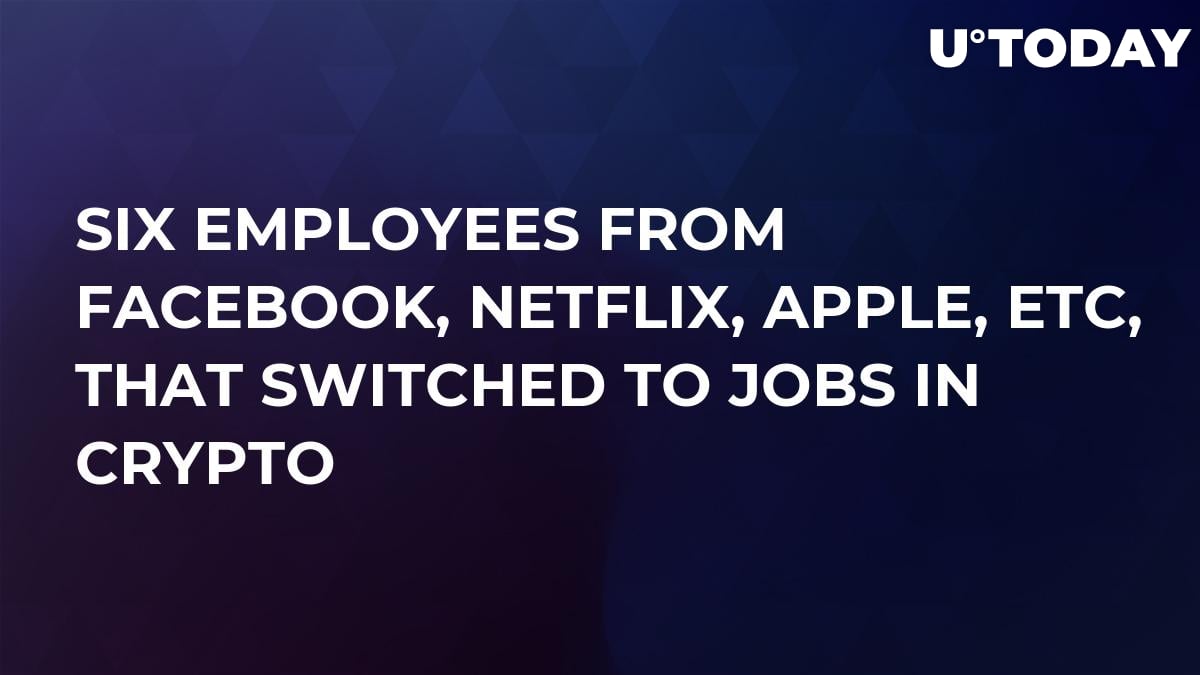 A co-founder of AngelList wrote back in spring that the blockchain industry is drawing top-notch pros from Silicon Valley quicker than any other innovative sphere since Internet appeared.

This has been true even despite the hard bearish sentiment that has been dominating the market throughout the year. Among those who decided to dump their secure life working for global IT-giants are those who used to hold high positions at the FANGs: Facebook, Amazon, Netflix and Google. These people have ventured supporting blockchain and crypto startups with their time and effort. Let us see who they are and where exactly they went to, dropping their previous secure and highly paid positions.

Before Kahina van Dyke got the position of a senior vice president for business and development at Ripple, she had a few impressive jobs on her CV that any high-performer can envy: Facebook, Menlo Park, Citibank and Mastercard. But since quite many people in the crypto industry consider Ripple to be a centralized platform, which in addition aims to work with top banks to help them conduct payments with XRP globally, one may say that Kahina van Dyke has chosen a job along more or less the same lines — she just went to a different company.

Related
Ripple Pushes to Become Base Currency on Binance

Van Dyke set off to Ripple in June, saying she believes that the platform has the potential to help banks and ordinary users get rid of the hindrances that make transnational payments extremely slow and expensive.

Chen used to be part of the team at Amazon Web Services (AWS), the cloud division of the online retail giant, and joined Harmony. This is a consensus platform that keeps working on its development and aims at quite high results in the industry overall.

His interest in crypto began back in 2012, when he invested in Bitcoin, making some good profit and then got interested in Ethereum. Chen admits that working for Amazon, he learned some very useful software architecture and that it can be a basis for building a secure and high-performing blockchain platform.

Harmony gets two points here. Kothari works as an engineer there, and he was also a co-founder. Harmony’s team seems to be packed with people having a FANG background, and this proves a simple basic principle true for many crypto startups: if you find one former FANG worker there, you will certainly bump into more of them on the same team.

Kothari had worked for Apple for three years, and his responsibilities included working on Siri, the voice assistant. But later he decided to set up his own shop. He believes that blockchain can transform the world and help data to become decentralized for everyone’s benefit.

What Ryan Lechner does in ConsenSys Labs is that he manages the numerous investments that this ETH shop, located in Brooklyn, has made. At Netflix, he was trying to expand the strategy of non-fiction content.

He joined ConsenSys Labs after listening to a podcast about the transformation that DLT and crypto can bring to the world; this added to his previous thoughts about these two innovative industries and made him leave Netflix to join the crypto startup in 2017.

Dumped his job at Google to work for OKCoin

Feinberg holds the position of Director of Business development at the OKCoin crypto exchange. Actually, this is not his first ‘crypto job’. After he left Google, he joined a startup named Petram Security.

He admits that his interest in crypto is a financial one. Once, his friend told him over dinner that he had invested in virtual assets and made some good profit. So Feinberg thought that people who share his world view outside Google are wealthier than his colleagues who see life at a different angle. He left Google earlier this year.

Lodha gave up his position of product manager at Google in the middle of 2017. He admits that he had dealt with crypto before but was pretty skeptical about it, treating it as a hobby. But then crypto began to grow in price and Lodha began to take it serious.

Together with another ‘Googler’ he got an idea of a startup working in the crypto sphere. He admits that his work for Google gave him the necessary experience in focusing on customers to make user-friendly and simple products for them.

It is difficult to say whether this trend will continue now that the market remains bearish, since as one can see above, not all of the people going from traditional tech into the crypto/blockchain sphere do it based on belief and enthusiasm.

Some of them are attracted financially by the possible results. As it often happens, almost any industry is first of all based on the enthusiasm of its workers. Because if there are no big profits for a long time, those who chase only finance and benefits will move on somewhere better, and only those who truly believe what they do will stay. Time will tell if they succeed.