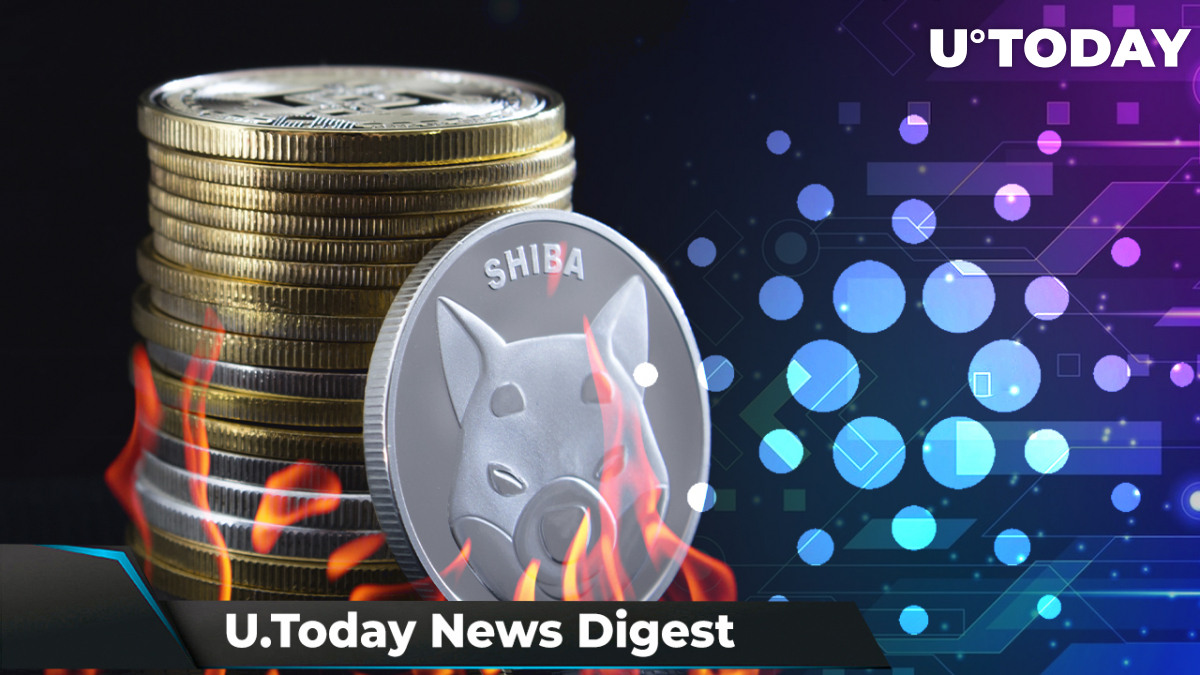 U.Today has prepared the top four news stories over the past weekend.

The Shiba Inu cryptocurrency can pride itself on two major milestones reached last week. First, according to the Shibburn data, the burn rate of the Dogecoin rival increased by 189.16% on Thursday, June 2. At that time, Shiba Inu supporters destroyed a total of 141,010,050 tokens, which took merely six transactions. The second milestone concerns the number of SHIB holders. According to another blockchain data platform, WhaleStats, the SHIB holder count has demonstrated growth to 1,198,132 holders. However, in this regard, Shiba Inu trails another meme coin, BabyDoge, which counts 1.5 million holders.

Related
2.5 Billion SHIB Burned in Past 7 Days, While Shiba Surges 14%

Veteran trader Peter Brandt has responded to a prediction by Cheds, a pseudonymous cryptocurrency trader and analyst, which states that Bitcoin could plunge to as low as $12,000. If that is the case, Brandt said, it would be the first time a correction goes below the previous all-time high, and the fourth correction of up to 80% since 2011. While Bitcoin is struggling to return to the $40,000 zone, crypto experts and influencers continue dropping bearish prediction bombs. Last month, Guggenheim Chief Investment Officer Scott Minerd forecasted that the BTC price could end up falling to as low as $8,000. Bloomberg’s Mike McGlone sees the Fed’s hiking of interest rates as the main headwind for Bitcoin.

At the moment, the flagship crypto is down 56.92% from the record high of $69,044 that was achieved seven months ago.

Ethereum founder Vitalik Buterin asked the community what they disagree with him the most about in a recent tweet. The post has quickly gained attention among ETH enthusiasts, scoring more than 4,000 likes and 1,700 retweets. It was not long before the most reputable members in the community shared their opinions. Ethereum co-founder Anthony Sassano believes that it was a mistake to give Dogecoin legitimacy. Angel investor Mariano Conti disagrees with Buterin’s idea of extending the human lifespan. Hudson Jameson, a software engineer who joined the Ethereum Foundation back in 2016, believes that Buterin’s avoidance of political topics was a mistake since everything is becoming politicized.

The asset has performed poorly so far in 2022, but the much-anticipated upgrade might provide a much-needed positive boost.

CoinShares reports funds from institutional investors flowing into Cardano as demand for the network is on the rise following many releases and solutions. The report also highlights institutional funds’ reallocation rate; thanks to ADA gaining more confidence among institutions, Ethereum and Solana are now being actively drained. At the current pace, in the next few months, the volume of ADA held by institutions will exceed Ethereum holdings. The most likely cause of the outflow of funds from Ethereum is recent issues with Beacon chain on the mainnet after the Merge. Security concerns could become a massive issue for investors, especially institutions.