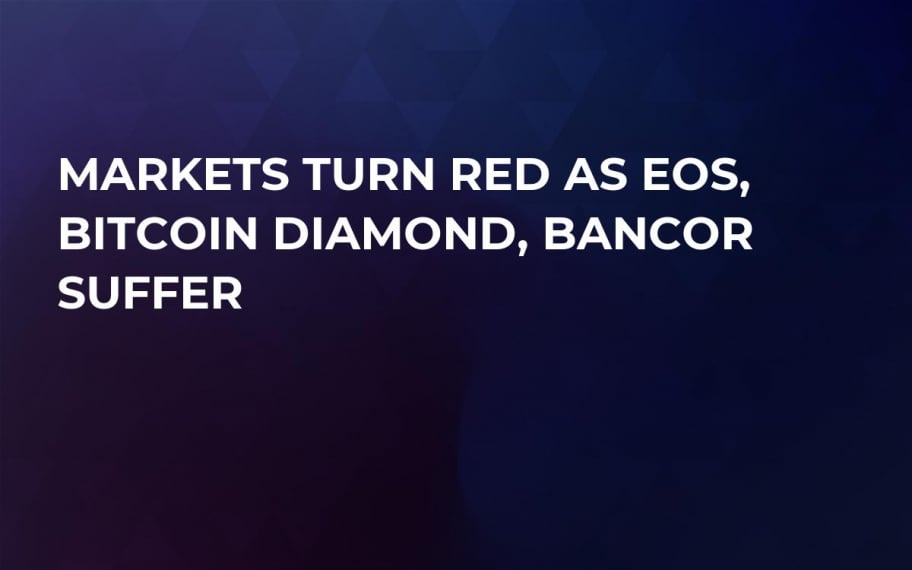 After a few days of ralling which saw Bitcoin head towards $6,800 the cryptocurrency is mostly in the red with a number of coins suffering massive losses. The likes of Bitcoin Diamond and Bancor the biggest losers with the latter suffering backlash from a hack.

Only seven coins are in the green, with the best performer being Bitcoin Gold, which is up almost six percent. But in terms of the major coins, they are all down, but not as bad as some of the altcoins.

Bitcoin has lost just over a percent over the last 24 hours, with Ethereum, Ripple and Bitcoin Cash losing between three and four percent.

There is really bad news for Bitcoin Diamond as the 39th biggest coin by market cap shed more than a quarter of its value in 24 hours. This loss comes after a massive spike saw the Bitcoin fork double in value this week, going from $2 to $4 in two days. The fall back to $2 however only took 30 minutes.

Bancor is another obvious loser today as the so-called decentralized exchange suffered a hack that saw $23.5 mln disappear from its online wallets. It is confusing and surprising as one of Bancor’s key aspects is that it is decentralized, however, that should preclude hackers from making off with any funds.

Others that have had notable losses include EOS which is down 12 percent over the past 24 hours shedding 12 percent to trade at $7.58. From its all-time high of $21.50 just two and a half months ago, it has lost 65 percent.

Mainnet, wallet, and centralization woes have been the root of this fall from what was once dubbed the ‘Ethereum killer.’

Winners on the day

Somewhat ironically, the best performer over the last 24 hours is another Bitcoin fork, Bitcoin Gold, which picked up gains of over five percent. It is joined by Tezos which has grown four percent in the last 24 hours.

Tezos price has almost doubled since the weekly low of $1.20 on Friday as the former ICO record breaker starts to get its house in order.

John Lennon's Son: Bitcoin Has Given Me More Optimism Than Anything Else This Year
News
2 days ago

Mike Novogratz Hasn't Dumped His Bitcoin Above $19,000
News
1 day ago

Peter Schiff Insists PayPal Should Have Chosen Gold Instead of Bitcoin